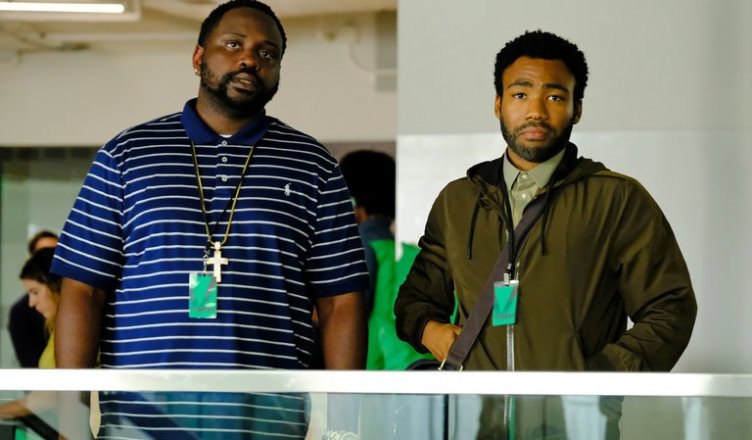 This recap contains spoilers from Season 2, Episode 2 of “Atlanta.”

During the opening of this week’s “Atlanta”, Alfred (Brian Tyree Henry) learns the “robbin’ season” lesson the hard way. In a meeting with his drug dealer, Black (Marcus Samuel), all seems fine at first. Before getting into business, they exchange small talk that feels routine. Black apparently knows Al’s usual order, and he should, as we learn later that Al’s been buying from the guy for 10 years. Even though Al’s been a loyal customer, it seems his wallet is more valuable than his loyalty as Black pulls a gun on him. However, the robbery that ensues is almost as casual as the conversation that precedes it. Awkwardly apologizing all the way through the theft, Black also steals Al’s keys to make sure he can’t be followed when he drives away. This leads to one of the episode’s best visuals: Al walking home defeated as Black pulls up beside him, matching Al’s sluggish pace in his vehicle, to gracelessly apologize, still pointing a gun at his face. “I’m-a pay you back, man,” Black promises in an attempt to console Al, whose expression remains unchanged, frozen in annoyed disbelief.

It’s a wonderful sequence, and like last week, it uses a robbery to set the tone of the episode. Unlike the season’s premiere, however, there are no bullets or bloodshed. Instead of drugs being stolen, we have a drug dealer who does the stealing. It’s the total opposite of what we saw before, feeling less like the cold open of a “Law & Order” episode and more like the “‘Curb Your Enthusiasm’ for rappers” description Donald Glover has given for the show. It works because “Atlanta” so adeptly understands how to balance tones from week to week and scene to scene without ever feeling jarring.

While the show returns to its more comedic side, “Sportin’ Waves” also reinforces one of the show’s most prominent themes, “play the part.” If you want to succeed in a world run by the predominantly-white corporate executives and wealthy elite, you have to please the most powerful demographic. For Al, whose successful rap career as “Paper Boi” is nearly inescapable in his increasing public life, there’s always conflict between what it takes to “make it” and what it means to stay true to himself.

This conflict comes into play when Al and Earn (Glover) meet with an Atlanta-based music streaming service that wants to court Paper Boi to their brand. The building’s interior is the perfect stock photo representation of “millennial office space” decked with ping pong tables, doodled walls and a surplus of surrounding glass. Despite its intended wide appeal, Al’s more uncomfortable in this space than under a shady bridge when he met with his drug dealer. While they’re there, Al and Earn are introduced to the head of music outreach Peter Savage (Jason Burkey). At Savage’s office, Al jumps through hoops to commercialize himself, to perform as a brand for their brand. During a recording session for some streaming ads, Al is told to act cool, “like you’re at a party, and everything’s crazy.” The direction tests his patience, and his unenthused line delivery doesn’t get much better, if not intentionally worse. And after being asked to do a concert for the workers in their lifeless desk area, he hands off his microphone to an employee mindlessly eating a banana, a literal refusal to continue performing. Time and time again, Al shows that he’s not interested in the rap game when the cost is his freedom of expression.

Within that same office, Al meets his perfect opposite, Clark County (RJ Walker), a reflection of everything Paper Boi could be. Sporting a hat, overalls, a mustache and a goatee, Clark is the mirror image of Chance the Rapper. Taking every opportunity at Savage’s office that he can get, Clark jumps at the chance to network with Savage and take publicity photos, and it’s his eagerness and willingness to play the part that earns him a major television commercial spot for Yoo-hoo. Clark’s hilariously accurate jingle is a clear send-up of recent corporate partnerships with rap artists, such as Sprite with both Lil Yatchy and Vince Staples and even Kit Kat with Chance the Rapper. While both Al and Clark met on the same playing field at Savage’s office, there’s a reason why in the final minutes of the episode, Clark’s the one on TV and Al’s the one on the couch because, at the end of the day, you’ve got to play to get paid.