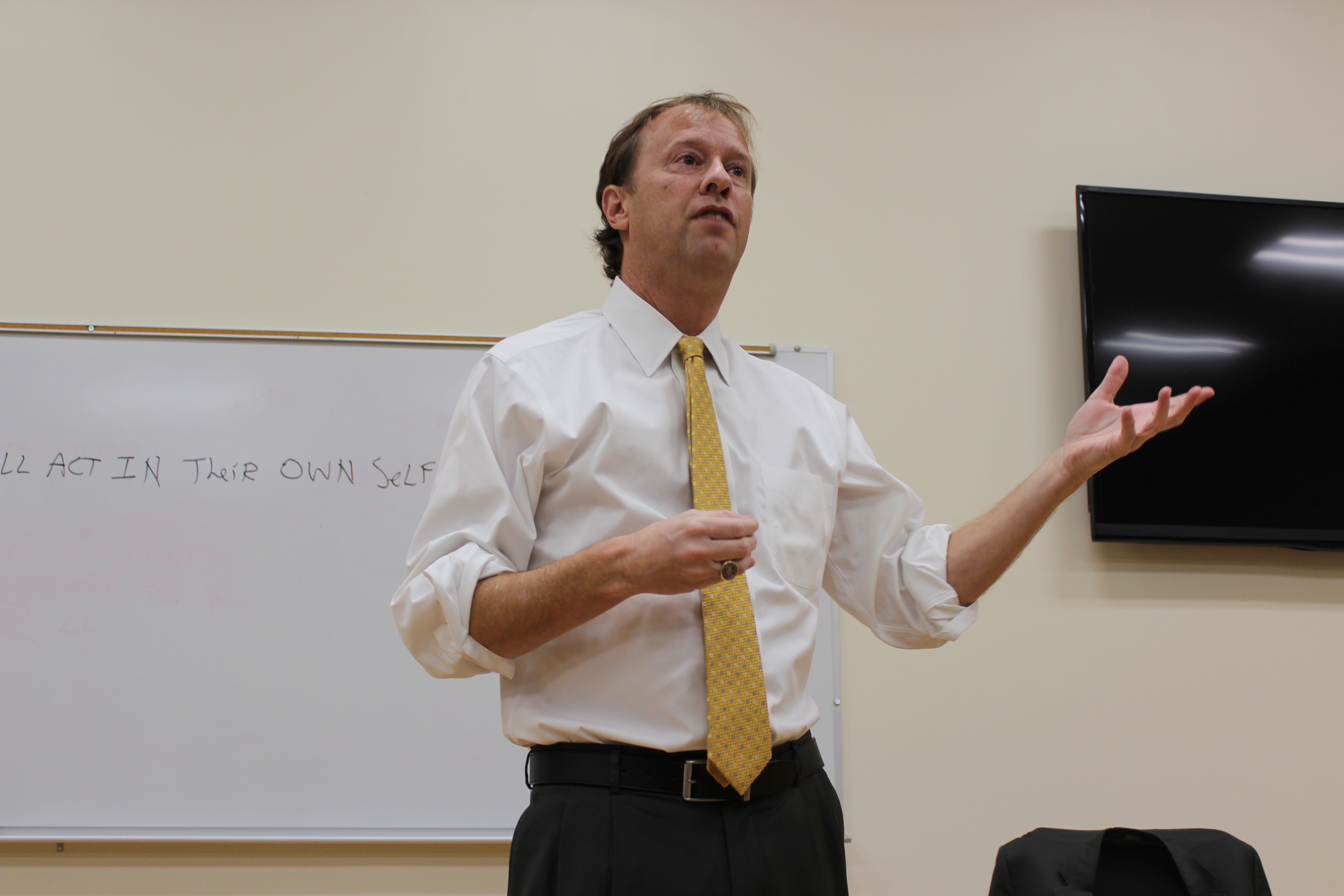 The senator said he did not vote for President-elect Donald Trump; he voted for a third-party candidate instead.

However, Brochin, a conservative Democrat who represents Maryland’s 42nd district, said he agrees with some of Trump’s proposals, namely his promise to reform the Affordable Care Act.

“I can tell you firsthand Obamacare is fatally flawed and almost incoherent to deal with and is broken and needs to be fixed,” he said.

Brochin said he believes the LGBTQ+ community and other minority communities will be fine.

“I think we’re going to have to fight if we want to get our country back,” he said. “With that being said, I do think we should give this president a chance.”

These comments came during an appearance with professor of rhetoric and communication Richard Vatz’s persuasion class on Nov. 15 in Burdick Hall.

For sophomore Jessie Jones, however, fears of a Trump presidency are very real.

“My stepbrother is Muslim—he’s three—and I’m terrified about him entering school under a world that accepts white nationalism,” said Jones, a mass communication major.

Brochin did express his concerns with Trump’s lack of knowledge about NATO and foreign policy, and said this could potentially lead to an abuse of nuclear weapons.

Brochin said he doesn’t believe the majority of Trump’s supporters are prejudiced. Instead, he said they are industrial workers in the Rust Belt who have been hit hard by factory closures and a constricting job market; those voters saw Trump as the answer to their problems.

“It doesn’t mean that people who voted for Donald Trump are all racists or all misogynists or all whatever else you want to call them,” Brochin said. “There are some. There are a lot. But I have a lot of friends of mine who voted for Donald Trump and I know them—and unfortunately I’m related to a few of them—and they’re not misogynists, they’re not racists.”

Brochin said he believes part of Trump’s success was his ability to empathize with voters’ anger, pain and sense of familial duty.

“Their self-interest was a monetary self-interest to feed their families and send their kids to camp in the summertime and to have a car and a mortgage and a house and all that.”

The senator said Trump’s empathetic salesmanship allowed him to win over white female voters, despite the leaked tapes of Trump describing his ability to get away with sexually assaulting women.

Brochin said Trump adopted a pro-life perspective to monopolize the votes of pro-life voters, rather than splitting pro-choice voters with Clinton.

Brochin also said Trump’s win was due in part to FBI Director James Comey’s announcement of further investigation into Clinton’s emails two weeks before the election.

Until the announcement, Brochin said the elections had been framed around the leaked tapes, Trump’s treatment of former Miss Universe Alicia Machado and other instances of the candidates

“I don’t have empathy for Hillary, but I do think that Comey flipped the entire tone of election and probably cost Hillary the election,” Brochin said.

He said although Comey eventually announced that nothing had been discovered during that further investigation, the initial announcement caused Brochin to vote for a third-party candidate.

Had Maryland been a swing state, however, Brochin said he would have voted for Clinton.

Brochin condemned Comey’s announcement as a possible violation of the Hatch Act, which prohibits officials in the executive branch of the government from participating in political activity.

He questioned why the director didn’t wait until after the completion of filtering the emails recovered through the investigation of Anthony Weiner, husband of Clinton aide Huma Abedin, to determine whether an announcement was necessary.

Jones questioned Brochin about Trump’s selection of Vice President-elect Mike Pence, who supported conversion therapy, a form of shock therapy used to “turn” LGBTQ+ people heterosexual but instead has led to increased rates of suicide.

Brochin maintained a wait-and-see attitude toward Trump’s actions and appointments.

“I say give him a chance as far as if he can govern from the middle,” he said. “And if he appoints somebody who has the decision-making on conversion therapy and can ram it down people’s throats, I think you should take to the streets.”

Another student asked Brochin about his impression of Trump’s appointment of Stephen Bannon, the executive chairman of Breitbart News who has a history of white nationalism, as his chief strategist.

Brochin called people’s dissatisfaction with the looming Trump presidency “reflexive negativity” and urged people to remain unified and open-minded until Trump has been given a chance.

“We’re all in this together, one way or another, and we’re a very very divided country,” he said.