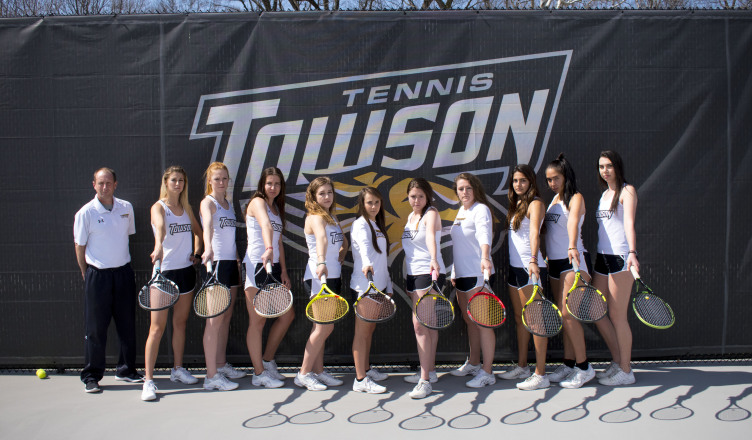 Towson completed its fifth match in four days with a tough loss to George Washington on senior day at the Tiger Tennis Complex Sunday afternoon.

The Tigers had previously won three of their last four matches, defeating University of Maryland, Eastern Shore, and Coppin State Friday along with Johns Hopkins Thursday, but falling to No. 47 William & Mary Saturday.

“The five seniors have been the backbone of this team that has taken this program to heights it has never seen,” Peterson said. “All of the girls have had significant individual wins over major Division I teams and won clinching individual matches when the team match has been tied 3-3. I can’t say enough about their accomplishments on and off the court, including their strong academic showing over all four years.”

The Tigers jumped out to an early lead by winning the opening doubles point, spearheaded by No. 3 Vasilkova and Lucy Gloninger beating Victoria Kogan and Kamilla Beisenova 6-2. At No. 2 doubles, Gomer and van Oorschodt found themselves down 5-2 to Sara Grubac and Julia Herlogsson, but fought back to level the set at 6-6 and force a tiebreaker. They would go on to win 7-6 (2), clinching what would be the Tigers’ only point of the day.

The Colonials prevented the doubles sweep, as Maria Siopacha and Melis Bayraktaroglu defeated No. 1’s Jane Shusterman and Lucy Williams 7-5.

Towson kept it competitive in singles play, as they won a set or forced a tiebreaker in four of the six matches, but the team could not match the consistency of George Washington.

“We had every opportunity to win the match, with winning the doubles point and lots of first sets,” Peterson said. “They’re very fit and make lots of balls. We couldn’t get over that edge, but it’ll prepare us for our future battles coming up.”

Saturday afternoon, Towson could not overcome No. 47 William & Mary, the CAA’s powerhouse team, and lost 6-1 at the McCormack-Nagelsen Tennis Center in Williamsburg, Virginia.

No. 6 Gloninger pulled off an impressive 2-6, 6-0, 6-4 comeback win over Charlotte Madson to give the Tigers their only point of the match.

“We lost the doubles point and some quick first sets, but we came back and fought hard, which are the characteristics that we need to have even if we end up losing,” Peterson said. “Their coaches were highly complementary of our players.”

The Tigers gave up just 10 games to the Eagles through both singles and doubles, and only gave up three games to the Hawks.

“It’s always nice to have a bit of an easier match, where there’s not as much stress involved,” Peterson said. “We’ve got to come out and represent, with good attitudes and energy; you’ve got to play the same way.”

The Tigers took two of three doubles flights to win the opening point of the match over the Blue Jays. They would go on to win four of the six singles flights to clinch the dual match before the courts’ lights went out and play was halted.

“They’re the same kind of team [as George Washington] — they make you play a lot of balls,” Peterson said. “We didn’t give up a point, and only gave up one set.”

Towson looks ahead to the home stretch of their spring regular season this week, with their Colonial Athletic Association (CAA) seeding resting on the results of their next few matches.

The team will travel to Villanova Tuesday afternoon before returning home to host CAA rival Delaware Wednesday at 3 p.m.

Later in the week, Towson will travel south for its final two conference matches of the regular season, as they take on UNCW Sunday afternoon before facing College of Charleston Friday morning. The team wraps up its regular season with a home match against Bucknell next Tuesday at 3:30 p.m.