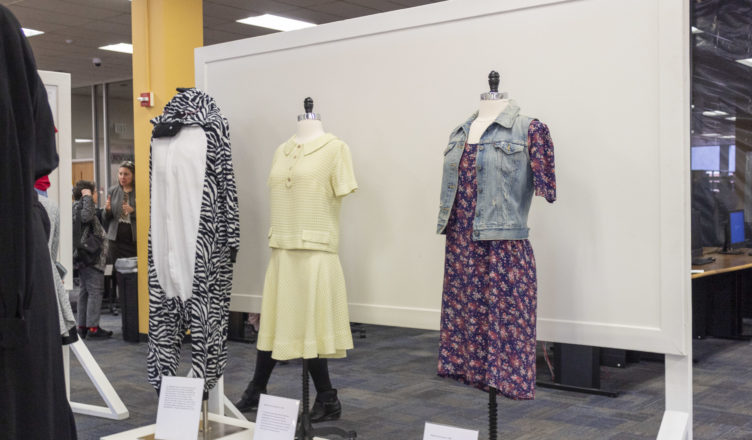 The poem “What I Was Wearing” by Mary Simmerling inspired the installment, which has since been featured at several other schools.

Julie Potter, a Towson University associate professor in the theatre department, and TU alum Molly Cohen saw the exhibits being done at other universities and loved it. They brought it to TU for the first time this year and altered it to incorporate local stories throughout history, adding the “Weaving a New Narrative” portion.

“We added Weaving a New Narrative because I feel like this was like five years ago that the first one was done and we’ve been doing some good work in this area of raising awareness and starting to see that this is really a misconception that the victims have anything to do with it,” Potter said.

According to Potter, the exhibition includes eight local stories of sexual assault along with the replicas of clothing of victims in the Baltimore community throughout history dating from the mid 1800s to the present. The variation in clothing and similarities among their stories demonstrates the clothing of the victims never had anything to do with their attack.

Potter and Cohen accumulated the stories by sifting through roughly 200 archived articles from the Baltimore Sun, picking ones they felt were most relevant. Then, they conducted interviews of prior Towson University students and community members to get modern stories.

“Then I went through the historic clothing collection that we have over in the theatre department and went through those clothes and tried to find clothes that were appropriate to the situation and the age of the person,” Potter said. “Often in those news stories there is no description of the person except for their age.”

Potter also pulled in TU Web Services Librarian Julia Caffrey and Assistant University Librarian for Development and Communication Joyce Garczynski, who she said were instrumental in the programming for the exhibition.

Caffrey created an animation for visitors to focus on their breathing while listening to the stories of victims and how they reclaimed themselves in order to live the life they do now.

“This is [the] ‘Breathe with the Shape’ animation that I coded,” Caffrey said. “The ‘Breath with the Shape’ is intended to help people re-center and refocus and invite them to leave feedback about the exhibit.”

The installment was built on moveable boards and platforms, making it easy to transport, set up and reuse.

“One of my thoughts was to build it in kind of this movable way so it could come back again,” Potter said. “It could even move to a different school. We have plans to remount it at UMBC next year.”

The exhibit is sponsored in part by the Maryland Humanities Major Grant Project, which Potter and Grant received after applying for various other grants. Cohen also won the Undergraduate Creative Inquiry Research Grant in her first semester of her senior year in the fall of 2017.

The undergraduate grant provided funds to do the project on campus, and the Maryland Humanities Major Grant Project gave them the resources to do so.

“What’s so important to us is that we get to support community driven ideas,” said Phoebe Stein, the executive director of Maryland Humanities. “We run the state’s book club, we have 11 other programs, but with the grants program community members come to us and say what they want to do and we can support that.”

Cohen hopes that with the help of Towson’s Sexual Assault Peer Educators and health center, they can help spread word of the resources available on campus.

“From how to report if you have experienced sexual assault to just who you can talk to or different groups and things like that as well as education about sexual assault support and steps to survivorhood,” Cohen said.

Caffery said that after talking to sexual assault survivors, she knows they are often asked what they were wearing and feels it is time to move past that question.

“I’d like to see for visitors to come out with an awareness that clothing, while it plays such a huge role in how we portray ourselves to the world, in the case of sexual assault it’s not related to, correlated to, or causing of someone to be sexually assaulted,” Caffrey said.

The installment will be displayed all month in Cook Library.