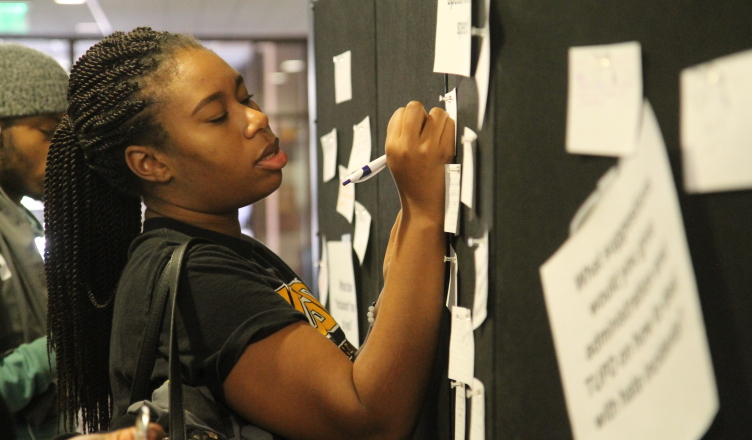 Towson University’s Student Government Association officially relaunched the #NotAtTU campaign Nov. 29 and 30 to provide information to students about maintaining and promoting an inclusive environment on campus.

Ford, who organized the relaunch tabling event, said the purpose of the event was to show that “having cultural competency is important, and to embrace diversity and multiple identities among students.”

”I expect students to not discriminate and not to make anyone feel unwelcome,” she said.

In addition to educating students about where to report hate/bias incidents and seek support, Ford said she hopes the #NotAtTU relaunch will foster an environment in which those incidents won’t occur in the first place.

The relaunch event, which was held in the second floor of University Union, consisted of activities, giveaways and free food. Students were able participate in different stations that sparked discussion and provided information about promoting inclusion.

Students were asked to follow Towson SGA on social media to keep in contact with SGA’s initiatives.

Participants then picked a number between one and seven that corresponded with questions such as, “If you were to ever experience a hate/bias incident on campus, where would you get support from?” and “Where do we draw the line between free speech and hate speech? Is there a difference?”

Using up to five words, participants used whiteboards to write their expectations for University administrators and the Towson University Police Department.

Students responded with messages for the administration and TUPD to practice accountability, transparency, empathy, good mental health, patience and other expectations.

Participants pledged their commitment to creating and maintaining an inclusive campus by signing their name on a banner that said, “We are in full solidarity and committed to our mission against hate on campus!”

After signing the banner, participants answered discussion questions and submitted suggestions into a suggestion box on how the University can promote cultural competency.

People can find support for hate/bias incidents on campus from the Center for Student Diversity (University Union Room 313), the Health and Counseling Centers at Ward and West, Housing and Residence Life (Marshall Hall, Suite 50) and the Office of Inclusion and Institutional Equity (Administration Building, Suite 214). Additional support can be found in student groups, clubs and organizations to help students connect with people who share similar interests.

Throughout the stations, participants earned giveaways such as laptop stickers, #NotAtTU T-shirts, and food and drinks.

According to Mileo’s statement in August, the relaunch was also meant to expand the previously “primarily student driven campaign” and encourage more University members and community partners to address hate in the Towson community.

Ford said she worked closely with the Office of Inclusion and Institutional Equity to broaden the scope of the #NotAtTU campaign.

“The Office of Inclusion and Institutional Equity, which is run by Dr. Leah Cox, has also helped me a lot in gearing me up for preparing this event and giving me pointers on what she does and how she tries to incorporate institutional equity within professors and stuff like that,” Ford said. “So having her insight has also helped me rebrand #NotAtTU so it can appeal to the broader sense of Towson.”

Senior Amara Hamilton said it was a good idea to market #NotAtTU to the Towson community as a whole.

“I think it’s good, and it helps raise awareness since these are issues that occur everyday,” Daramola said. “I also think it’s good that they’re revamping NotAtTU.”

“I was reading some of the posts on the board and I think people are more willing to share and they can write it down,” Hamilton said. “So I think it’s a good idea to do it like that: to verbally say it and to write it down.”