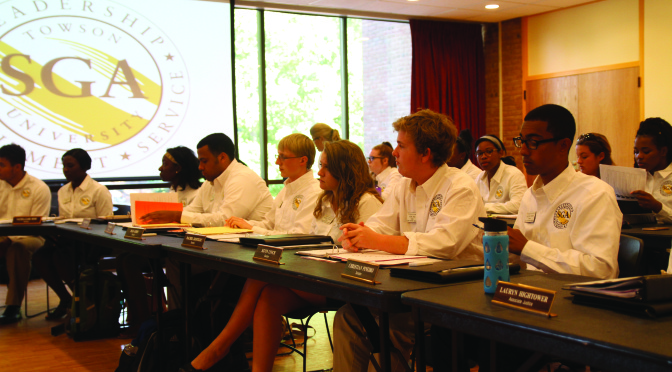 Towson’s Student Government Association unanimously voted in favor of a resolution reaffirming the body’s dedication to fighting anti-Semitism last week, amid recent threats against Jewish communities in the United States.

Resolution 41 was introduced by Sen. Jodi Teitelman and Director of Diversity Outreach Breya Johnson at the SGA’s March 7, General Assembly meeting. The resolution concerns “the need to recognize and reaffirm the fight against anti-Semitism and provide support and resources to the greater Towson University Jewish community.”

For Teitelman, the local Jewish community was a major reason she chose to attend TU. She said that she loves being Jewish, but the recent threats have made her uncomfortable.

“We need to know that we’re supported here,” Teitelman said. “We want to let you guys know what we’ve struggled with.”

As of March 10, Jewish Community Centers (JCCs) and Jewish day schools have been the targets of at least 152 bomb threats in 37 states and two Canadian provinces this year, according to the Anti-Defamation League. At least two Jewish cemeteries, located in Philadelphia and St. Louis, have also been desecrated, and bomb threats were made against the Park Heights and the Owings Mills JCCs in Baltimore County.

Towson University was the target of anti-Semitism in October 2015 when an unknown person(s) wrote anti-Semitic messages on a chalkboard in Freedom Square.

Per the resolution, the SGA and the Towson Jewish community will release a joint statement condemning anti-Semitic acts. The SGA also urges University administrators to release a statement of their own.

“I am actively concerned with moving forward and bridging the gap between all student organizations,” Johnson said.

Noam Bentov, executive director of Towson Hillel, wants Towson to be safe and inclusive for all communities and asked the Towson community to think about how they can achieve that vision.

“How do we honestly include a radical inclusive campus so we can support anybody who needs help on campus?” Bentov asked.

The SGA plans to educate future SGA administrations and the greater Towson community about anti-Semitism through the #NotAtTU initiative, according to the resolution.

“I don’t know what you have gone through, but as a Muslim-American … I empathize with you,” SGA Solicitor General Omnia Shedid said.

Teitelman welcomed Shedid’s words, saying that the threats are not just about the Jewish community, but reflect the concerns of other minority and marginalized groups as well.

“The Muslim community has been so supportive, especially in St. Louis when they raised all that money for the cemetery that was destroyed,” Teitelman said.

Muslim activists Linda Sarsour and Tarek El-Messidi started a fundraising campaign to help restore the Chesed Shel Emeth Society cemetery in St. Louis after more than 150 headstones were vandalized in February. Later that month, 100 headstones were vandalized at the Mount Carmel Jewish Cemetery in Philadelphia, and several other cemeteries have reported similar incidents.

The campaign, which reached its $20,000 goal within three hours of starting and has now raised over $160,000, plans to distribute the funds among affected cemeteries.