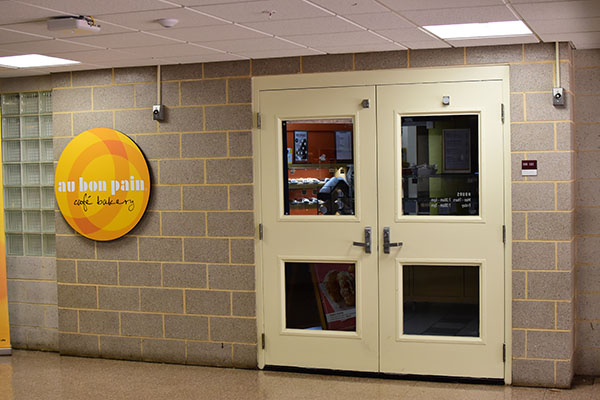 Photo by  Brendan Felch/ The Towerlight

Towson Dining Services almost made getting food on campus a difficulty for students.

Dining Services had changed the meal plan policy so that meals would no longer be accepted at dining areas like Au Bon Pain and the Administration Building along with other dining areas in some academic buildings.

SGA Director of Communications Beza Tenna said that the SGA was unsure why the changes were proposed.

“We, the SGA, strongly felt that the students opinions should be part of this powerful decision,” Tenna said.

Once students heard of the major changes to dining policies, the SGA put out a survey to make sure these outraged student voices were heard.

“Within days of the survey release over a thousand students used it to voice their concerns,” Tenna stated. “This was a shocking result since it occurred in a short period of time, especially during summer break. Which furthermore reflects how greatly it affected the TU population.”

Junior Ryan Sullivan was one of the many students upset with the meal plan policy change.

“Since freshmen and those living off campus are forced to get a meal plan, and they can’t use meals other places, they would be spending more money on top of the meal plan they already got,” he said. “Towson tried to make it so that students would spend their own money on other options besides dining halls, but the prices are so jacked up already, so no one could afford it without a meal plan.”

Some students don’t have the time to sit down and have a meal in dining halls. If meals were limited, busy students would be forced to spend points or actual money rather than the meals included in their meal plans.

“I think having the opportunity to have mainstream places is a comforting aspect to the college community because the food options were something I am familiar with,” said Kristall. “Dining halls don’t always have what I want.”

On Aug. 18, Towson SGA tweeted revealing their success in changing the policy, stating, “We got your feedback and all of your concerns! The new meal policy has been reversed. Meals will still be accepted in academic buildings!  #TrueTU.”

“After the the reveal of the new meal plan, SGA was curious to the thinking process behind the drastic change,” said Tenna. “Additionally, after seeing the multiple concerns, comments and complaints from the student body, we knew we needed answers.”

Sullivan believes that the reversal “is better for students because now they have actual options, and can eat at more places around campus, have better food, and be closer to their classes and housing.”