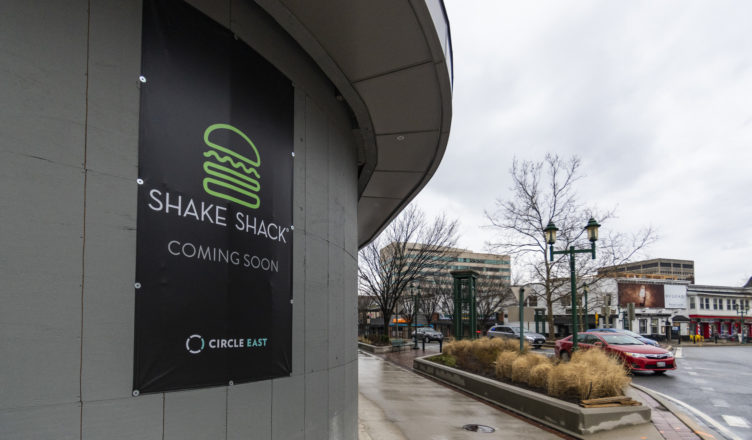 A new Towson destination for burgers, fries, and smooth milkshakes is coming to town by the end of the year with Towson’s first Shake Shack location.

The burger joint will be located uptown at the new retail center called Circle East. Circle East will be placed at intersections between Joppa and York Road.

“The side of the road used to be an old department store,” said Greg Goldberg, the leasing director for the Circle East site. “We transformed the street to be a true main street, adding landscape, lighting and benches. The vision for the project was to bring a modern version of downtown to Towson.”

According to Goldberg, Circle East expects to expand a fun atmosphere further uptown and make it a more inviting place. The new development will also include 300 apartment units above the street-level retail area as well as over 300 parking spots below the building to open up the street more.

Shake Shack was the first tenant to sign the lease at Circle East. The restaurant will merge fast food with conscious food sourcing and a sleek environment.

“College kids will definitely make it the place to be, we’ll be flooding the place” said Towson University sophomore, Ciara Franklin.

Items available to enjoy will include hot dogs, burgers, fries, ice cream and more. From burgers seared in beer, to the hot cocoa milkshake, Hambrick said guests can expect to find something unique at this new burger joint.

“You can always count on us for having something new as well as the classics,” Hambrick said.

The restaurant also has a campaign called “Stand For Something Good” in which they stand for carefully sourced premium ingredients, recycling plastics and bottles, giving back to the community, and even innovative construction. Most of Shake Shack’s buildings are constructed with recycled materials, and decorated by local artists.

Hambrick also said the company practices sustainable agriculture, and makes sure all ingredients are good quality.

“All of the meat we use is fresh, with no hormones,” Hambrick said. “We use top of the line ingredients.”

Through the “Stand For Something Good” campaign, Shake Shack recycles everything they can, including the cooking oil which is used to reproduce clean energy. In the community, they give back to local charities by donating part of their profit.

“Some items on the menu you purchase give back to non-profits,” Hambrick said.

The closest Shake Shack to Towson before this upcoming location was the one located in Baltimore’s Inner Harbor. The new addition will bring this recognized food hub to Towson’s local area.

“Oh I’m ridiculously excited for it, because the only time I have the opportunity to eat it is when I’m in DC,” said Towson University junior Britney Tetteh.

This Shake Shack is the first to debut in a Baltimore suburb. The retail area of Circle East is expected to start operations fall to winter of this year.