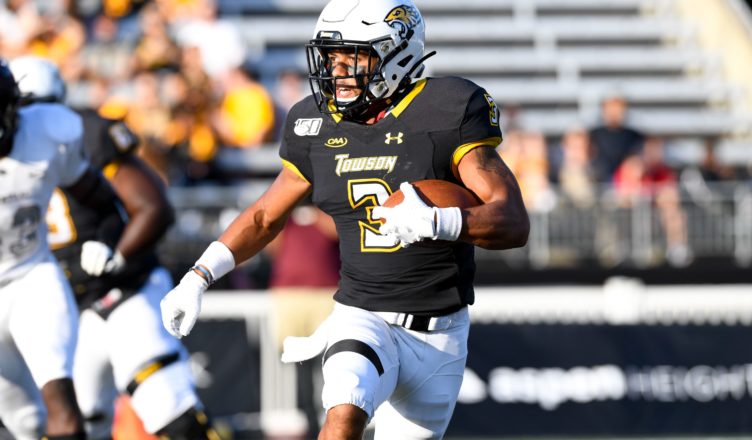 Leatherbury became the first Tiger prospect to sign with an NFL team since cornerback Tye Smith in 2015 when he also headed to the NFC West, signing with the Seattle Seahawks.

Leatherbury celebrated the news on Twitter, and a few of his teammates and coaches also reached out to congratulate him.

“Woke up an Arizona Cardinal,” Leatherbury said. “God is so good!! Time to get to work!”

“A WALKON that just wanted a opportunity,” Harper said. “It’s kids like Shane that makes coaching worth it.”

Leatherbury finished his collegiate career ranked in the top ten in receptions, receiving yards, and touchdowns in Towson history. Last season, his 12 receiving touchdowns broke a school record for a single season. Five of these scores came against Bucknell in a game the Tigers won 56-7.

Leatherbury earned two All-CAA selections at Towson, last season he led the Tigers with 52 receptions for 667 yards and 12 scores. In 2018 he finished in the top 30 in the FCS in receptions per game and receiving yards.

If Leatherbury plays in an NFL game, he will become the second Towson wide receiver to do so. The last Tigers receiver in the NFL was former Buffalo Bills wide receiver Marc Brown. He only played in three games in 1987, recording nine receptions. Towson has never had a wide receiver drafted in the NFL.

Leatherbury joins Smith, currently with the Tennessee Titans, and Pittsburgh Steelers safety Jordan Dangerfield as the only active Tigers in the NFL. A few of Leatherbury’s teammates, including quarterback Tom Flacco and running back Yeedee Thaenrat, are also pursuing NFL careers.

After playing his final game for Towson last season, Leatherbury showed his appreciation on Twitter.

“Forever grateful for this university,” Leatherbury said. “I was just a kid who wanted a shot.”