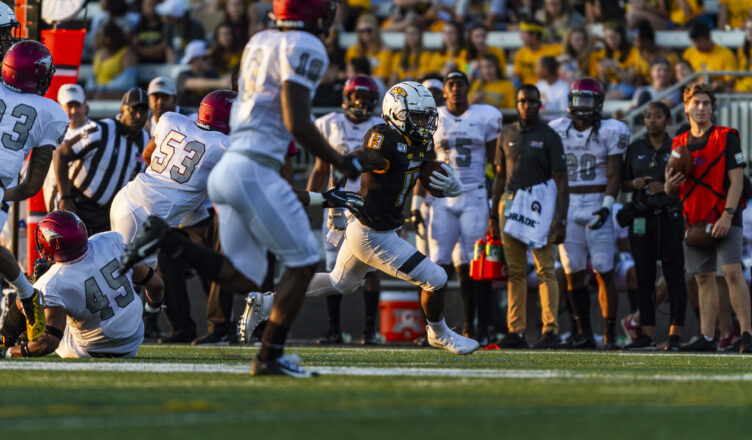 Former Towson running back Shane Simpson announced his plans to transfer to the University of Virginia on Aug. 2.

The former Tiger chose the Cavaliers over Texas, and after receiving interest from notable schools such as Florida State, Penn State, and Duke.

“Thank You Towson University for allowing me to show my talents to the nation and getting my degree from this university!” Simpson tweeted. “I will forever be grateful for my time here! Tiger for life 13 out.”

Simpson’s best season was in 2018 when he led Towson to its first FCS playoff appearance in five years. He was named an All-CAA at three different positions, while his kick return yards (887) and all-purpose yards (2,058) were both second-best in the FCS. He was named a First-Team All-American by the Associated Press and AFCA FCS coaches as an all-purpose player.

In 2016 he was named a Third-Team All-American by STATS starting in seven games and rushing for 784 yards and three touchdowns. He also recorded 913 kickoff return yards and tied a Tigers record with a 100-yard return vs New Hampshire.

Towson University President Kim Schatzel says she will continue to support every athlete who will be pursuing collegiate athletics elsewhere.

“I think that each athlete is going to make a real personal decision about what their career goals are to be able to do that,” said Schatzel. “I don’t know whether any of the athletes have made final decisions in terms of doing that, but for example as a football player which Shane [Simpson] is, to possibly want to be able to compete particularly because he had some injuries on and off in his career, I can completely understand. What we want to do is be able to be supportive of our student-athletes in terms of what they want to be able to accomplish with their collegiate careers. No one ever expected the fact that we would be sitting in a situation where our fall sports seasons would be postponed, so I could completely understand that some individuals are taking a look at what other alternatives they might have to be able to do that.”

Simpson is considered to be the next Tiger to pursue an NFL career and is currently on the Senior Bowl watch list. If selected to participate, he would get the opportunity to play in front of scouts and coaches from all 32 NFL teams.

If he is chosen, he will be the third Towson alum to participate in the Senior Bowl, the last being running back Tony Vinson in 1994.

Simpson joins a backfield with four other running backs currently on the Cavaliers roster, however, none of them have any significant college experience.