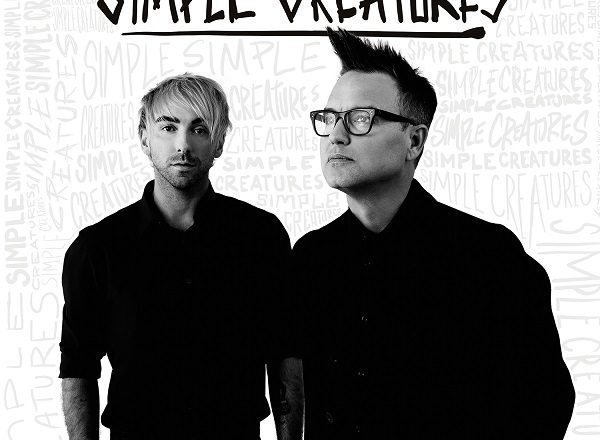 Well this is a pleasant surprise! Simple Creatures is a duo consisting of Mark Hoppus from Blink 182 and Alex Gaskarth from All Time Low. These guys were some of the best songwriters to come out of the pop punk scene of the 2000s, and they have just released their debut EP Strange Love. So, are these pop punk giants able to create beautiful music together?

Upon listening, I was surprised to hear that these songs are not pop punk by any stretch. Though there are plenty of guitars throughout, Hoppus and Gaskarth have gone for a sound that is closer to the new wave sounds of the 80s. Hoppus has made known his affinity for bands like the Cure in the past, and this band seems to give him the creative outlet to create this moodier type of music which wouldn’t necessarily fit into Blink 182’s traditional style. This shift in genre fits perfectly with Gaskarth’s writing sensibilities. The songs of All Time Low always seem to set a scene in the mind of the listener, and these songs really help enforce the emotional weight that the music promises. The song “Drug” talks about the helplessness felt when in a toxic relationship and the closer “Lucy” paints a pastiche of a girl on the run. The song “Adrenaline” also stands out as being the catchiest on the record.

I wouldn’t really say that the EP is flawless though. The synthpop aesthetic is certainly a unique sound. But the record can sound a bit same-y in places, which is a bit disconcerting considering the record is only six tracks long. These synthpop features tend to bog down some of the songs as well. The main feature that is behind most good synth music is the drum machine, but in this case the drum machine seems to be more of a synthetic convenience rather than an original musical idea. The record would have worked out much better if they had an authentic drummer behind them. I may be spoiled with the god-like drumming of Travis Barker from Blink 182, but there are many session drummers like Josh Freese who could have these songs the extra punch that they needed. Without him, the production of the songs just barely miss the mark.

This is still a record that is worth streaming a few times though. If you’re a fan of Hoppus’s or Gaskarth’s other bands, you should check this out. While it may not be as good as All Time Low or Blink 182, it will tide you over for the time being until Hoppus and Gaskarth return to their main gigs. This record is not going to set the world on fire, but it is a lot of fun and one worth picking up if you’re even mildly interested.