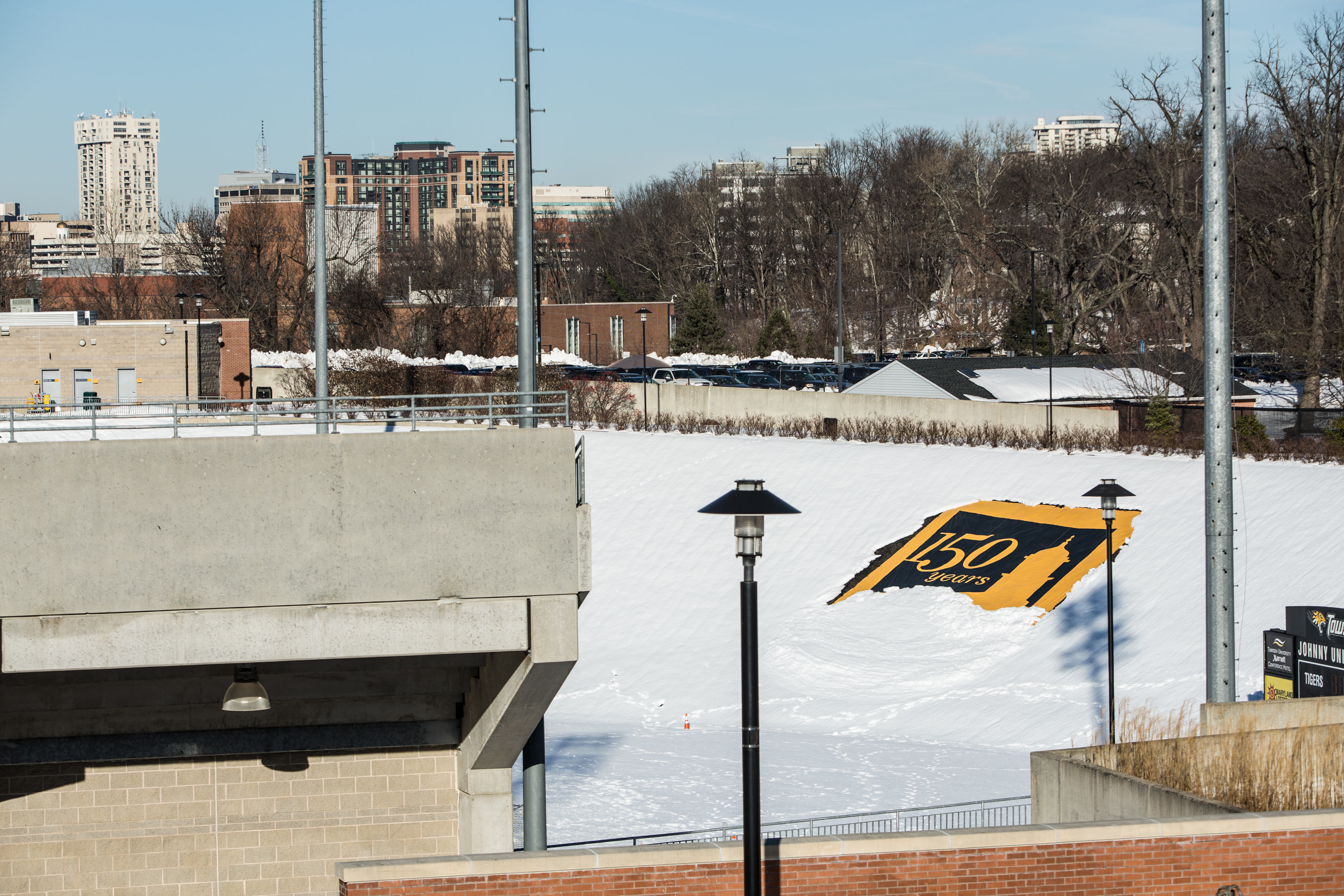 Over 60 employees, both from TU and outside contracts, worked for over 7,000 hours to move over 30 inches of snow from all around campus and to lay 40 tons of salt, 850 gallons of brine and about 20 pallets of magnesium chloride on the ground to prevent ice from forming.

According to Accuweather, Baltimore saw over 29 inches of snow from the blizzard, delaying public schools in Baltimore County and pushing move-in at Towson back from the weekend to last Wednesday.

On-campus students who weren’t living in Millennium Hall or Towson Run only had the Wednesday before classes started on Thursday to move in.

“There were just more cars, and all of the traffic coming in and out, with the snow you couldn’t move around quite as easily,” Douglass House resident Cassidy Sell said. “So, it was hard getting all the way up.”

Petersen said that a lot of the credit for getting campus cleared up should go to Bob Keenan, who’s in charge of grounds at Towson. Petersen said that Keenan was on campus from Friday-Friday, making sure the cleanup effort worked.

“He was kind of like the snow master,” Petersen said. “He did just an amazing job.”

Parking was another big concern for commuter students looking to make it back to campus for classes on Thursday. Parking on campus is, at times, so limited for students that they spill into the community rather than pay for a parking pass or drive around looking for a spot.

However, according to Director of Parking and Transportation Pam Mooney, everything but the roofs of some of the parking garages were ready to go on Thursday, when classes began.

Mooney said that she wasn’t comfortable opening the rooftop of the garages in the morning, because the conditions weren’t wholly safe just yet.

“On Thursday, we were able to open up the vast majority of the union garage roof by midday-ish,” Mooney said. “You have to get the snow off, and then they have to treat the ice layer, which in essence melts the ice.”

Mooney also pointed out that more parking was – and almost always is – available up in the parking lots near Towson Center.

Another complication for commuter students: The off-campus shuttles. Some of the shuttle routes, because of conditions of the roads and apartment complexes that they travel through, had to operate on adjusted routes.

“The problem is that a lot of the places we go into are apartment complexes, and they can be difficult for the shuttles, even on the best days,” Mooney said.

As of noon Monday, Mooney said that the only routes that weren’t back to normal were the stops near The Fairways, on the Goucher route and The Quarters, on the Kenilworth route.

“Everything else is back to normal, and we basically play it by ear,” Mooney said. “The drivers can generally get a little bit of an idea of how things are going on, and if they can’t then we send a supervisor through.”

Petersen said that, because there were around 500 students on campus—including athletes, Housing and Residence Life employees and international students—they had to treat the snow situation like it happened when campus was at full capacity.

“The first thing to do is open campus for emergency vehicles,” he said.

After that, it was clearing spaces for food delivery trucks and food preparation to get in, and then opening up the interior of campus.

“What we did this year, which we haven’t done before, is we helped the state out with York Road,” Petersen said. He said that facilities management noticed a few days after the storm that York Road “was a mess” and that it’d be difficult for students to get across.

Petersen said that he doesn’t like using sodium chloride and prefers to use magnesium chloride, “because it’s a lot safer for the interior of buildings.”

Sodium chloride has been shown to exacerbate the corrosion of bridges, steel reinforcements in concrete and even the undersides of cars. When salt runs off into water, it can harm aquatic life and end up in drinking water.

Any students, faculty or staff who find areas of campus that still need clearing are encouraged to report that information to the Work Control Line at 410-704-2481.

–Sarah Rowan contributed to this article.