The Tigers had a rough two games on the road this weekend after losing 3-1 to Drexel and drawing 1-1 to the University of Delaware.

Towson was out to a strong start on Friday against Drexel, as the Tigers opened the scoring within ten minutes.

Junior midfielder Emily Marshall took a free kick following a foul by the Dragons near their own penalty area. Marshall curled a cross into the box that hit off of a Dragon defender before going into the net for a goal.

Unfortunately the Tigers could not build off of the momentum from the goal and let in three unanswered goals to the Dragons, one in the first half and two in the second half as the Tigers pushed for a late equalizer.

Against Delaware, the Tigers had one lapse of concentration in the first half and paid dearly for it. In the only major event of the half, junior goalie Taylor Sebalao launched a ball in an attempt to clear.

The ball deflected off of a Tiger directly into the path of Delaware’s Carolyn Seltzer who then lifted the ball over Sebalao who was still off her line following the clearance.

Head Coach Gary Paynter made a drastic change at halftime and went from four in the back line to three. This enabled Towson to have more possession and ability to dribble in Delaware’s half of the field.

“The character and leadership of Kristyn Hubbard to step up during a system change to lead the back three and keep a clean sheet in the second half and overtime was great to see,” Paynter said according to towsontigers.com.

The adjustment would pay dividends for the Tigers as senior midfielder Vasthy Delgado would level the score 65 minutes into the game. After some ball movement at the edge of the Blue Hen penalty area Delgado placed a shot over Delaware keeper Kelsey O’Donnell from twenty yards out.

The Blue Hens would then put significant pressure on Towson in the second half and overtime but the Tigers hung on to secure a point.

“Delaware had control the whole first half of the game,” Paynter said according to towsontigers.com. “At halftime we made a decision to change our system and formation to move some people around. Vasthy [Delgado] moved to the midfield and that made a big difference.” 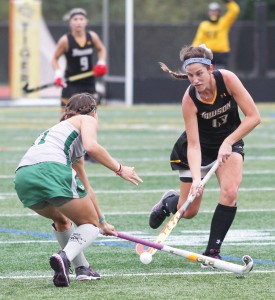