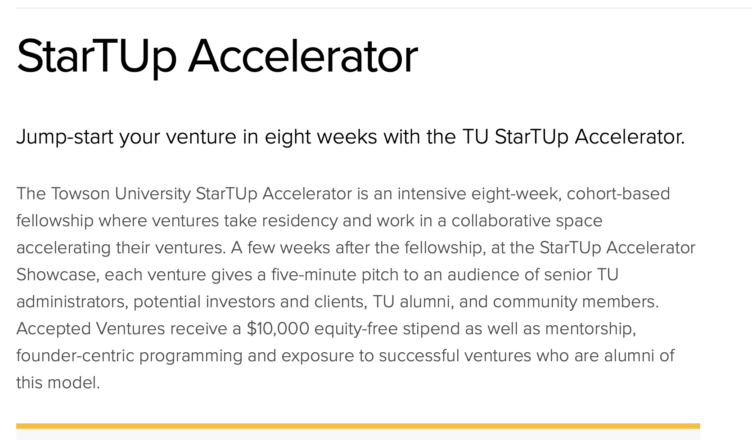 Towson University is scheduled to hold it’s first StarTUp Accelerator sponsored by the Division of Strategic Partnerships and Applied Research from June 1 to July 24, 2020. The program is an intensive eight-week, cohort-based fellowship in which start-up businesses will reside and work in a collaborative space to boost their ventures.

According to Towson’s Student Data and Analysis, there are over twice as many Business and Economics majors than Education majors at Towson.

Patrick McQuown is the Executive Director of Entrepreneurship and the frontrunner for The StarTUp Accelerator. His entrepreneurial dreams started at George Washington University in the 90s, “working on a start-up out of [his] dorm room,” said McQuown.

He had Entrepreneurship teaching stints at Yale University and Brown University. But McQuown wanted to move away from the ivy’s.

“Ivy’s don’t have the monopoly on entrepreneurship,” McQuown said. “ it’s about social mobility and it doesn’t matter what school you go to, it matters what you do.”

McQuown was the executive director of entrepreneurship at James Madison university from 2017 to 2019. McQuown said he brought his version of the StarTUp Accelerator to each of these schools and At JMU, his students were able to raise $15 million in outside ventures.

Although the chances of the Accelerato being held in June are “slim to none”, he said, students are still able to have an open line of communication with the people running it through WebEx phone calls with the students.

“The whole issue around entrepreneurship is a priority for me. We’re working to take the armory that’s in UpTown Towson and basically move,” Schatzel said. “We called it the startup and we’re moving the accelerator up there.”

Mehir Uddin, a junior at Towson, has created deep connections with Towson’s entrepreneurial professors and because of them, deeper connections with the surrounding Baltimore area. He intends on being involved with the accelerator.

“It exists so close to me and I’m already intimately involved with entrepreneurship at Towson,” Uddin said. “Resources are always great to have, especially if they are free.”

The accelerator allows four ventures from the community and two student-run and they will receive $10,000 equity-free stipends as well as mentorship, founder-centric programming  and exposure to successful ventures that have come from this model by McQuown.

Schatzel said that the University is working towards extending student programs.

“We really want to extend the opportunities for entrepreneurship across the campus for students,” she said.