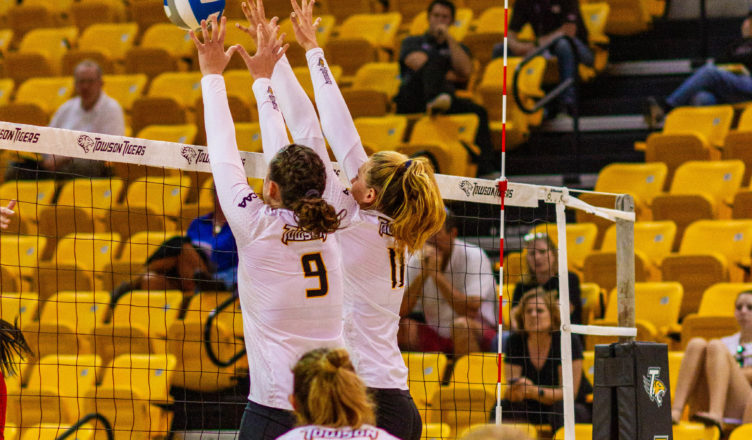 The Tigers are off to a strong start this season. Towson has won their last six games, including their first two in the CAA.

On Sunday, the Tigers defeated the James Madison Dukes 3-1.

“All members of our team are just as strong as the others and we each have a role that we have been able to execute as best we can so far,” senior outside hitter Emily Jarome said.

The beginning of the first set was rough as the Dukes (8-5, 2-1 CAA) were leading after multiple errors from Towson (12-2, 2-0 CAA). However, the Tigers quickly bounced back and took the lead scoring eight unanswered points. James Madison attempted to come back, but Towson won the first set 25-19 after multiple errors from JMU and a few kills from Jarome.

Towson bounced back  in the third set after five kills from Jarome and three combined kills from senior outside hitters Olivia Finckel and Annie Ertz.

There were two aces in this set coming from junior defensive specialist Camryn Allen and senior middle blocker Silvia Grassini. The Tigers won the third set 25-16 off a 9-3 run.

The fourth set included 11 combined errors and one ace for each team. Jarome served an ace in the beginning of the set, but she made a reception error which resulted in an ace by James Madison sophomore setter Rebecca Frye.

Towson won the fourth set as Finckel made the final kill to end the game.

“Seeing the team play at a high level early on during conference play,” head coach Don Metil said about what he liked in his team’s performance.

On Friday the Tigers won their first conference game of the season by defeating the University of Delaware Blue Hens (9-4, 1-1 CAA) 3-0.

Towson started strong in the first set after nine errors from the Blue Hens. Delaware took an early lead, but the Tigers began to increase their kills and the Blue Hens continued to make service errors. Delaware took their first timeout after losing their lead and returned with a kill by Blue Hens freshman setter Ezgi Basaranlar.

Delaware took an early 3-0 lead in the second set, but nine errors allowed the Tigers to come back. The Blue Hens came back in the middle of the set, but Towson quickly broke the 18-18 tie and won the set 25-19 on an Ertz ace.

In the third set, The Tigers scored five points in the first few minutes of the set due to two Delaware errors and two kills by Finckel. Towson never trailed in the set. The Blue Hens tried to catch up towards the end of the set, but the Tigers won the final set 25-21.

The Tigers finished the game with a total of 41 kills, led by Finckel and freshman middle blocker Lydia Wiers with nine and eight respectively. Towson had less than half as many errors as the Blue Hens.

Jarome praises her team and said, “Our defense has been strong and scrappy, our setter Marissa Wonders sets up a great offense, and each hitter on the team is of equal importance.”

The Tigers host the Northeastern Huskies Friday Oct. 4 at 7 p.m. and the Hofstra Pride on Sunday Oct. 6 at noon at SECU Arena

“These are two key road wins and now we have to defend SECU Arena in the coming week,” Metil said.