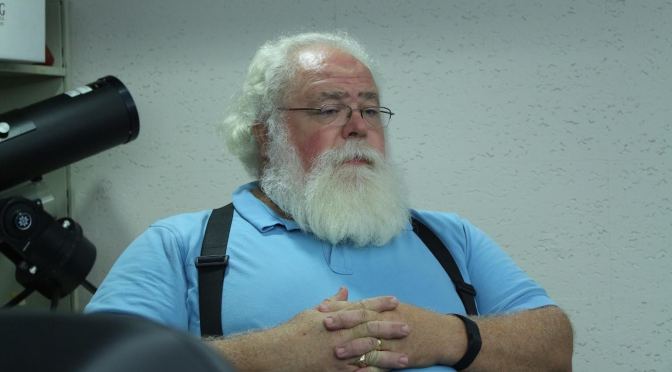 Associate professor Alex Storrs explained the scientific understanding of light and its fundamental role in studying the universe at a planetarium show in Smith Hall on March 17.

“Light is essential to our understanding of how the universe works,” Storrs said. “Without it, we wouldn’t be able to sense things beyond our arm’s reach.”
With light, people are able to observe things far out in space.

“We’ve been using light to discover all sorts of things in our solar system and beyond,” Storrs said.

He explained how we use light in advanced telescopes such as the Hubble Space Telescope, which has taken detailed pictures of several nebulae.

Storrs also showed pictures of Saturn, taken by the unmanned spacecraft Cassini during its mission over the past few years.

People are most familiar with light in the RGB spectrum, but Storrs pointed out that “there is a lot more light beyond our visible RGB, including ultraviolet and infrared.” Using these other forms of light allows people to see far more than what a normal camera could capture.

According to Storrs, one of the most important concepts in understanding light is that it is a both a wave and a particle.

“This colors our whole vision of reality,” he said.

Despite these advancements, Storrs said that most people don’t find these astronomical findings helpful for everyday life.

“What’s important and of great fascination to scientists is not the same for ordinary people,” he said. “Most people just see what they expect to see. That’s why eyewitness testimony is one of the worst forms of evidence.”

Storrs believes that astronomy is of great importance to identifying humanity’s place in the universe.

“What we get from astronomy is our place in space,” he said. “The universe is extremely vast, very empty and full of things that could kill us. This knowledge makes us value our fragile little place in space much more.”