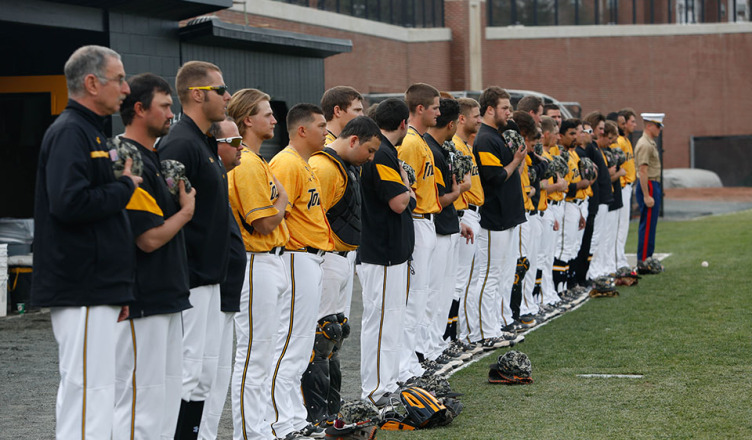 Towson dropped two out of three games at the hands of Colonial Athletic Association (CAA) rival William & Mary this weekend at John B. Schuerholz Park.

In the sixth inning, William & Mary padded its lead on a wild pitch and an RBI single to take a 5-1 lead. The team scored once in the seventh and once in the eighth to take the series from Towson and earn an 8-1 victory.

Palacios led the way at the plate for Towson. He went 3-for-3 with a double and a home run.

Junior pitcher David Marriggi fell to 4-3 on the season after allowing three runs, two of which were earned, over 5.1 innings.

In the seventh inning, Towson took its first lead of the game when Palacios tripled to right centerfield, scoring sophomore catcher Trey Martinez.

Later in the inning, Lennox singled up the middle of the diamond to drive in two more runs en route to Towson’s 7-1 victory.

Junior pitcher Michael Adams was tagged with a no-decision after allowing one run on four hits in six innings of work.

Sophomore pitcher Dean Stramara recorded his third win of the season. He allowed one hit and struck out four in three innings of work.

At the dish, Lennox went 3-for-5 with three RBIs, while Martinez and redshirt sophomore outfielder Mark Grunberg each collected two hits.

In Friday’s series opener, the Tigers fell behind the Tribe 2-0 in the first inning but responded in the third inning when Gimblet singled up the middle, plating Grunberg and Palacios to tie the game.

The Tribe took the lead in the sixth inning and continued to extend their lead throughout the game. A five-run eighth inning led the Tribe to a 12-3 victory over the Tigers.

Redshirt senior pitcher Kevin Ross suffered his fifth loss of the season as he allowed seven runs, six of which were earned, through seven innings of work.

“We didn’t hit enough Friday and Sunday,” Gottlieb said. “We allowed too many runs and couldn’t tie up and take the lead.”

Towson will play two midweek games against George Mason and Maryland before traveling to Harrisonburg, Virginia, for a three-game series against conference rival James Madison.