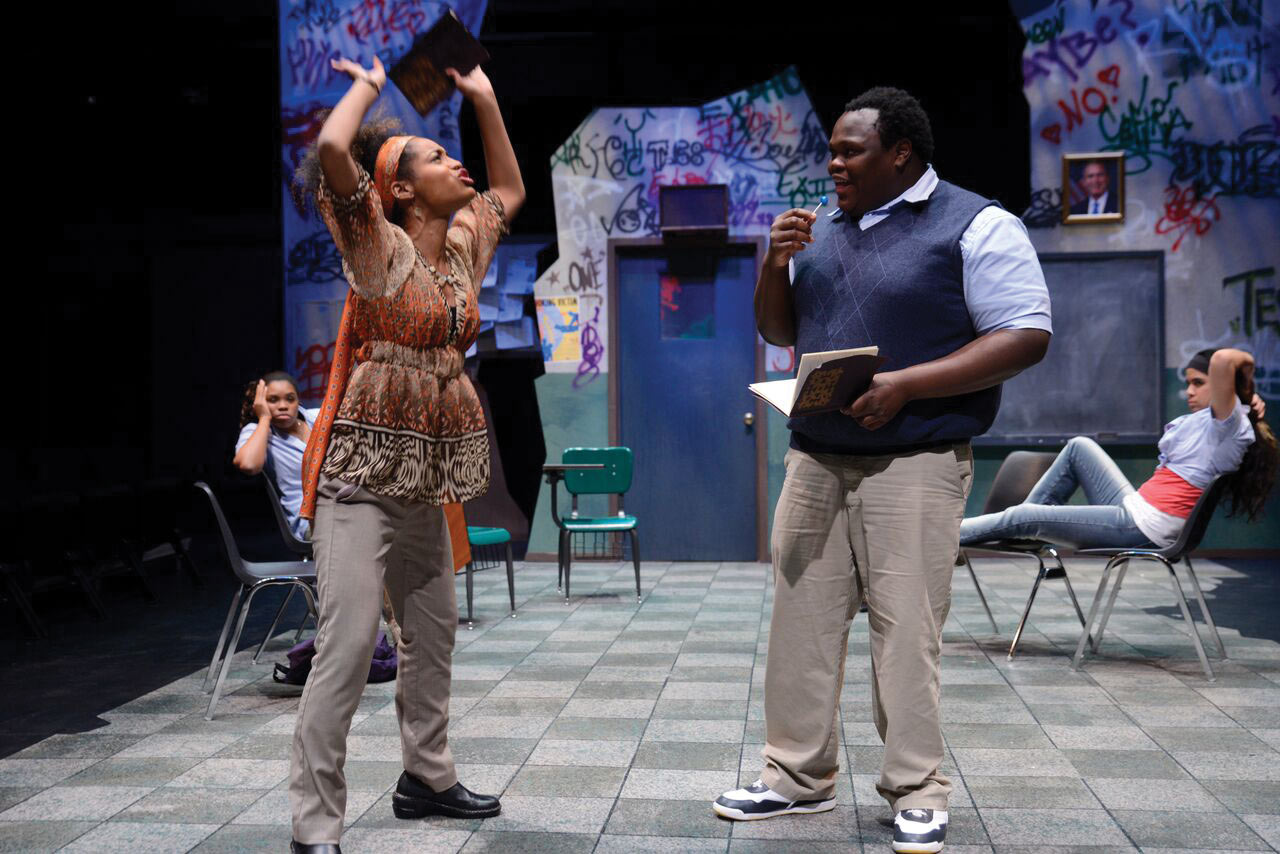 Last week, a production of “No Child…”  – a play based around the No Child Left Behind policy of the George W. Bush administration, made its way to Towson.

Professor Rosiland Cauthen, the director of play, knew of the piece before she was asked to direct it.

“I read the piece about five or six years ago and really fell in love with it,” Cauthen said. “As a teacher and artist myself, the piece really resonated with me on many levels.”

Cauthen describes the play as “about the struggles faced by students, teachers, administrators and even custodial staff in today’s urban school system. It also explores what happens when a dynamic, driven, naïve yet talented artists comes into a classroom from the outside to do a residency with a group of students.”

Students play an integral part in the performance, like senior acting major Samantha Yangilmau who plays one of the students. For Yangilmau, reflecting on her years in high school helped to shape how she played her character.

“I still understand poverty and feeling trapped in circumstances I can’t control,” Yangilmau said. “What was great was the freedom these reckless characters allowed.”

Cauthen had personal experience being a part of something that couldn’t be controlled. She was a full time public school teacher when No Child Left Behind began.

“It was really difficult,” Cauthen said. “I saw the culture of the schools swing rapidly into a testing culture. We were asked to give up arts periods and study halls and lunch breaks and planning periods to help ‘coach’ students who couldn’t pass the test.”

Finding the right actors for certain roles during the audition process was not a problem, Cauthen said, because she knew she was looking for something unique within the actors.

“I love when someone does something unexpected or out of the box,” Cauthen said. “I was also looking for similarity of energy between the actor and each character.”

After the auditions last spring semester, rehearsals began in October and lasted about a month and a half.

“From the beginning, we were encouraged to make dynamic decisions about our characters and blocking,” Yangilmau said. “We had in-depth discussions with her [Cauthen] and our great stage management team about the issues in our play that affect our daily lives and the world around us.”

In rehearsals, one of the things Cauthen had to do was transform the play from its original one-woman staging, to an ensemble staging.

“Everyone really pulled together and worked so hard, from the actors to the tech team to the lighting and sound designers,” Cauthen said. “Many of the designers are students, and it has been so cool to come to my alma mater and have this experience.”

Cauthen also said that the play relates to other Towson students outside the show, due to the University’s long history as a teacher’s college.

“We still have a strong education major and college wide emphasis on teaching and learning,” Cauthen said. “So, I think it’s perfect for teachers and students to witness this play that highlights the ups and downs of our education system.”

In the end, Yangilmau wants audiences to take away something valuable from the play.

“We are finally at an age where we get to vote and have a say in law-making,” Yangilmau said. “I want people to look at this play, learn something new, and use the power they have to make a change.”