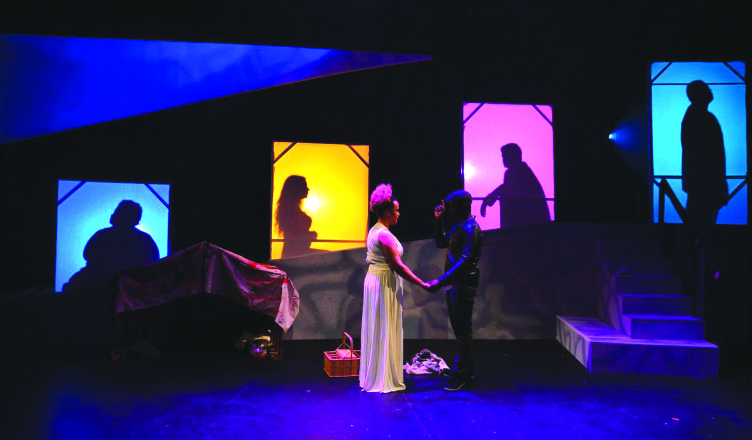 Although Nathaniel Hawthorne’s “The Scarlet Letter” is a late-nineteenth century account of shame, sin and rampant misogyny in the 1600s, it might not come as a surprise (to women, anyway) that its themes are still prevalent today.

Instead of a puritanical Massachusetts colony, imagine the vacant streets under an overpass in New York City.

Replace the stoic, isolated Hester Prynne and her unruly daughter Pearl with a long-suffering black mother (named “Hester, La Negrita”) living in abject poverty, going hungry for days so she can feed her five children.

Directed by senior acting major Mani Yangilmau, “In The Blood” is a 1999 play by Suzan-Lori Parks that ran from Thursday to Saturday in the Center For the Arts. The show offers (with increasing political relevance) critical commentary about the cycle of poverty, particularly as experienced by black women in an institutionally racist country. Misogynoir, a term coined by black feminist Moya Bailey, refers to the intersection of racial and gender prejudice that black women face.

This is the first two act show that Yangilmau has directed. Being her favorite show, she’s wanted to direct it since reading it during her first semester at Towson.

“[I] became enraptured by Suzan-Lori Parks’ highly poetic and violent portrait of the world,” Yangilmau said in an email. “Hester is a black woman and her experiences should be acknowledged as such, which is an incredibly important story that isn’t emphasized in American theatre enough.”

Written in the same structure as a Greek tragedy, Hester, portrayed with a haunting and stunning performance by Sydney Pope, struggles to make ends meet as she raises her fatherless children.

The family is homeless, living in an alley under an overpass. The cast of six play 11 characters, with the actors who play Hester’s children also taking on the roles of the various people who offer to “help” Hester — Reverend D., the preacher who fathered Hester’s youngest son Baby (both played by Willem Rogers); Amiga Gringa, Hester’s prostitute and drug-addicted friend (Melissa Spangler, who also plays Hester’s daughter Beauty); The Doctor, an erratic, seemingly homeless practicing physician (Tyrel Brown, who also plays Trouble); the downright evil Welfare Lady (played compellingly by Natalie Dent, who plays the young Bully) and Chilli, the father of Hester’s eldest and favorite son, Jabber (both played by Isaiah Harvey).

The actors proved their skill as Hester’s children, seeming to regress in age in their performances. Dent in particular shows her range as she goes from the silly, antagonizing sister Bully, to the cruel, hateable Welfare Lady.

Only having about five weeks of rehearsal time, Yangilmau worked with the cast to prepare them for the emotional strain of their roles, and the play’s subject matter.

“There was a lot of intense script analysis paired with physically taxing movement rehearsals,” Yangilmau said.  “Most of what I did was try to coax them out of their comfort zones – stretching their physical and mental boundaries to realize that they had the skills and talent to access these incredibly tough characters in safe ways.”

“Everyone handled really difficult material very well,” freshman acting major Alyssa Bell said. “It was really gorgeously staged. There are so many moments that just looked so good, I wanted to live in them longer.”

Sound designer Tim Neil created rhythmic intensity alongside the colorful lighting design (at its peak when it backlit ominous silhouettes) by Thomas Gardner.

Although they seem to have an interest in helping Hester, supporting characters deliver monologues revealing how they all used her for their own gratification (sexual or otherwise). Amiga Gringa sells Hester’s belongings and spends the money on drugs. The Doctor disturbingly insists that he sterilize Hester. Chilli proposes to Hester before immediately abandoning her upon realizing she has more than one child. The Welfare Lady verbally and emotionally abuses Hester. The Reverend promises to financially support Hester, only to take advantage of her sexually and then refuse to give her money on the basis that she’s a “slut.”

It’d be overly-simplified to describe “In The Blood” as an adaptation of “The Scarlet Letter.” Yes, the protagonists share a name, and the shows are thematically similar (including the “A” motif, as Hester La Negrita, who is illiterate, practices writing it over and over again). Beyond that, Parks sought (through much of her writing) “to locate the ancestral burial ground” of unrecorded black history, and to “dig for bones, find bones, hear the bones sing, write it down” (as described by herself in her essay “Possession”).

“In The Blood” makes visible some of the most scorned members of American society — single, impoverished black mothers. Filled with moments of brutal insight, often through Hester’s own reflections on her life and the world around her, the show doesn’t do much to spare the audience — or the characters — from the cold, dark reality of Hester’s situation.

“There are also a lot of intersectional issues [in the show] that many people experience across races,” Yangilmau said. “Religious oppression, governmental corruption, partriarchal violence, the failure of the healthcare system, and the downfalls of capitalism were all things [Parks talked] about in the early 90’s, but are still scarily relevant today with our current presidency.”

At the end of the show, Hester’s increasingly tenuous hold on her sanity snaps. Rejected by the Reverend who deemed her a “slut,” Hester returns to her children without hope. Jabber repeatedly yells that word (which he learned from graffiti written over Hester’s home) at his mother, as children are wont to do with bad words. Hester screams, beating him to death as blood rains down onto his body from the ceiling. Her children scatter during the violence, leaving Hester to stare in horror at what she’s done. She paints an “A” on her face in Jabber’s blood as masked actors, representing society, yell judgements about how she deserved the misfortune she brought upon herself.

“I’ve read the play before so I knew what was going to happen at the end, but it still took my breath away,” junior theatre studies major Divinia Shorter said. “It was really intense to watch.”

Yangilmau connects the play with the current political climate.

“I hope that this play makes people uncomfortable. Now more than ever should we be critical of our society and focus on coming together instead of dividing ourselves,” she said. “We are coming up on terrifying times with violence against “others” being justified. If there is anything we can do to prevent more pain and suffering on this Earth, we should be willing to sacrifice all.”