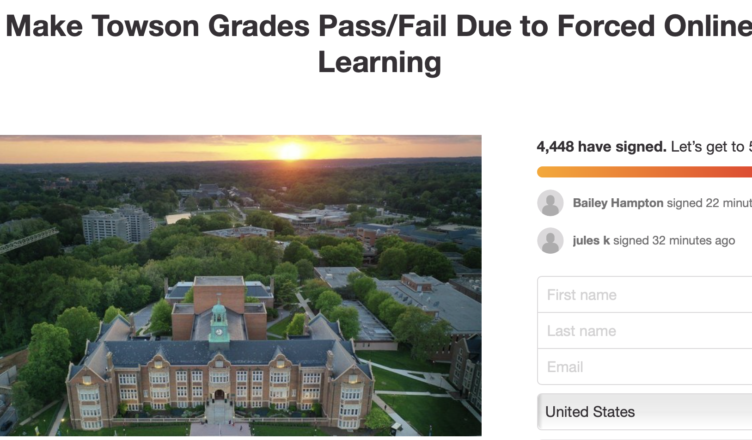 Screenshot by Tim Klapac/ The Towerlight

Towson University is now allowing students to opt-in to a broadened Pass Grading Option in response to the distance-learning transition taking place the rest of the semester.

The change was announced Friday afternoon in a campus-wide email from the Office of the Provost.

“The Provost, in consultation with the Executive Committee of the Academic Senate, SGA leadership, the Academic Standards committee, and the Provost’s Council has determined that the undergraduate Pass Grading Option will be modified for the spring 2020 semester only,” the statement reads. “This policy applies to undergraduates only. All students retain the right to be graded under the traditional letter grading policy,and faculty will continue to submit letter grades for all students.

Students will have the ability to switch some or all of their courses to the Pass Grading Option up until the last day of classes, May 12.

The email also outlines special exceptions to the typical Pass Grading Option which will be implemented for the Spring 2020 term:

“I think the pass/fail option gives students a sense of choice that we all needed in this crazy time where all of our choices were taken away because of the circumstances,” said junior Alexsandra Tamayo. “I definitely think it’ll help students achieve their best during this semester because it let’s us adapt to online learning without us being hurt by it.”

This announcement comes after a student-led petition, which amassed over 4,400 signatures, asking for Towson University to shift to a pass/fail grading system for the remainder of the semester.

The petition was started last week by TU student Saunders Healey. The purpose of the petition was “To make grading on a more even playing field and give no advantage to students who prefer online learning, or have better resources to succeed, all classes should be graded on a pass/fail basis,” according to the petition’s description on Change.org.

“We didn’t choose online classes for a reason,” commented TU student Elysia Cooper on the petition web page. “I don’t perform as well in online courses as I do when in a real classroom environment and I know I am not alone in this. Plus, I am taking care of my seven year old sister since her school is also closed. My situation is not unique.”

Since the petition launched, the University of Maryland shifted all courses to a pass/fail grading system in response to its transition to distance-learning.

This announcement was made Thursday in a campus-wide email sent by University of Maryland Provost Mary Ann Rankin.

In this grading system, students will receive either a “pass” or “fail” upon completion of a course in place of a letter grade. According to the Diamondback, Rankin clarified in her email “a ‘pass’ will not contribute to a student’s grade-point average or count toward GPA-based honors or recognitions. There also is no limit to the number of pass-fail credits a student can choose to take this semester, and minimum grading requirements for major and concentration courses will also be waived.”

This grading shift comes in alignment with distance-learning to prevent damage to student GPAs as they may not have access to materials or quiet learning spaces. UMD students also have the ability to “opt-out” of pass/fail grading to relieve a letter grade instead.

COVID-19 Student Task Force, is an independent student task force at UMD with over 262 members speaking out on the impact of COVID-19 on the institution.

University of Maryland junior Alysa Conway, the head organizer of UMD’s COVID-19 Student Task Force, disagrees with the University’s shift to the option of pass/fail or a letter grade.

“There are students that are focused on their grades and the inclination as to what their grades will do in pushing them into future success whether it’s going to grad school, medical school, or getting a job,” she said. “We also are inclined to be focused on our health and wellbeing. That is relevant to not only ourselves but to our families and other loved ones. Students shouldn’t feel like they have to choose between either option. Given that students would want to be able to reach their maximum potential given the other circumstances that they have to deal with.”

According to Conway, this system does not allow for equity towards all students.

“I think that is something that we are really missing the mark on,” she said. “By wanting to impose this on being the best solution for students. Because it just assumes that a lot of the students are going to be able to pull on the bootlegging idiom of picking themselves up by the bootstraps when some students don’t have bootstraps to pull, they don’t even have a boot.”

The COVID-19 Student Task Force at UMD is recommending a “Double A” grading system. This system would grant students either an A or A- for the course, along with an explanation of the pandemic situation for prospective employers that request transcripts.

The pass/fail grading system is said to not interfere with student financial aid eligibility.More details about how Towson University students can select the Pass Grading Option will be posted on the Office of Registrar website in the next few days.