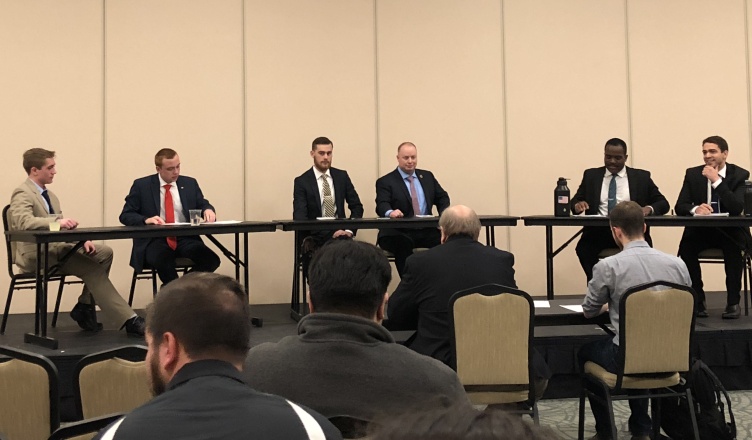 Club presidents Ryan Kirby, Matthew Schwartzman and Ethan Meyers — who are the presidents of TU’s College Democrats, Republicans and Libertarians, respectively — participated in the debates, along with members of each of their clubs.

For the first section, the participants debated questions related to the drug policy.

“Every individual has the opportunity to choose what is best for them, but the safety of others is important,” Libertarian Michael Carney said. “By criminalizing drugs, the only people we hurt are those in trouble already.”

Schwartzman said marijuana should be reclassified from a Schedule 1 drug to a Schedule 3 drug. This would mean marijuana would remain illegal for recreational use but would become legal for medicinal use.

Democrat Jonathan Townes argued that the government should move away from punishing drug abusers, and instead move toward providing rehabilitation services.

“The War on Drugs is a failure of government policy,” Democrat Jonathan Townes said. “We need to change the focus from criminal charges to mental health issues.”

Townes called out the Republican party for backtracking on the War on Drugs, referring to President Donald Trump’s current efforts to push harder to criminalize drug abusers.

Carney and the Libertarians said the government should not be alienating people who are addicted to drugs.

Townes agreed, reiterating that more focus should be given to mental health issues.

The Republicans agreed as well, but Schwartzman continued to push for reclassification of marijuana.

“We need to keep marijuana illegal for recreational use to have a safer society,” he said. “If dispensaries continue, businesses will push pot to kids like they do with alcohol and caffeine or like they did with cigarettes.”

Following a short intermission, the groups retook the stage and tackled taxes. The Democrats spoke first, addressing the flow of tax money into military spending as opposed to foreign aid.

“Too much money is going into the military and not enough is going toward foreign aid,”  Kirby said. “Foreign aid programs help those in need and help the US build positive relationships abroad.”

The Republicans rebutted, saying the United States’ military is the nation’s greatest foreign aid. Yet Libertarian Nate DeGuzman said the U.S. military has overstepped its boundaries.

“We use our military power irresponsibly,” DeGuzman said. “World War II was the last time we properly declared war, yet we’ve been in wars ever since and we shouldn’t be.”

“We need aid here before we help others overseas,” DeGuzman said. “Detroit and Flint are good examples. Let’s fix ourselves first.”

After the moderators gathered questions about guns that audience members had submitted electronically, the debaters tackled gun issues in America.

“One of the worst things is the death of children,” Kirby said. “Our country is in love with guns. There are more guns than people.”

The Republicans advocated for arming teachers.

“Teachers who want to, and feel comfortable carrying a weapon, should be allowed to,” Republican Emma Middleton said. “If a shooter walks into a room knowing it is a gun-free zone, the students are all sitting ducks. Allow the teachers the ability to protect the students.”

Kirby said arming teachers is “ludicrous” and said parents feel less safe knowing their child’s teacher has a weapon on them.

Middleton said teachers may not have to shoot their weapons but being allowed the option to carry a gun provides comfort.

The Democrats said more guns do not equate to more protection, but the Libertarians argued that gun circulation was not the issue.

“The Democrats say life is precious, so why can’t you protect yourself?” DeGuzman asked. “No matter what laws are in place, people are still going to kill.”

The Republicans said criminals will obtain guns regardless of what laws are in place, and that law-abiding citizens should have the same access to guns to protect themselves.

“Criminals will still acquire guns,” Middleton said. “They are more successful when the victim is unarmed. If we take gun ownership rights away, you’re giving criminals a monopoly on guns.”

DeGuzman said guns act as a deterrent, but Kirby said guns only escalate the situation.

“Shootings are caused because of personal vendettas,” Kirby said. “The people who cause these mass shootings have a reason and that reason has nothing to do with gun-free zones.”

Kirby suggested a voluntary buyback program for weapons and Schwartzman called the idea “absurd.” DeGuzman said gun regulations would create more criminals out of everyday citizens who had obtained their guns legally.

“Giving more power to the government makes no sense,” DeGuzman said. “The failure of the police and government regarding Parkland shows this.”

The Republicans agreed with the Libertarians about equal access, calling guns a “force equalizer.”

The debate concluded with the parties shaking hands and thanking the audience and the moderators as well as the Office of Civic Engagement for hosting the event.