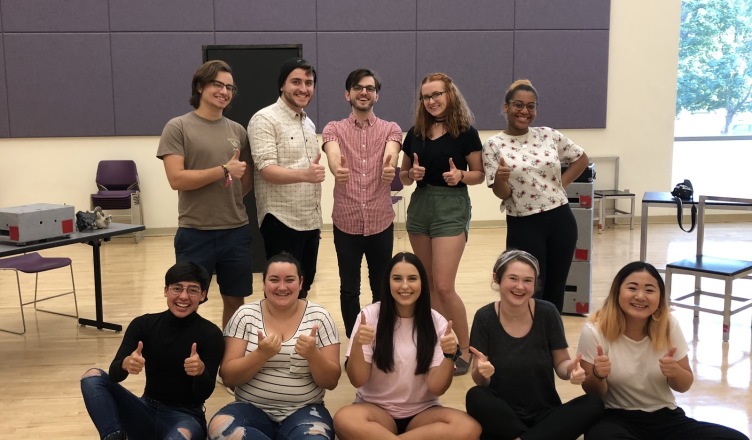 A group of Towson students are taking it upon themselves to create a student-produced, written, and directed play. And they are even getting the science department in on the action.

The play, entitled “The Voyager,” is a coming-of-age story about family and relationships.

Voyager 1 and Voyager 2 were two American space probes which launched in 1977, and are represented in the play as a metaphorical child. Sophomore Kerinne Walls plays the role of the Voyager, while her character’s parents are the scientists who created her.

“To me, it’s a play about our relationships with our parents and how that changes over time,” director Alexander Wynd said. “But it just so happens that in this play the child is a spacecraft and the parents are NASA scientists.”

Senior theatre major Jacob Zeranko, who wrote “The Voyager,” said the play is about a child whose view of life develops throughout the play.

“It’s mostly about a kid growing up and having this imaginative view of everything,” Zeranko said. “About how Voyager can see things for a little more than what they are. And as adults, as we grow up, I think we kind of lose that, but I want to show you don’t have to… I want people to be reminded that thinking about things like a kid isn’t a bad thing.”

Zeranko said he has always been interested in science and was inspired to write the play after seeing the documentary “The Farthest,” which is about the twin Voyager space probes.

Zeranko said another thing that inspired the family-relationship aspect of the play is him being a first-generation college student, and compared that to the Voyager being the first thing to leave and go into space.

Zeranko said he didn’t originally intend to make the play so personal, but he said that “Voyager has a lot of aspects about how I always felt growing up. The characters Frankie and Linda, which are the two primary parental figures are less based off of my own parents, but they are the parents I hope I can be.”

Zeranko also explained some parallels between his own family and the characters in the play.

“The character Bill is almost written after my grandfather almost to a T, which was kind of my father-figure growing up. And the character Christy is based a lot around my mom. She worked really hard so I didn’t have to worry. Her life pretty much when I was a kid was making sure that I could grow and be open-minded and do what I wanted to do.”

This is the first time Zeranko wrote a play that is being produced as well as the first time Wynd is directing a production that is going to be in a theatre. They are both excited to see the cast on stage opening night.

“All of the people in the production that are going to be on the stage I think are people who haven’t always gotten a chance to show how talented they are,” Wynd said. “And I’m really excited that I got my hands on a project where they fit into each role so perfectly that they can show what they’ve got on stage.”

Zeranko is collaborating with the physics department for a choreography aspect of the play.

Physics professor Svetlana Gladycheva, who has a background in dance, is helping teach the cast how to move like they are actually affected by gravitational forces, like they would if they were actually in space.

“The very opening scene we have is all movement, no dialogue,” Zeranko said. “But it’s all about how we’re watching Voyager navigate through the planets and getting that idea of this is where we are… and taking that into the show, how does each character’s gravitational pull affect this child? And she’s going to help us choreograph that and get that language to you so we can show people even more how the science works.”

Zeranko said Physics Professor Alex Storrs also helped with the play by looking over the script’s accuracy of the science aspects of the play since Storrs is a planetary physicist.

“He knows a lot about the Voyager stuff,” Zeranko said. “He was alive during it, he followed it.”

“It is stressful, but the reward of doing it is doing it,” Wynd said. “This is what I want to do and to be able to get the experience of doing it and working on a show that I really believe in, that one of my best friends wrote and that I’d probably still really want to do even if he didn’t write.”

Wynd talked about the challenges and triumphs that have arose working with his best friend.

“It’s this creative confluence of passion, that’s been really great and energizing, but of course, any time you have two different people who are creating a piece of art, there are some things where we have to reconcile different ideas,” Wynd said. “And I think that’s made the show stronger because we take two different ideas and make a third better idea out of it.”

Wynd also discussed that as a student-produced play, there are some challenges that come with being the boss of his peers.

“I think it’s been challenging to work with a bunch of people who are really my peers, who I’ve worked with on a level and then suddenly be their boss and to have to get them to work for me” Wynd said. “That’s been a challenge for me, but I think it’s working out so far. Everyone’s been very respectful of my new power and I’m trying not to go mad with it yet.”

While there are scientific elements to the play, Zeranko said no background knowledge about The Voyager is needed to enjoy the play.

Wynd thinks the play will be enjoyable for those who are excited about the play’s science aspect, but will be relatable for everyone too.

“If you’re excited about the ‘scienc-y’ part, please come see the play, like that’s there,” Wynd said. “But if you’re like me, who’s like a total lamen and like I don’t understand the science at all, I think the play is really much more about people. So, I don’t think it’s something that anyone is going to have any trouble relating to.”

Junior environmental studies major Anita Rezvani says that even though seeing plays isn’t usually her thing, she would consider it because the play has some science aspects to it.

“Personally, I’ve never seen a student-ran play,” Rezvani said. “I’m not into plays… but I am a science major so it does sound interesting… so I would consider it.”

Wynd says he’s been involved in theatre since middle school and likes the unexpected nature of it.

“The Voyager” will be running from Oct. 3 through Oct. 6 at 7:30 p.m. in Towson’s Ruth Marder Studio Theatre in the Center for the Arts building, room 3044. Tickets are $5 for everyone, and proceeds will benefit the Towson Foundation, which Zeranko said helps the art department be able to fund more programs.