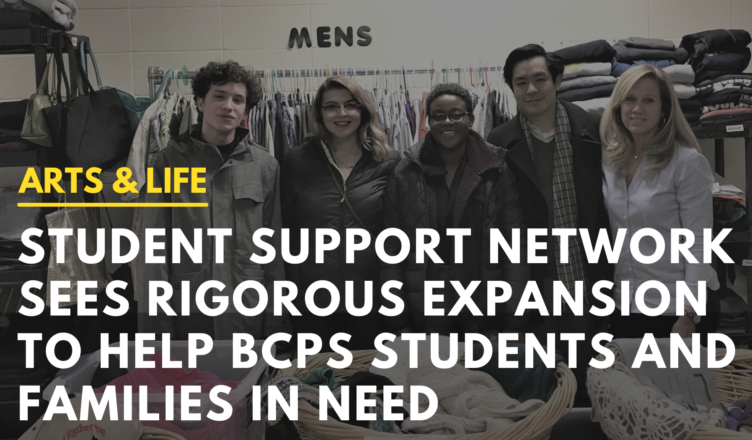 The program began in December 2015 when Laurie Taylor-Mitchell, SSN president, said she saw a great need to help students at Loch Raven High School during the holiday season. She then sent out a message on Nextdoor, a social media app for neighborhoods, asking for four volunteers to help five students and their families. According to Taylor-Mitchell, that message yielded a total of 128 volunteers who were able to donate and help 25 families over the course of a little under a month.

The SSN website explains that what started out as the Loch Raven Network has turned into the SSN, since the program extended from one school in BCPS to 12.

Taylor-Mitchell said that to keep up with the increased demand of people in need of food and supplies, Baltimore County has contributed over $2 million to the SSN since March 2020, which accounts for 49% of total donations since the pandemic began.

“A child who has benefitted from their volunteer efforts might be more focused on learning rather than thinking about where a next meal will come from or how personal care needs are to be met,” said a spokesperson for BCPS. “At the end of the day, the partnership is about a collective community that encourages and promotes physical, social, and emotional wellness towards academic success.”

According to the SSN website, in BCPS, the percentage of students that are living in severe poverty is above 50% in 86 schools, while 39 schools have between 30-49%.

“I think it’s really important for people to understand that for many of these families, there’s no good normal to return to for families living in severe poverty,” Taylor-Mitchell said.

The organization’s website said that the network has distributed more than $3.7 million in food and essential items since the beginning of the pandemic. They have also received close to 9,500 volunteer hours.

“I’m so proud of our volunteer group and our generous donors,” Taylor-Mitchell said. “It’s just been a remarkable effort of people across the county.”

According to Beth Wolff, one of the lead volunteers for Loch Raven High School, she started volunteering by stocking the shelves in The Haven, which is the room inside Loch Raven High School that houses the SSN supplies, but has been unable to do that since the pandemic began. She looks forward to getting back into the building once they are allowed and plans to continue her work with the organization after her child graduates

“We look forward to getting back into school, but we’re not allowed back yet so we can’t actually set up the room where we had before,” said Wolff, who has been with the program for over two and a half years.

Wolff said the slight mix-up of words has stuck with her and serves as a reminder of how important it is to keep up the work of the SSN, and to continue their mission of helping families in need.

According to Wolff, the network has had to transition to a drive-up system since the COVID-19 pandemic began. Usually, each participating school has a room inside their school that is designated for food distribution. Taylor-Mitchell said that now, the network has three sites open on Wednesdays where people can pick up food and other products in Parkville High School, Owings Mills High School and the Loch Raven Technical Academy.

The organization expanded to Stemmers Run Middle School in January of 2021 and plans to expand to Mars Estates Elementary School in late spring or early summer of this year.

Taylor-Mitchell said that as of right now, the County is committed to donating resources until June 30, in the form of about $85,000 per week, but after that they’re unsure what will happen between the two sides. She hopes that the partnership continues, citing the massive need to get help for students and families during this challenging time.