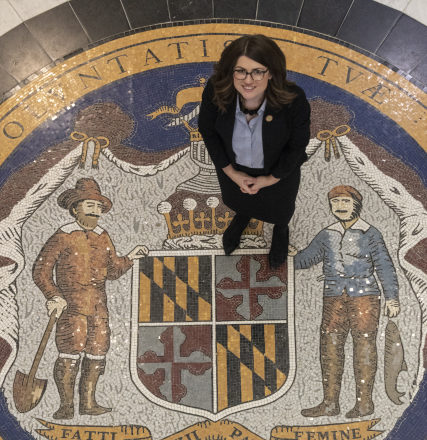 Sarah Elfreth paces around her Crowne Plaza hotel room, with friends and family in attendance for her Election Day watch party in Annapolis to see the results of the 2018 Maryland State Senate District 30 race.

Her campaign team pools results from polling places into a Google Sheet, so the voter count comes in live. The final results are in, but Elfreth stares at the screen in hope that there are more numbers to enter.

“I actually ended up losing on Election Day,” Elfreth said. “It was pretty stressful watching the numbers come in.”

Elfreth suffered her first major political defeat. Or so she thought.

Due to some precincts opening late and running out of ballots, there was a two hour delay in the early voting results.

With the official final count in, Elfreth won the race, becoming the youngest woman to serve in Maryland state Senate history at just 30 years old.

“It didn’t hit me for a long time,” Elfreth said. “The pure adrenaline in your body after a campaign doesn’t really wear off until two weeks after Election Day. I couldn’t even sleep the night of Election Day.”

Elfreth didn’t even kick off her campaign until July of 2017, fighting an uphill battle to compete in one of the most expensive races in the state. She was on the campaign trail for just under 500 days, knocking on nearly 12,000 doors to raise money and build a group of volunteers.

But Elfreth’s mission to put her name on the political map didn’t come without some criticism.

“Some of the Republicans said ‘Democrats have to be kidding themselves. They’re running a 28-year-old girl’” Elfreth said. “I thrive with that criticism. The kind of grit you have to find within yourself to push through that and the discipline to not respond makes me a better senator today.”

Elfreth taught herself to remain poised through adversity at an early stage in her life.

She entered Towson University in 2006 to earn a bachelor’s degree in political science. She joined the Student Government Association (SGA) in her freshman year, jumpstarting her involvement in politics.

Elfreth earned a position as SGA senator early on before transitioning to director of legislative affairs. This opened her up to one of her earliest negative experiences in politics, but she turned it into a positive.

“At the time, there was a senator in the committee who is now in Congress…who accused me of voter fraud,” Elfreth said. “He attempted to scare me, but it had the opposite effect. I enjoyed the fact that anyone can come down and testify and participate in making their community a better place. I fell in love with that idea.”

Elfreth got her first taste in policy-making in 2009 when former Maryland Governor Martin O’Malley appointed her as the student regent for the University System of Maryland.

She was essentially a liaison for student government/organization leaders, expressing the needs of students to the board while sharing with students what the board was doing to address those needs.

Elfreth’s top priority was to solve “the pornography issue.”

The same senator who accused her of voter fraud directed the university system to come up with a free speech policy regarding the screening of pornographic films on college campuses.

After working with student government leaders from across the state, Elfreth helped convince the board that there was no way to create a policy on pornographic screenings without infringing on free speech.

“We came to the conclusion that there really was no policy that would not violate the first amendment,” Elfreth said. “We couldn’t, in good faith, create such a policy.”

Elfreth’s passion for politics resonated in the classroom as well.

Professor Alison McCartney said that she always believed that Elfreth would be success in politics. This was especially evident in spring of 2009 when Elfreth served as a bureau chief for McCartney’s ICONS course.

Elfreth had to work with a wide range of students, a role in which she thrived.

“She was able to handle it with ease,” McCartney said. “Sarah always got along with everybody. She knew how to work with a wide variety of students. Sarah is the all around woman for the 21st century.”

While in graduate school, she also worked in the school’s graduate affairs office and interned for Congressman Steny Hoyer for two years.

Hoyer repaid Elfreth for her hard work, campaigning for her during her run for senator.

Elfreth hopes to pay her work forward as she is working on a scholarship for Towson University that will help offset the costs of students looking to get an unpaid internship.

“I started my career in an unpaid internship and really struggled to be able to afford everything, so we want to make sure that women who want to get through college don’t suffer through that,” Elfreth said.

He said Elfreth’s victorious campaign and willingness to give back are signs of what’s to come in politics.

“It’s renewed my hope in a system that seems very trouble,” Assadi said. “Sarah’s election speaks profoundly to what the future of politics should and will be; a young, capable, intellectual woman that is not afraid to advocate and fight for the challenging issues.”

Following graduation from Johns Hopkins, Elfreth joined the National Aquarium as the government affairs director. Working within an environment where sea life was prevalent opened Elfreth’s eyes to the significance of the sea life economy and how it affects state residents.

Thanks to Elfreth’s efforts, Maryland became the first state on the east coast to ban the sale and distribution of shark fins. Elfreth didn’t succeed in everything that she wanted, though.

She lobbied for a bill that would crack down on fraud (mislabeling seafood), but failed. Instead of dwelling on it, Elfreth picked herself back up.

“There’s a joke in Annapolis that it takes one year to pass a bad bill and a couple years to pass a good bill,” Elfreth said. “It’s not necessarily a bad thing. It can be frustrating, but you can’t be discouraged by it. You have to keep trying.”

Elfreth’s perseverance helped her secure her spot as a state senator.

She looks to learn the ins and outs of the $44 billion behemoth that is the state budget, while getting as many bills passed as possible.

Elfreth said will have to use different skills as a senator than she employed as a candidate, but her drive to connect with community members will not change.

“The key to campaigning is taking what’s important in the district, which are all of those issues, talking about them in a way that is personal to your life story and communicating exactly what you are going to be able to do as senator,” Elfreth said.