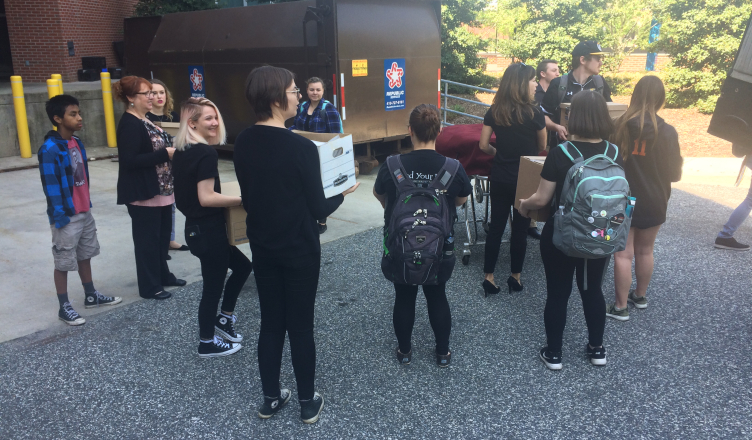 Photo by Karuga Koinange, The Towerlight

Several Towson University students carried boxes of human remains May 7 from the College of Liberal Arts loading dock into the forensics lab, room 3329.

Dana Kollmann, an assistant clinical professor for the department of sociology, anthropology and criminal justice, helped organize the transfer and is looking to examine the remains as part of a cemetery relocation project.

The remains appropriately arrived in a hearse, then were loaded on a gurney and draped with a pall before being carried inside. Kollmann said that she was excited to see her students engaged and respectful of the remains.

“I think they see that the work that we do truly matters,” Kollmann said. “We’re not in the field exhuming remains just because. We’re exhuming people’s grandmothers, people’s family members and I think they get a sense of the reverence we have to have for these remains by having a hearse come to Towson with remains covered in a pall. I think that is huge for them.”

Kollmann was hired by Julie Schablitsky, chief archaeologist for the Maryland Department of Transportation State Highway Administration, to analyze the remains in order to help rebury a historical African-American cemetery.

Schablitsky said that the landowner does not want the location disclosed, but stressed that the scientific team is working closely with the descendents’ community to ensure that their preferences are the priority.

Schablitsky said she relished that students were able to escape from a controlled environment such as a lab and be a part of a project that could affect real people.

“I think it’s important that students are able to work on projects that solve real world problems,” Schablitsky said. “It’s important for students to see how these projects happen and understand the challenges that they present and some of the privacy issues.”

This is not the first time that Schlabitsky has worked with Kollmann, though. She said that Kollmann has been her go-to archaeologist for a decade due to her extensive background in the field.

Kollmann’s specialty is studying skeletons, but she has worked in several countries and in different places around the United States too. She has experience working in mass graves and as a crime scene investigator as well.

“This is what I’ve done for years,” Kollmann said. “I treat it in a very clinical fashion. I’ve got a job to do and I’m trained to do it so that’s how I approach it. I try to involve my students in as much of my work as I can.”

Kollmann said that working on a project of this nature is enjoyable because she understands the impact that it could have on the community that is involved.

“I enjoy elucidating whatever information I can get out of bones to put a person’s life back together,” Kollmann said. “To many what looks like a skeleton to me is a person that has a story to tell, but that story can only be told from reading the bones.”

She asserted that it was important for the students to grasp the impact of this work. Polina Nikanorova, a junior studying forensic chemistry, said the transfer was fun and provided a memorable experience.

“I think it’s important that they see the humility and the compassion and the reverence that we have for human remains,” Kollmann said. “Some people also carry an emotional burden with the work that we do and I think it’s difficult work to do. Maybe they can find out early that this is not the job for them.”

Kollmann said that the next step is to to clean the bones and find out basic information such as what bones are present, age, sex and ancestry.

She said that she does not want to create a course around studying these remains out of respect, but plans to hand select students to help clean and photograph the remains. Kollmann expects more remains in the coming weeks and aims to finish her work by the end of the month.