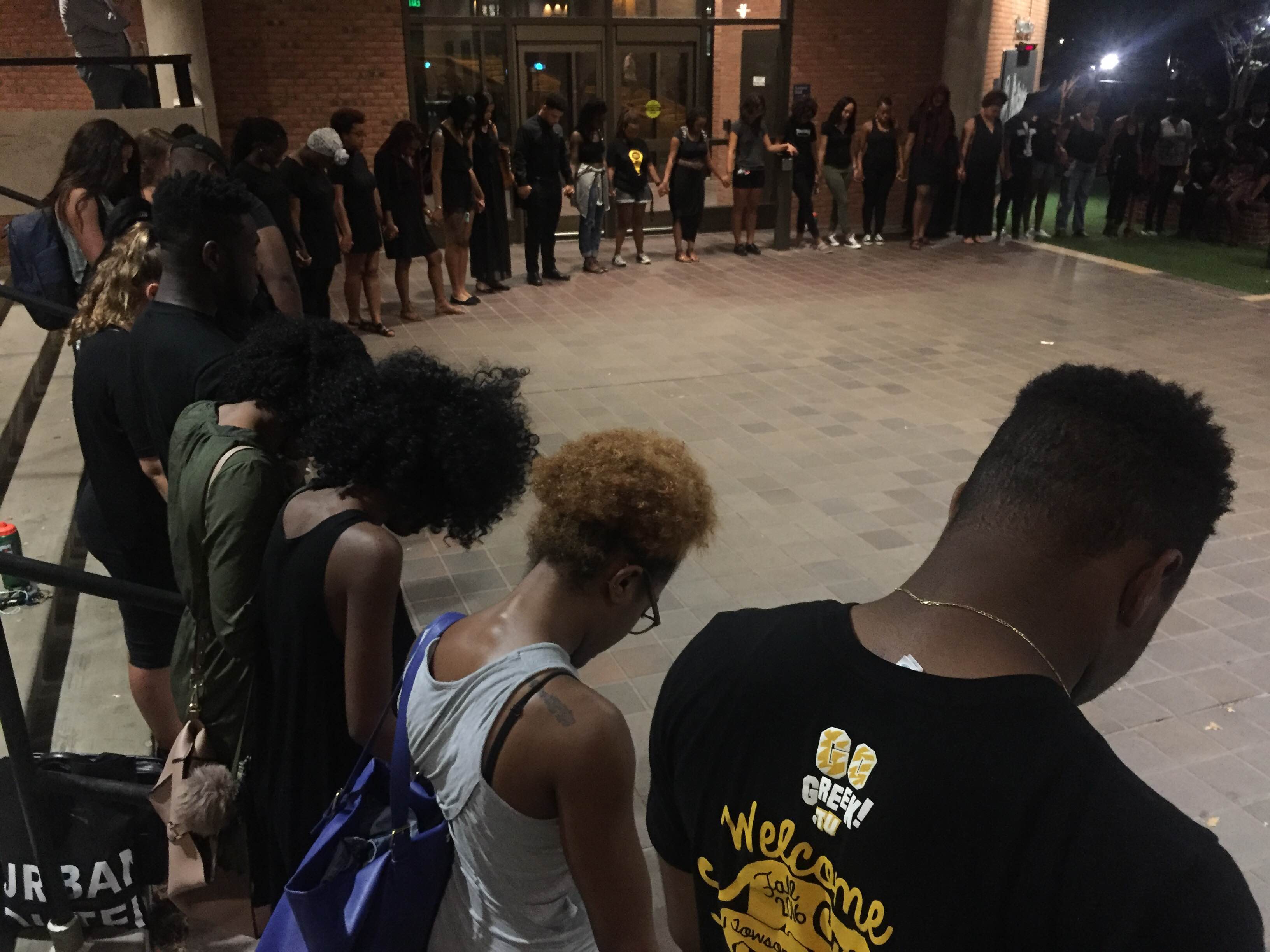 Members of the Towson community spoke out against prejudice and racial injustice last week during the second annual #BlackOutTowson solidarity event in Freedom Square.

The gathering was geared toward providing a safe space for students to acknowledge racial injustice and to kick off the school year by bringing major on-campus organizations together for one event, according to organizer and Alpha Phi Alpha alumnus Brandon Edwards.

“Students can come together and stand as one cohesive unit… To stand up and say that Towson students acknowledge racial injustice in America,” Edwards said.

To build that unit, Edwards and co-organizer Sey Elemo, also Black Student Union President and a Towerlight contributer, opened the floor for anyone from the crowd to offer words of affirmation or joy, or to express what they will contribute to the Towson community this academic year.

President of Towson Brotherhood Brian Clay spoke to the negative portrayal of black people within the media and other fields.

“People try to paint this image that black is bad,” Clay said. “People try to paint this negative image of being black and what blackness is…One thing I’ve always realized is when we come in circles such as this, we all recognize the negative portrayal of black people within the media…but we realize that we’re much beyond those stereotypes that they try to put on us.”

Earlier this year, the university began a full review of the hate/bias incident reporting process and in May, the Student Government Association and the Division of Student Affairs partnered to launch the #NotAtTU campaign, which focuses on creating an actively anti-racist, hate-free campus environment for all students.

The SGA will launch the campaign for this academic year in mid-September, according to SGA Director of Diversity Outreach Rishell Chambers.

A committee of University faculty and administrators are currently in the process of hiring Towson’s first Vice President of Inclusion and Institutional Equity.

The committee, which includes representatives from the SGA, Graduate Student Association and Council of Diverse Student Organizations, is primarily made up of University faculty from a variety of backgrounds.

During #BlackOutTowson, SGA President Taylor James announced a series of town halls, information sessions and discussions that will be implemented by the SGA in the coming months.

The first town hall, planned for Sept. 21 in the West Village Commons, will include an update on the demands set forth during the #OccupyTowson sit-in protest last November.

“I believe in speaking things into existence that you want to happen,” James said.

Vice President of Student Affairs Deb Moriarty spoke to the creation of “safe spaces” for students on campus.

“I am going to challenge this notion of safe spaces and ask you to create brave spaces,” Moriarty said. “The kinds of conversations we need to have on this campus to make the world a better place have to be brave, they can’t just be safe.”

Moriarty hopes to see students “stretch [themselves] a little” this semester, and she encouraged students to attend new events and create a campus environment where students are comfortable speaking to each other about their differences with an educational outcome.

“This is our year, and I firmly believe that,” Elemo said. “Even when you don’t feel like it, I want everybody to remember that you are Towson…You earned the right to be here, and nobody can take that away from you.”