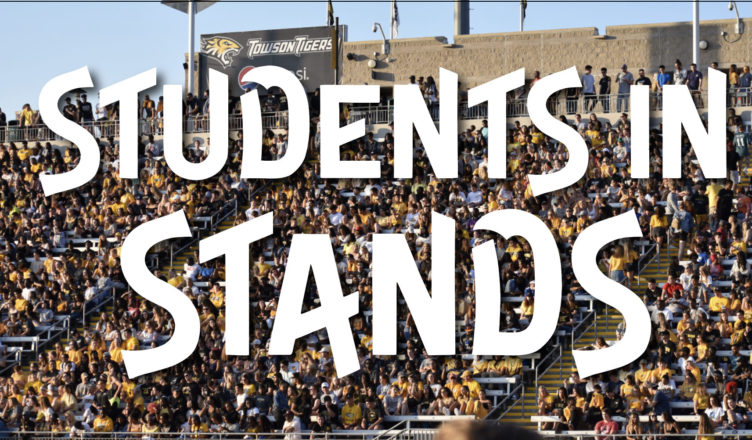 Towson has introduced some initiatives to increase fan attendance at Tiger athletic events since it has been a glaring issue for the last few seasons, especially last year.

On Aug. 23, the Towson Athletics Department launched the first step in bringing fans back to games with a new app for Tiger fans, Towson ROARwards.

The early games of the 2019-2020 season have shown an increase in attendance for many of the fall teams. The football team’s 42-3 victory over NC Central in their home opener boasted an attendance of 8,322, the largest crowd since 2014.

“It was fun and seeing everybody with their gold rush stuff was cool,” said senior Caitlin Pattanashetti, who attended the game.

Some students have found that a lack of activity on campus impacts whether or not they participate in the events that are happening, including sports games.

“There’s not really a lot to do on campus, so I think it’s cool to see the University take efforts to do things on campus, meet new people,” said freshman Charlie Margarida. “It really gives a lot of school spirit.”

The app, which can be downloaded for free in the Apple App Store and Google Play Store, is designed to give fans points for checking in at Towson home games.

“We want to create a better atmosphere at our home events and in return, reward our fans for  attending and supporting our Athletics teams,” said Fuller.

Those points can be redeemed for prizes, such as TU gear, a personalized videoboard message, the chance to throw out the first pitch at a future Towson baseball or softball game, and one devoted fan can even win an Apple Watch.

“We have a nice starter set of prizes right now but we plan to add various new items and  experiences throughout the course of the year to keep it fresh and exciting,” Fuller said.

The check-ins aren’t just limited to the games. Fans can also check in at Tiger Zone Tailgates, held prior to every home football game, to receive points.

“In addition to attending events, fans can share their check-ins on social media to receive extra points,” Fuller said.

Since 2014, majority of Towson athletic events have been witnessing a decrease in attendance. According to CAASports.com, Towson finished in the bottom half of the Colonial Athletic Association (CAA) for attendance in numerous sports during the 2018-2019 season.

Even though the football team reached the FCS playoffs for the first time since 2013, behind the top offense in the CAA, the average attendance for home games was 6,114, more than 3,000 below the CAA average of 9,283, and just 55% capacity of the 11,198-seat Johnny Unitas Stadium.

The lack of fans in the stands for games can have an impact on the game itself.

“Fan support is crucial at [Towson] Athletics events,” Fuller said. “Everyone feeds off of it – from our staff to the coaches and players. There’s nothing better than a loud, energized crowd atmosphere and more times than not, you find that it starts with the student section.”

Rob Ambrose, who has been the head coach of the football team since 2009, recalls the days when Unitas Stadium would be packed and explained how valuable that can be to a football team.

“There was a time where we moved the band and had to put them on bleachers because we didn’t have enough seats for our students and, during that period of time, the head coaches of the CAA would tell me that this was the worst place to play because our student section was so hard on them, it was very distracting,” he said. “We were a force to be reckoned with as a student body and it made a difference in the outcome of football games.”

The women’s basketball team captured their first CAA Championship in program history last season, yet their average home attendance was 677, good enough for sixth out of 10 in the conference. Men’s basketball averaged 1,380 fans per game, eighth in the CAA and 27% capacity of the 5,200-seat SECU Arena.

In fact, the only sport that Towson led the CAA in attendance last season was Men’s Lacrosse, whose average home attendance was 2,059.

In response to the attendance concerns, the Athletics Department has been taking measures to improve not only the in-game experience, but the playing surfaces as well.

Both the field hockey and soccer teams received new, artificial turf home fields. These fields have improved seating for fans, providing new grandstands, which have aided in the attendance increase for both teams.

“It is just one more thing that we are doing to invest in this program,” said Tim Leonard, the University’s Director of Athletics, when the first phase of the lower fields project was completed in August.

The women’s soccer team has totaled 2,288 fans through their first five home games, averaging just under 458 fans per game. The team has already surpassed their attendance total from last season, which was 1,688.

The field hockey team has averaged just under 331 fans per game, compared to an average of 125 fans per game last season.

Phase two of the lower fields construction will include an expanded grandstand seating, lights, a press box, and room for concession stands.

“It’s really cool to see the University take initiative, especially being a freshman,” said freshman Peter Ariano. “To see [the University] getting us involved is great.”

While the current efforts being made by the University are yielding positive results, students believe there is more that can be done.

“More student-sponsored events,” said Margarida. “The student body getting involved, more so than the college itself, that would be cool to see.”

Creating new spaces for these teams can also result in a better overall experience for fans, which is what the ROARwards app is adding to. Fuller said that the Athletics Department has more plans to continue making Tiger games more enjoyable for students and fans alike.

“We have a lot of new ideas planned for the in-game experience this season and we’re hoping we can capture some momentum from the student body early on and keep it going throughout the season,” he said. “We’re also placing a higher emphasis on getting our marketing materials out around campus and the community by utilizing street teams and tabling in high-traffic areas.”