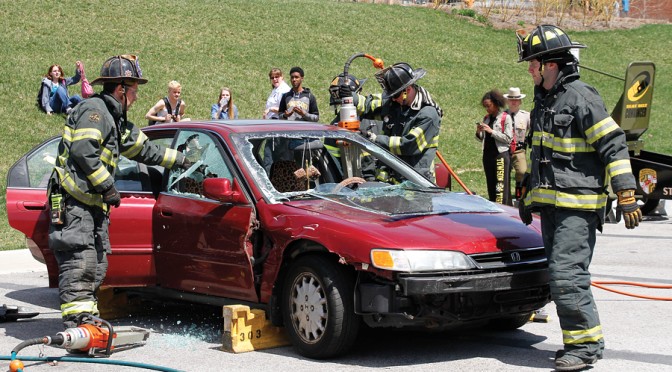 Students stood by Thursday afternoon as a K-9 Unit dog leaped into the air and bit down on a full-grown man in the middle of the Union’s Lot 9. The jump made the man stagger, but he did not fall down. Fortunately for him, this was not an arrest but only a demonstration orchestrated by the Baltimore County Police Department during Towson’s Safety Day.

Along with the K-9 demonstration, the Baltimore County Fire Department gave a “Jaws of Life” demonstration, which showed students how firefighters retrieve victims from damaged cars, step by step.

“[We do this] to raise awareness and to educate drivers on the risk of unsafe driving practices,” Baltimore County Fire Department EMS Lieutenant Jen Martucci said.

EMS Lieutenant Michelle Polich was also at the event, educating students how to perform hands only CPR on victims.

“We want to get as many people trained as possible,” she said.

Chair of the Safety and Security SGA Subcommittee Rebecca Ellison came up with the idea of TU Safety Day.

According to Ellison, she, along with Corporal Kia Williams of TUPD, collaborated to plan the event.

“We were brainstorming ideas for initiatives we could have and I thought something like Safety Day would be a good idea,” Ellison said.  “It started as kind of a smaller idea. We were just going to do tabeling with campus organizations that have safe options, but it

ended up getting larger because I talked to [Williams].  We put our heads together and it ended up becoming bigger than the both of us.”

Various tables showcasing Towson organizations like TU Health Education Services, Wellness Peer Educators, TU Counseling Center, ATOD Center and URG, who provided the food, were also set up throughout the lot and outside of the union.

“I think this really helps college students know that cops are ok and they’re not bad people,” Schenning said. 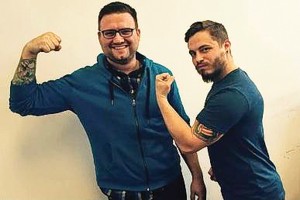