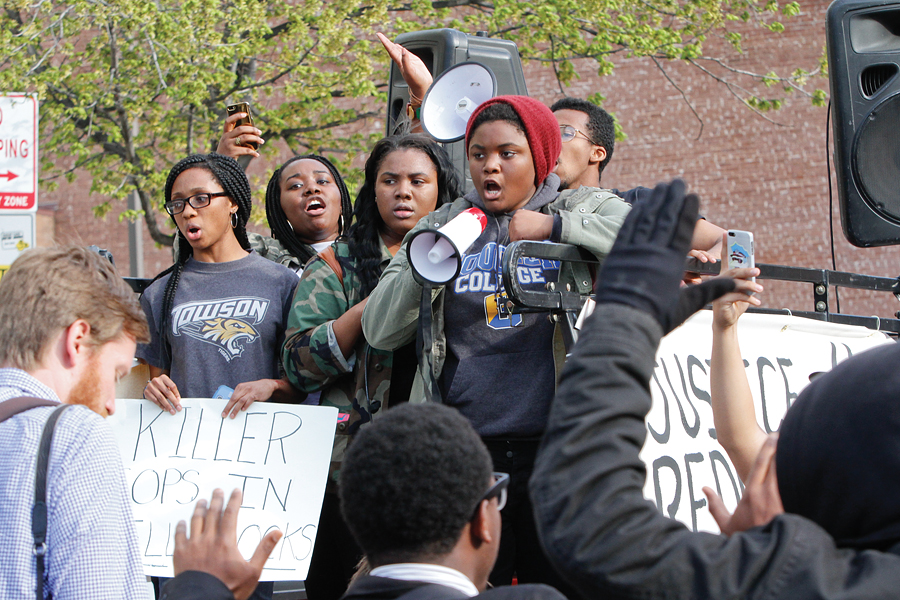 After organizing a rally on Towson’s campus, students Korey Johnson and John Gillespie led hundreds of students to Penn Station in Baltimore where they led a large, peaceful march through the streets to city hall Wednesday, April 29.

According to organizers, there were at least 1000 people in the march.

Johnson set a lot of the ground rules at the beginning of the march. While people were gathered at Penn Station, she told them all to leave if they were there to march for their own political agendas.

She also stressed the importance of keeping the rally peaceful. “We are not having that here,” Johnson said of the looting and rioting that took place in the city earlier in the week.

Johnson, Gillespie and a few other leaders in the bed of a red pickup truck spearheaded the march. “Justice 4 Freddie Gray” was written on banners hanging off both sides of the truck.

As the crowd passed through an intersection, temporarily stalling traffic, they were met with some support. A woman leaned out of her car while she blared her horn, waving in support – to the crowd’s cheers.

The crowd was not solely college students and not composed of any one racial group. As the students, families and members of the community marched, different sections of the line broke into various chants and cries.

“Whose streets? Our streets!”

At one point, Gillespie, through a loudspeaker on the back of a truck, led his own chant:

“Stand for something. Stand for justice. Stand with me Bmore,” he said.

Gillespie said that the crowd just wanted to see the mayor. One specific demand of the organizers and marchers is the reform of the Law Enforcement Officers Bill of Rights, legislation that gives heavy protection to officers during investigations of abuse or misconduct.

While there was some police presence, most of it was at the back of the line. There were no incidents between police and protestors that The Towerlight saw.

Upon arriving at city hall – a building that was heavily protected by members of the National Guard – Johnson and Gillespie called for a moment of silence.

After the message made its way to all the participants of the march, they got their wish. The crowd fell nearly silent.

Outside of city hall, student leaders from several colleges, including Towson, Goucher and Johns Hopkins and organizers shared their stories of how they have been affected by the incidents in Baltimore, and how their lives, in general, have been impacted because of their race.

From the back of the truck, not even an entire block from city hall, Johnson had a message for all of the students in attendance.

“This is happening to us,” she said. “This is our city just as much as it is anyone else’s.”