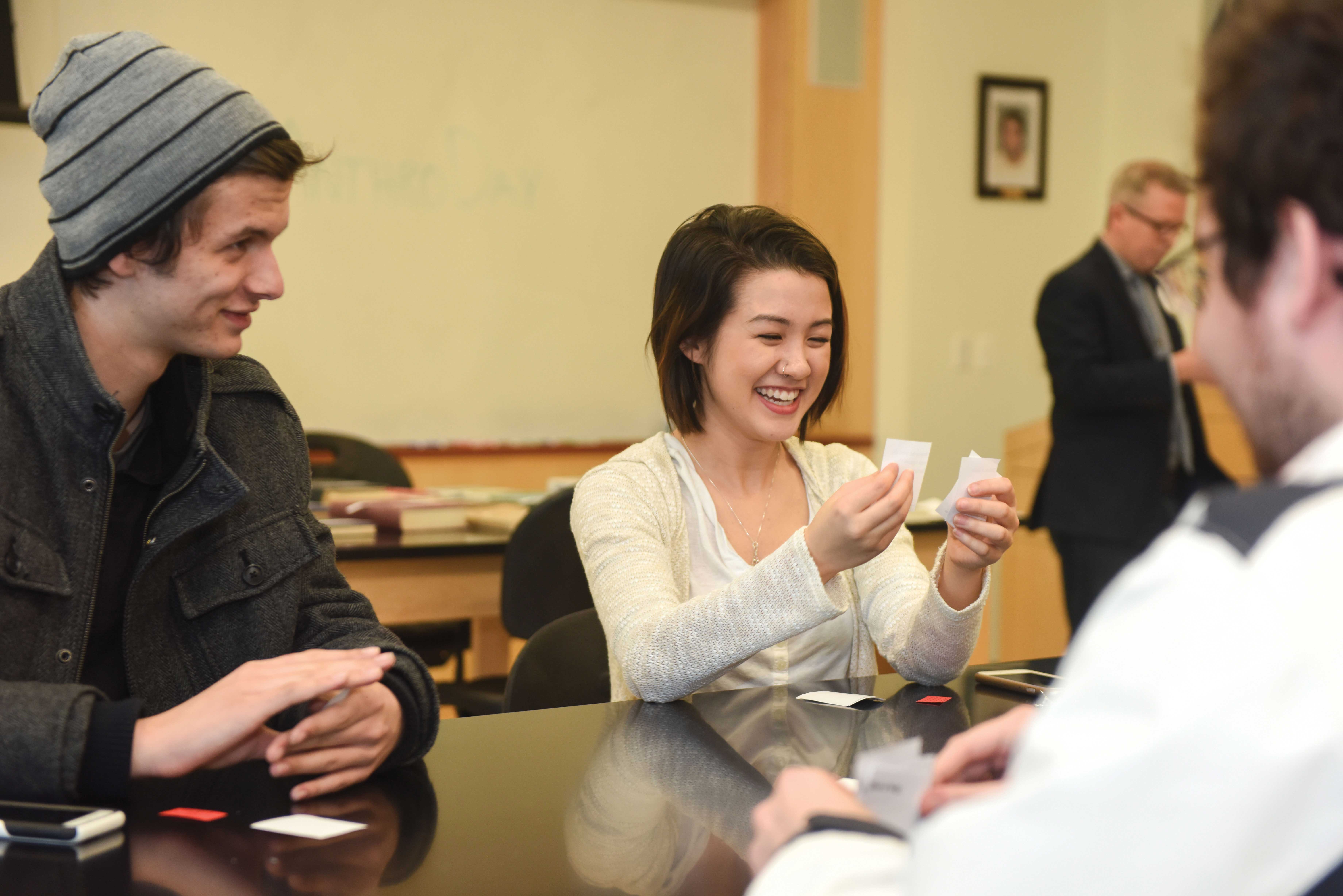 Associate anthropology professor Matthew Durington keeps a small stack of gently-used, student-produced board game prototypes on a shelf in his office and a pile of black and white paper cards on his desk. He’s interested in the gamification of learning, the combination of fun and curriculum.

“I think all of us play games, or we played games at one point in our lives,” he said. “Playing games sometimes includes very simple, logical steps, but it can become much more complex.”

The game was developed in part by students during an honors class Durington taught in spring 2014. It answered his calls for students to design something that would explore the ethical challenges of anthropological field work.

Black prompt cards challenge players with scenarios like being pressured into taking drugs, being attacked by a drug cartel or wanting to help the population being studied.

White answer cards range from “Seduce” and “Smoke it,” to “Back away slowly.”

“Painting a really complex, messy picture of field work is more appropriate, because culture is messy and complex,” Durington said. “Too often, it’s delivered as clear, efficient, linear and simple, and that’s not the case.”

Maya Mehta was a member of the group who proposed the game in 2014, before she graduated from Towson later that year. She said that her group started brainstorming by just talking about how much they enjoyed playing Cards Against Humanity.

“I think we realized that the structure of the game was the best way to teach students about the ethical dilemmas that anthropologists have to deal with because it actually requires the player to act autonomously when making decisions throughout the game,” Mehta said in an email.

Response to the game has been positive, according to Durington. He said that professors from all over the country have used the game in their classrooms and that it’s even being translated into French.

Durington’s “Anthropology Games” assignment is a regular part of his curriculum. This semester, he challenged one of his classes to develop games that would help students better understand and recognize the influence of key anthropological theorists.

“A lot of it for me is trying to get students to have as much ownership over the curriculum and learning process as possible, and this just seemed like one more way to do that,” Durington said. “It brings in another type of pedagogy, or teaching, into the classroom.”

Since graduating, Mehta has spent time teaching high school sex education, English and math in a small village in Fiji. She’s currently volunteering on permaculture farms in Costa Rica to learn more about sustainable development and plans to pursue a master’s degree in international affairs next.

Taking a creative approach to education, she says, is absolutely essential.

“While I was teaching in Fiji, I found that students were much more eager to learn and engaged when they were taught in a way that was different and more fun [than] a traditional lecture,” Mehta said.

Because Cards Against Humanity operates under a Creative Commons license, Durington was able to put his version online at anthropologygames.com, which he hopes will become a repository for any other games he and his students develop. In an ideal world, he’d like to see future projects extend to a mobile app format, where users can accumulate things like points while studying.

“Anything that smacks of innovation, people will latch onto and want to try out,” Durington said. “We’re practitioners of the field for a reason. We’re passionate about it. And we want that to translate to [students], too.”