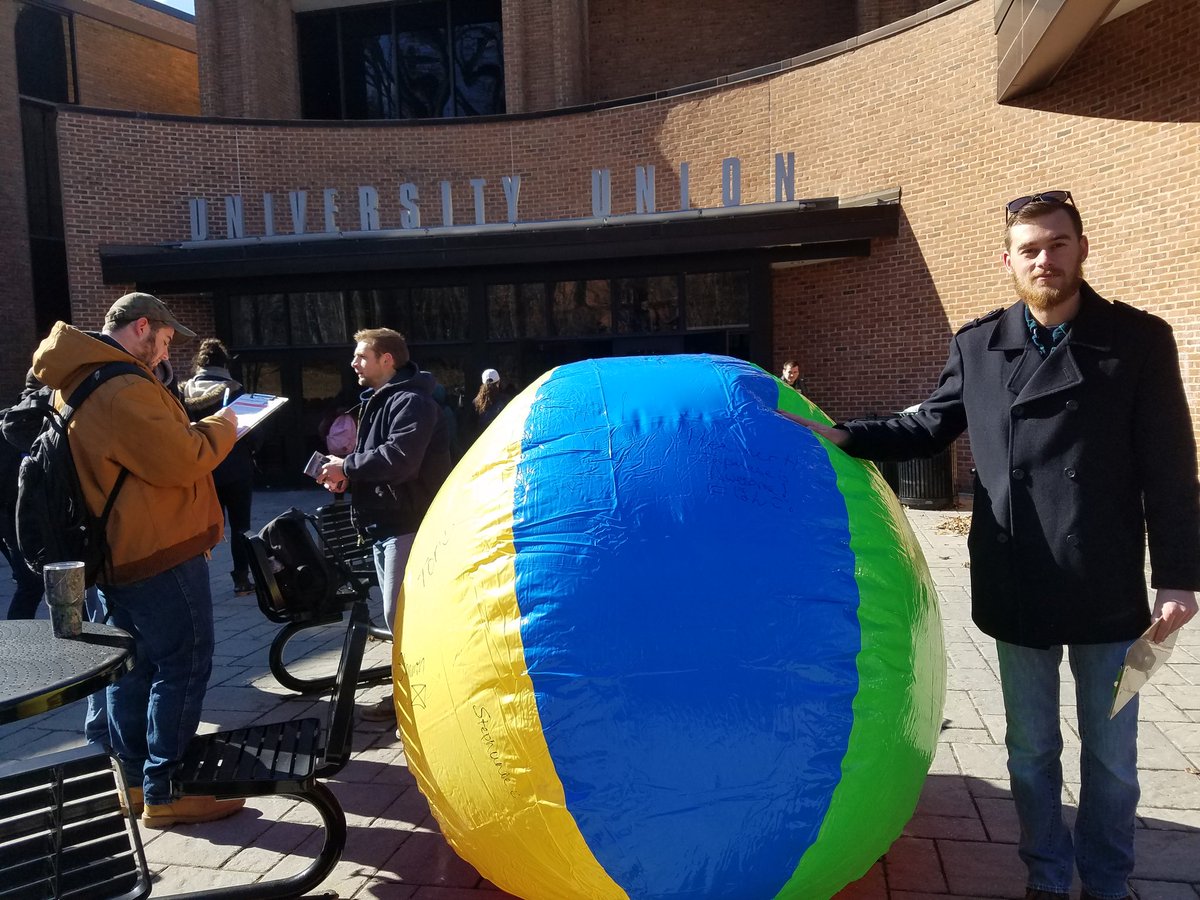 Members of Towson University’s chapter of Young Americans for Liberty,  a libertarian organization, protested Towson’s current free expression policy on Feb. 2 by asking students to sign a large “free speech ball” and their petition to change the policy.

According to the Foundation for Individual Rights and Education, public universities such as Towson are legally bound to adhere to the United States Constitution in all of their policies and regulations, including those pertaining to the First Amendment.

The members of YAL protested against Towson’s free expression policy on time, place and manner.

The policy states that students or student groups who are planning expressive activity in a public area, such as Speaker’s Circle or Freedom Square, must contact and obtain permission from the Office of Campus Life.

Towson does not permit group expressive activity in non-public areas, such as offices, lobbies and classrooms, however the University allows exceptions for areas that have been reserved.

YAL members said the time, place and manner policy directly violates the Constitution and strips Towson community members of their First Amendment right to freedom of speech by placing limitations on when, where and how these expressive activities can occur.

“We’re here to promote the message of freedom of speech, individual liberty, and the rights of everyone,” said Alex Staudt, YAL’s director of free speech. “We’re trying to support civil discourse.”

In previous reporting by The Towerlight, Vice President for Student Affairs Deb Moriarty explained that Towson’s time, place and manner policy is meant to create a safe environment for community members to express themselves.

Moriarty said that when students obtain permission from the administration, the University is better prepared to assess the amount of security needed for an event or where the event should take place to meet the needs of the size of the audience.

She added that Towson is legally obligated to be content neutral and cannot regulate which Towson community members can speak based on those individuals’ beliefs.

Still, YAL member Mitchell Oktavec is concerned about the possibility of the University restricting expression they do not agree with.

“This leaves the door open for potential censorship,” Oktavec said, “If the student is advocating for something that administration disagrees with, their application can be put at the bottom of the pile or rejected. Not to mention this is a public university so our First Amendment rights are applicable here.”

Freshman and psychology major Dani Deal also feels that the policy could lead to restriction of speech.

“I feel like there’s pros and cons to [the policy] because if it’s something we are protesting against the University for doing, then they’re of course going to be like ‘no, we don’t want you to do that,’” Deal said.

Members of YAL also support the notion that allowing uncensored free speech will encourage the students of Towson to conduct civil conversation about topics they are passionate about.

“I am noticing a disturbing trend in various college campuses, of administrators violating the First Amendment,” Staudt said. “Colleges are missing a sense of civil discourse. We can learn from both sides of any given issue.”

“One of the most inspiring things about free speech is knowing that my friend, who is a Marine, who was once deployed to Afghanistan, was able to change some of his views about Muslim people, because he was able to listen and understand a Muslim man’s point of view,” Oktavec said.

The students of this organization also recognize that there may be students who would use their First Amendment right to say things that aren’t necessarily ethically or morally sound.

“This is is a public area,” Oktavec said. “Everyone should be able to say what they want to say as long as they are not being violent.”

“If you’re trying to get a group of people to see your ideas, that’s different, but if you’re doing something to hurt someone’s feelings then that’s not a good idea. But otherwise you should be allowed to do whatever,” said Jamiolkowski.

Staut said “the only cure for bad speech is more speech.”

– Mary-Ellen Davis and Marcus Dieterle contributed to this article.