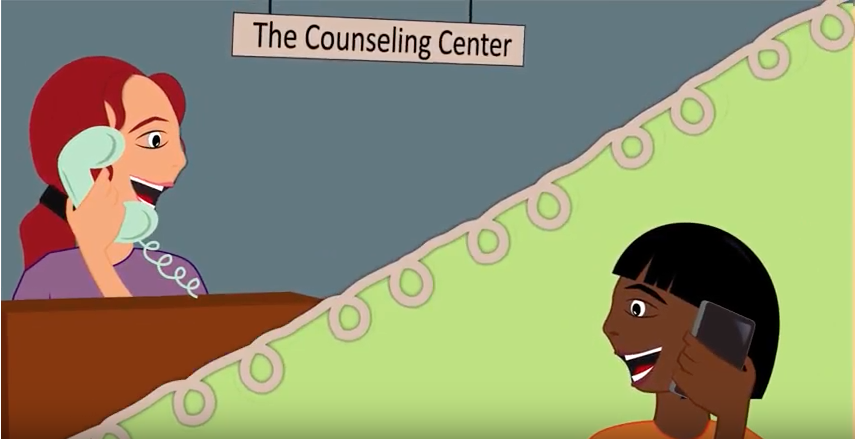 Senior Raven Jackson was recently announced the winner of the 2017 Red Ribbon Campus PSA Contest after she submitted a short video promoting healthy alternatives to drug use.

Jackson was joined by Allison Frey, a Towson health educator and co-director of the Alcohol, Tobacco & Other Drug Abuse Prevention (ATOD) Center. Jackson and the ATOD Center were awarded $1,000 for Jackson’s video, which they will put towards more alcohol and drug prevention work on campus, according to Frey.

According to Jackson, the minute-long video was meant to point out the importance of finding healthy alternatives to drug and alcohol use, instead of focusing on what drugs do to your body.

“At first, I had the idea of taking the classic ‘this is your brain on drugs’ and trying to flip it,” said Jackson, who is also the Counseling Center’s student outreach assistant and a media content creator. “But I couldn’t think of ways to do that in an animation, so I wanted something that could also have the graphics and the icons that could be easily digested by the audience.”

Jackson also recognized that college students are used to “being thrown information telling us not to do things,” spurring her to create content that pointed students towards finding alternatives to drug use.

Frey believed the video’s content fit perfectly with the messages that the Counseling Center is trying to send to students. Frey mentioned that one part of the video reminded her of Tigerfest, and how some of the other parts of the video were reminiscent of other alternatives on campus.

“We have a meditation room [in the Counseling Center] and just walking in the Union and seeing all those activities that people can just jump into at any moment versus getting into alcohol and drugs, so it just fit perfectly,” Frey said.

According to Frey and Jackson, the money won from the contest will go towards bringing more attention to being safe on campus through initiatives like increasing social media presence, starting a bus campaign and drawing more people to the spring carnival.

“We do a carnival in the spring, and since I kind of anticipate we need to use this money by the end of the semester, that’s kind of my thoughts,” Frey said. “How we can beef up our spring, which is really a safe summer send-off message for students, so thinking how we can really make that more fun and bring in more students.”

The carnival is meant to celebrate the end of the semester while reminding and encouraging students to have a safe and fun summer. It will be held May 13 outside of Ward and West, and have a variety of activities like carnival games, grilling, and a dunk tank, according to Frey.

Frey and Jackson both stressed that they also wanted to connect students with various resources already available, such as counselors, collegiate recovery programs, or even just “party smart” strategies.

There are various groups that students can join if they are trying to get away from drug and alcohol use, such as the Towson University Collegiate Recovery Community. According to Jackson, TUCRC is there for students who want to get sober and stay off drugs and alcohol.

Sophomore Lee Zweiacher, a geography and land surveying major, said he thinks flyers would be a good step towards further alcohol and drug abuse prevention.

“It’s kind of hard to reach a lot of people on campus because emails are rarely checked, so you can’t put it in that because not a lot of people are going to see it,” Zweiacher said. “The best choice I think personally would be flyers on the elevators because there’s nothing else to really see in an elevator.

Junior Gloria Emelike, a nursing major, thinks Jackson’s PSA was informative, citing the misuse of opioids as an example of drug abuse.

“What [Jackson] said was kind of right,” Emelike said. “There’s other things you can do instead of misuse drugs. There’s campus activities, like she said, self-care, and the health center.”