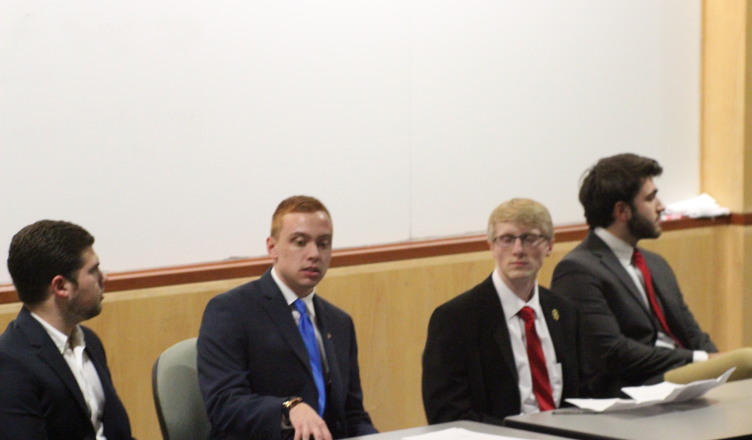 Billed as “The Rumble at TU,” the Towson University College Republicans and the College Democrats of Towson came together for an evening of debate, foraying into three topic areas: constitutional interpretation, education and guns.

The debate drew a large crowd, filling a large lecture hall in the Liberal Arts Building, and at times the attendees broke out in applause for points made by both teams.

The clubs’ presidents, Matthew Schwartzman (College Republicans) and Ryan Kirby (College Democrats) started the debate by introducing the format of the evening.

For each topic, three guiding questions were chosen by the moderator. While the debaters had a list of sample questions to prepare for the debate, they did not know which questions would be used the night of the debate.

The moderator for the event was Michael Korzi, a professor in the Department of Political Science.

The teams arguing the first topic – constitutional interpretation –  were Schwartzman and Tyler Williams from the College Republicans and Kirby and Connor McNairn from the College Democrats. Kirby and McNairn are both columnists for The Towerlight.

Schwartzman opened by affirming that “we support originalism… we look at the Constitution and what the framers meant when establishing the provisions in the Constitution.”

Citing the separation of powers principle, he cautioned that “with the living Constitution, we have seen an absolute unconstitutional expansion of the executive branch … the diminishment of the legislative branch … and the judiciary has become one of the strongest branches of government, which was not intended.”

McNairn opened the College Democrats’ arguments by saying that the living Constitution perspective is “to allow our current political dialogue to change or reconstruct how we interpret our founding documents.”

“[This approach allows] us to advance in society, it allows us to advance in our politics and dialogue,” he said. “Without that we would be lacking in a lot of the things we need today as a society looking to achieve progress.”

In crossfire, debaters considered landmark Supreme Court cases to explore judicial activism and the role of the courts and legislature when interpreting the Constitution.

Korzi’s second question for this topic pertained to the first amendment protection of free speech, specifically on college campuses.

Kirby opened by affirming support of free speech, but cautioned that there is a “growing stigma that college campuses are dominated by the left and liberals,” resulting in events like the violent protests that took place at UC Berkeley in September when controversial speaker Milo Yiannopoulos was invited to speak on the campus.

Contrarily, “events like this [debate] happen on college campuses, they are the norm,” Kirby said.

“What is differentiated is when there is a call to action,” he said. “If there is no call to action, then regardless of whether you agree or disagree with what is said, [it is allowed by law].”

McNairn argued that free speech issues “should be case-by-case basis handled by university administration. That university has to protect the ideals of its community as a whole.”

Schwartzman noted that there has “been a suppression of the right in regards to speakers on campus.”

“Because there is a line being drawn that isn’t within the Constitutional bounds, it’s arbitrary to what people’s morals and political leanings are. That within the educational system hurts Republicans more than Democrats.”

Kirby countered that inviting speakers is “absolutely your right, but if you choose to invite him we have the right to protest peacefully.”

Both sides agree that violence should not be condoned.

The final question of the constitutional interpretation topic asked the teams to select and defend an argument for eliminating a constitutional amendment.

Kirby opened debate by saying that he would get rid of the second amendment, the right to bear arms, noting that it is not an official party stance.

McNarin followed, “we are not arguing against that we should get rid of all guns. We’re arguing that there is no necessary function of the second amendment.”

For the College Republicans, Schwartzman made an argument for eliminating the ninth amendment. The ninth amendment states that just because a right is not listed in the Constitution, that doesn’t necessarily mean it’s not protected by the government.

“We believe the ninth amendment has been arbitrarily expanded by the courts to mean something it doesn’t even mean,” Schwartzman said.

The second topic of the evening was educational policy. Arguing for the College Democrats were Sarah Rozmiarek and Dallas Matthews, and for the College Republicans were Garrick Ross and Matthew Pipkin.

Korzi opened debate by asking about each team’s support or opposition to Common Core standards.

“Common Core has failed all of us,” Ross said. “It has failed children, it has failed taxpayers. We would like to see each state have their own say of how they navigate education.”

Rozmiarek opened her argument in support of Common Core by saying “we need national standards in education to ensure states don’t fall behind … when it comes to education.”

Pipkin acknowledged that education is a bipartisan issue.

“Look, if the methods were working and we saw progress in schools with Common Core by all means we would be for that,” he said.

Rozmiarek acknowledged that shifting from a proficiency emphasis to a year-to-year growth perspective would correct a flaw in the standards.

The debate focused on the question of what level of education is necessary to get a job, and how regional differences affect educational priorities.

The second question was: “Do you support increasing taxes on the rich in order to reduce interest rates on student loans?”

Pipkin cited the lack of a redistribution policy in tax code to question how taxing the rich would directly correlate to reducing the interest rate on student loans.

Matthews pointed to skyrocketing costs of college as a barrier to entry for higher education. He argued that rich people can comfortably afford these costs.

Ross countered, “we need to get away from this everybody needs to go to college” mentality.

The final question was on Secretary of Education Betsy DeVos’ recent change to Title IX law regarding sexual assaults on campus.

Both sides affirmed the need to take sexual assault seriously.

Pipkin argued that changing the evidence standard for accusations from clear and convincing evidence to the preponderance of evidence “gets rid of due process that these students have a right to.”

“We have now lowered the bar … for cases of sexual assault that couldn’t be prosecuted in a court of law because there’s not enough evidence,” Pipkin said.

Matthews countered by arguing that stigma and difficulty to obtain evidence are barriers that complicate these cases.

Ross rebutted, “we want to provide resources to educate individuals [about what to do when sexual assault happens,] but not sacrifice due process.”

In the debate’s third act, guns were the topic of debate. Arguing for the College Republicans were Brock Dixon and Nev Hartenstine. Justin Walker and Noah Fleming argued for the College Democrats.

Walker and Fleming opened by supporting increased restrictions, specifically closing the gun show and internet loophole, while preserving the right of people to own legal guns.

Dixon asserted the issue was not guns, but mental health issues and inner-city violence.

In support, Hartenstine said, “we need to help them [individuals] before we go to blame the weapon. The weapon is only the object they are using … criminals will get something to kill people no matter what.”

“Mental health is just a scapegoat when the real problem of guns is brought up,” returned Walker.

Dixon conceded, “yes, gun shows probably should have some type of background check, and the materials and resources to do so … we need to include state databases as well.”

The following question centered on the purchase and use of bump stocks.

Hartenstine opened that “bump stocks were not the brunt of the problem.”

He equated the banning of these accessories as banning large pickup trucks, as both have the potential to making attacks deadlier.

The final question asked the participants to consider whether gun violence victims should be allowed to sue firearm manufacturers and dealers.

Walker opened, saying that this should be allowed when there is negligence.

“There’s no need to give special protections to the gun industry that we don’t have for auto manufacturers [when there are design flaws,]” he said.

“You can’t get your day in court? That’s un-American,” Walker continued.

Dixon agreed that a faulty gun is an instance where lawsuits can be brought.

He added, “I don’t think a gun manufacturer should be punished when a seller doesn’t do their job, their legal process.”

He pointed out that the nature of high profile events may make it difficult to try cases in the communities where they happened.

Fleming countered, “it’s irrelevant where we try them [gun manufactures and dealers], we should be allowed to legally try them.”

In wrapping the event, Schwartzman and Kirby said they were glad to see a good turnout for the event and would look for ways to collaborate and debate again in the future.