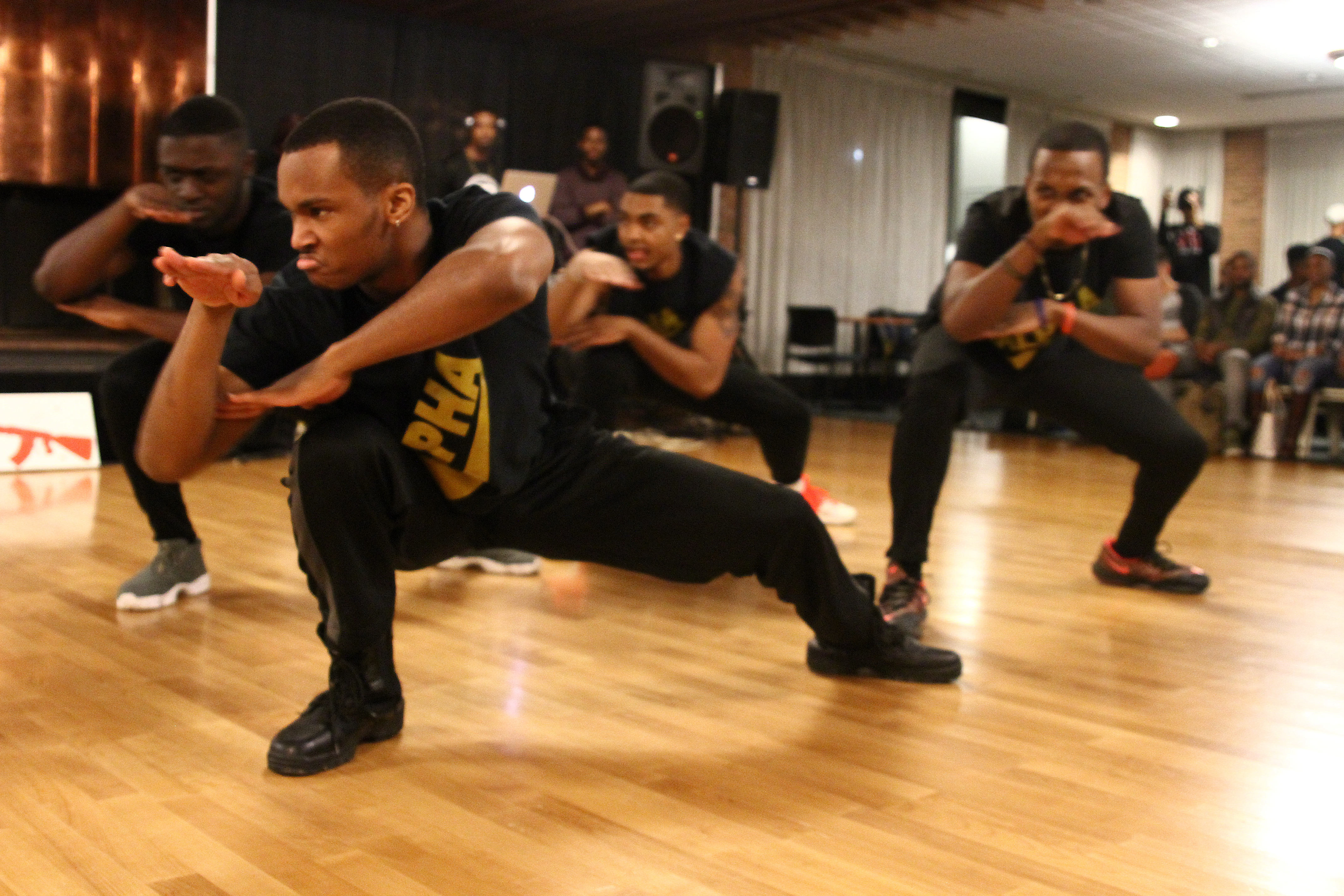 The women of Towson’s Trend Models strutted up and down the Potomac Lounge dressed in red clothing with short, black silk robes overtop. The clicks of their heels could not be heard over the thumping of music that accompanied their showcase.

Their performance was just one of several during the Love & War show hosted by The Lunch Table, Sunday, Feb. 21.

“The purpose of the show was to create an opportunity for artists and performers to show their talents to a large scale audience,” David Abraham, senior and founder of the Lunch Table, said. “I feel like sometimes artists don’t get the appreciation and respect they deserve. So this was a way to try to gain them that respect.”

Abraham and his co-host Tamara Benbow took the audience through the night, introducing each performer and providing a little fun along the way.

“Me personally, I love hosting events,” Benbow said. “This is something that me and David want to do with our careers, so the question for us is why not host shows? We want and need to get ourselves out there as much as possible. It’s all a part of networking your craft, if you will.”

Abraham said that his passion for entertainment and desire to further his knowledge of production and media is what prompted him to want to host the show. He also wanted the Lunch Table to be an opportunity for students in other majors to gain experience in their fields.

The 16 different performances throughout Sunday’s show included everything from the Trend Model’s showcase to those who performed spoken word, dance, music and Greek strolls.

The night opened with a spoken word performance by senior and psychology major Gabriel Flood, who recited a poem he wrote called “DOEAS (Dreams of an Endless Sea).”

“My inspiration was to just create a piece that stayed true to me and that would woo the crowd,” he said.

As he finished he was joined on stage by his friends Yashi Yah and John Evans, who performed a song and rap with him called “Gleam.”

Although they are not an official group, the three enjoy collaborating on music together.

“The challenges [of performing as a group] are just making sure you’re in sync, so you just have to practice as much as possible,” Flood said. “The benefit is if you really have it together, and there aren’t any technical difficulties, then it just ends up being incredibly dope.”

Flood said that he has previously performed on Abraham’s radio show and one of his live shows and was happy to do so again.

“I wanted to get involved because he always shows love,” Flood said. “That’s the homie, I appreciate him reaching out to me. I perform at Towson all the time. It’s always love.”

A number of performers followed Flood, including a female duet, a guitarist, a performance by Alpha Phi Alpha, a dance by Towson’s Soul Dance Team and a spoken word performance by Kontrahdiction.

When he took the stage for his piece, Kontrahdiction began by addressing the audience to tell them that his spoken word hip-hop piece, “addresses the whole ‘All Lives Matter’ thing that’s going on,” which received significant applause from the audience.

After Kontrahdiction, a 13-year-old family member of Abraham took the stage for a vocal performance, followed by a dancer called Gizmo, and then a spoken word piece called “Man of Steel” by Joozy Joe.

“Strolling is a very big thing that Greeks do so we knew we could entertain the crowd by strolling,” senior Terran Foster said.

Foster said that his fraternity often performs at shows like Love & War, as well as larger events and performances for high school and grade school kids. They prepared for Sunday’s event just two days before the show after learning an old school stroll they found online.

“It was cool,” he said. “Just being able to go and perform with my brothers was a good feeling. The crowd loved us, as usual, and we had fun while entertaining them.”

Benbow said that the purpose of the Lunch Table is to help those involved in the organization either prepare for their future or stay involved on campus, and to encourage other student groups to work with them.

“We are an organization that loves putting ourselves out there but also helping everyone else get themselves out there as well,” she said. “This goes hand and hand with last night’s event because as we are gaining for this amazing experience, you have the performers branding themselves as well.”

Abraham also said that, like a school lunch table, the organization hopes to be a place where students can talk freely with one another about topics like relationship drama, school, politics, sports and more. They do so by hosting these talks or shows on camera and uploading them to YouTube for viewers to watch and comment on.

Sunday’s show was also an opportunity for the Lunch Table to gain brand recognition and, because they are a new organization without access to SGA funding, a fundraiser for future events, equipment and marketing merchandise as they continue to grow.

“The Lunch Table is looking to grow as far as members, and spreading into different cultural groups on campus,” Abraham said. “We want everyone and anyone to feel like they can be involved in the show. This campus is so large we want to explore more of what it has for us, and more of what we have for them.”

To get involved in the Lunch Table email Abraham at dabrah3@students.towson.edu or follow them on Instagram @TheLunchTableInTowson.