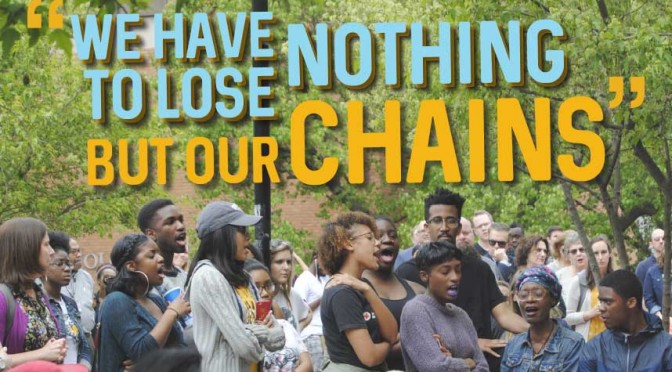 Towson University students communicated intense frustrations with the administration’s response to issues regarding recent bias incidents on campus during a unity rally in Freedom Square, April 22.

The rally was organized just hours after an unknown person defaced writing on the chalkboards at Freedom Square.

Prior to the defacement, the chalkboards showed direct quotes from and statements supporting the black female workers recently accosted by a white male in the College of Liberal Arts cafe. After, one of the boards displayed the words, “Satan Rules Towson,” with a drawing of a demonic figure, while the other board was smudged and displayed the Greek letters from two on-campus chapters.

“That right there is a visual representation of what it is like as a black woman in America when your pain and your words and your experience can just be erased from the movement, from this university, from everything,” student activist Breya Johnson said. “They did not just erase words, they erased our experience.”

After they were defaced, the Freedom Square boards displayed letters from both Chi Phi fraternity and Phi Mu sorority, both predominantly white organizations.

According to Chief of Police Bernie Gerst, TUPD has commenced an investigation into the incident, and they have found images on the security cameras surrounding the chalkboards.

Gerst stressed that TUPD will be using all available resources to make students feel safe.

Inter-Fraternity Council Diversity Chair Cordell Easter said in an email that the defacement “was done by a different group of people who have no ties with Greek life whatsoever” and that the individual chapters are dealing with the incident accordingly.

The rally was a renewal of an intense emotional upheaval built in the wake of the #OccupyTowson movement in November 2015.

“So many times we’re silently carrying this burden on our shoulders, and we’re slowly crumbling,” student activist Bilphena Yahwon said during an emotional exchange at the rally. “Nobody is paying attention because we don’t have proof. We can’t show you physically the harm that this is doing to us and unless someone is physically harming us, you don’t take it seriously.”

Attending students expressed disappointment that Vice President for Student Affairs Deb Moriarty and Assistant Vice President for Student Affairs Santiago Solis were often the only members of the administration speaking about this issue on behalf of the University. Students also expressed frustration toward what they see as slow responses from the university to racially motivated bias incidents and in their efforts to protect Towson’s nonwhite students.

“As we stand here in solidarity, we have to understand that solidarity is not enough,” Gillespie said. “You have to actively engage in practices that destroy anti-black racism, institutional racism and systematic oppression that black people at this campus, black people in Baltimore and black people in this country face every single day.”

The Black Student Union hosted an open forum April 20 to discuss solutions to the issues surrounding the incident at the CLA Cafe and the new hashtag #TheTowsonIKnow.

The hashtag was created by the BSU as a way for students to voice their specific frustrations, concerns and reactions to Towson’s responses to bias incidents on campus.

“You can write your own reactions because not everybody experiences Towson the same way,” BSU member Russhell Ford said. “People used their own experiences to really voice how they felt Towson was going about the situation.”

Sociology assistant professor Elyshia Aseltine, who is not tenured, spoke and said that there is a lot of fear amongst untenured professors to speak out on issues affecting campus, because they worry it will cost them their job.

Towson’s promotion and tenure policies are in the process of being reexamined and revised.

Students at the rally also expressed frustration with Housing and Residence Life, and said that the department is not doing enough to protect on-campus residents of color.

“I know our professional staff, student leaders and student staff think long and hard about how to create strong, welcoming communities,” Director of Residence Life Ron Butler said. “Obviously there’s instances and experiences that you’ve had where we’ve failed. We’re going to do better.”

Butler said that if by the end of the fall semester students still feel that Housing and Residence Life has not taken the steps that students need to feel safe he will resign his position.

Member of a newly-formed ally organization, Towson University White Allies for Radical Solidarity group, Nora Holzinger said that the group formed to address the University’s failings in responding to issues of hate and bias on campus.

The mission of the group is to create a network of students interested in direct action and community building for the benefit of students of color, the LGBTQIA+ community and the underrepresented groups and organizations at Towson and in the larger Baltimore area.

“When we heard about the CLA Cafe incident, it was sort of like a ‘home turf’ incident,” WARS member and SGA vice presidential candidate James Mileo said. “You can’t come into this space and disrupt it in such a manner, especially when it’s about racial inequality.”

Holzinger stressed the need for Towson to protect and value students of color and for white students to be vocally anti-racist.

During the rally, University President Kim Schatzel commended everyone for coming together.

“I think having the campus here is a symbol of the fact that this is a united campus that will not tolerate hate behavior or hate speech,” Schatzel said. “In fact, our desire and our relentless pursuit for inclusiveness is something that joins us at Towson University.”

In an April 20 campus-wide email, Schatzel outlined efforts to improve the transparency, effectiveness and responsiveness of the university’s Hate/Bias Response Team based on specific suggestions from the Social Justice Collective.

One of these efforts included placing Solis in charge of leading a full review of the hate/bias incident reporting process.

“It is important for us as an institution, as an administration, to recognize that we have made some mistakes, that some of our systems are broken and we’re trying very hard to fix those,” Solis said. “I am here to put a face on that process.”

According to BSU public relations chair Joshua White, BSU has taken steps to work with both administration and the Student Government Association to voice student concerns over the past weeks.

The SGA was required to attend the April 20 BSU forum. They have worked to station a security guard outside the BSU office and they are currently in the process of lobbying the administration to include hate/bias reporting on all syllabi.

“I would want to see Towson become a place where we’re so firm in our beliefs that [racism] has no place here and that we’re not accepting of it, so that no one with that mindset would even want to be here because they see how united we are against it,” James said. “We will just not accept it. We will not tolerate it.”