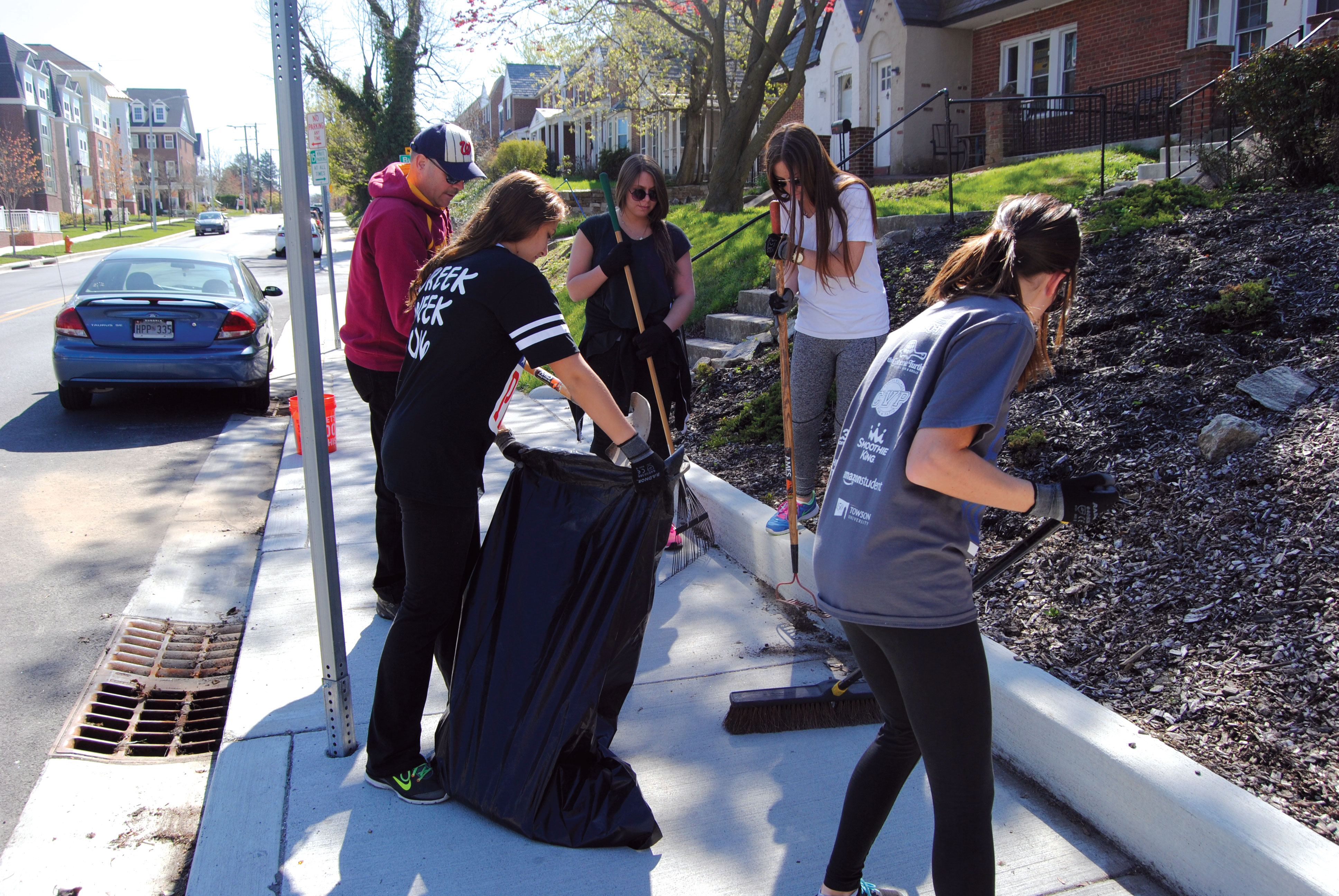 Phi Sigma Sigma members Melanie Ossi and Jenna DellaRatta snap fallen branches from overgrown trees along the border of Burkleigh Square Community Park April 16. On the opposite side of the park, which sits just off Burke Avenue near campus, another group of students rake leaves alongside area residents. They chat idly as they work.

Ossi and DellaRatta participated in Towson University’s annual community service day, The Big Event, which sees TU students travel off campus and into the Greater Towson community to help residents with household repairs and cleanup.

“Being in college, I don’t think we exactly realize that actual people who aren’t college students live here, too,” DellaRatta said. “And I know that there are times when they get upset with some of the things that we do. So, it’s a good way to get back to them and show that we actually do appreciate that they live here and keep that part of the community nice for us.”

This year, over 2,500 students, faculty and alumni registered to volunteer as part of The Big Event, and about 1,900 actually participated, according to Drew Voigt, director of The Big Event.

These participants serviced nearly 200 homeowners and nonprofits throughout the day, according to Voigt.

Voigt said that the day went well, but that he wasn’t able to get as far out into the community as he would’ve like. Instead, he and his fellow organizers stayed at base camp in the Glen Garage, where groups checked in earlier that morning. He said his day was spent problem-solving and accounting for groups that didn’t show up.

“I think at the end of the day we had a really good turnout, really good showing. Everyone seemed positive and excited and ready to help serve the community,” Voigt said.

Burkleigh-area resident Linda Hiss has lived just outside campus for more than a decade. Her house sits along an alley littered with fallen branches and debris. She said that Towson students from The Big Event have been helping clean up her neighborhood for years.

“Some of the Towson kids kind of contribute to the trash around here, so they clean up our alleys and clean up our community park,” Hiss said. “It’s helpful because we’re in charge [of park upkeep], so it’s a lot to keep up with.”

Ossi has participated in The Big Event multiple times during her time at Towson.

“I feel like we kind of take our community for granted a little bit, so I think it’s nice to give back,” Ossi said. “I think it’s just really important to come and help and be supportive and friendly and stuff like that.”

Voigt has been involved with planning the Big Event for the past four years, he said that he looks forward to seeing the program grow. He cited this year’s partnership with the University’s satellite campus at TU Northeast, or TUNE, as an example of the program’s growth.

He said that around 36 students, faculty and alumni worked to improve the area surrounding that campus in Harford County, rather the neighborhoods near the main campus.

Sponsors for The Big Event included both University organizations and outside businesses.