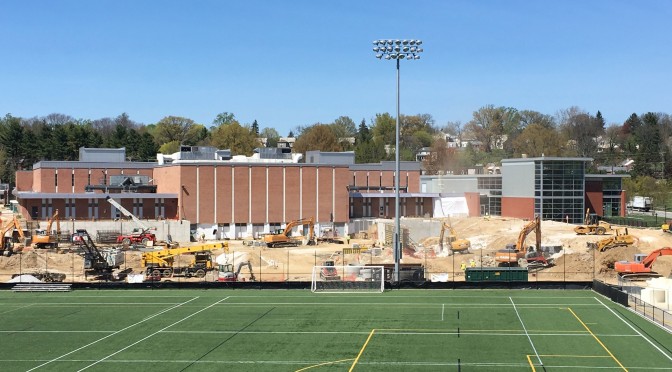 Campus Rec Associate Director of Facilities and Operation Tia Freiburger said that she has not noticed a decline in the number of students using Burdick Hall’s gym facilities, despite ongoing construction around the building.

Burdick Hall’s expansion is expected to be “open and fully operational” by the Spring Semester of 2018, according to Freiburger. The 94,000 square foot addition will cost around $34 million and will double the size of the building.

Student Matthew Montgomery works at the Fitness Center and continues to use it frequently.

“The only problem I have with it is the bridge [to West Village],” he said.

Parts of the path leading up and over the bridge were blocked off to safely accommodate construction, Freiburger said.

She said that they will reopen either when safety is no longer an issue, or when the facility expansion has been completed.
Montgomery will only be able to enjoy the expansion for one semester, but is looking forward to a “bigger, better Burdick.”

Freiburger said that new features will include an elevated sprint hill, five group fitness studios, two multi-purpose activity courts, a re-opened climbing wall and an expanded outdoor adventure and trip center. A new functional fitness challenge course will be designed to be accessible to people of all skill levels. The course will not be timed and will “provide an area for functional training and fitness movement that is unique to the traditional free weight [and] cardio areas in a typical fitness facility,” she said.

Senior Luis Juarez used to play soccer until he tore his ACL, but now he lifts weights and exercises for himself. He said that he has also not been hindered by the construction.

“It’s all about motivation,” he said.

Exercise science major Marc Vassar said that his main frustration with the construction is the extended walk around campus to get to the Enrollment Services building.

“It looks like they’re not even working,” he said. “Just shuffling dirt around.”

But he said he does not let the construction deter him from his dedicated workout.

“I’m there Monday through Saturday,” Vassar said. “I like to stay in shape, to feel good and look good. It’s personal to me, and gets me started for the day.”

Ultimate Frisbee club member Annalise Humm has found it more convenient to use other gyms in the area, due to space constraints caused by the construction.

“There used to be an upper level and a lower one,” she said. “Now it’s crowded and makes me feel claustrophobic,” she added. “Other people I know have said it feels crowded as well.”

Humm also said that the construction is unattractive and makes it inconvenient to get around.

Freiburger does not foresee any more complications within the construction, but said that, as with any project, unforeseen situations may arise.

She added that Facilities and Campus Rec plan on doing the best they can to communicate with campus through signs, social media and other sources to let students know of any closures or complications. 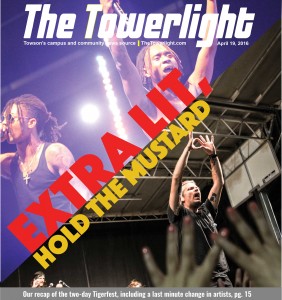