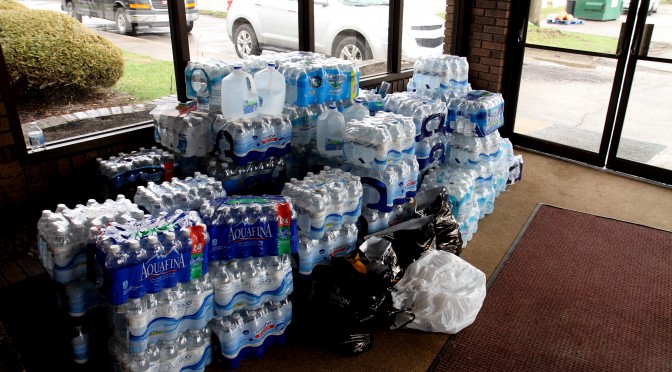 Bottled water is an expensive industry. According to the International Bottled Water Association, Americans drink more bottled water than any other packaged beverage, including soft drinks, and bottled water now totals $16 billion in wholesales. Freshmen Nima Sherpa and Suphitha Phawapoothanon say that’s way too much.

Sherpa and Phawapoothanon are part of Towson’s “Take Back the Tap” campaign, a promotion of Food and Water Watch, a non-profit consumer rights group which aims to promote tap water over bottled water on campus.

“If you buy water bottles, it might cost you thousands throughout [your four years of college],” Sherpa said.  “If [tap water] is free, then why shouldn’t you drink it?”

The campaign advocates for the use of tap water rather than bottled water, which can cost up to 500-1000 times more per liter in some areas, according to BMC Public Health.

The campaign also aims to promote the use of reusable water bottles, which cut down on the number of non-reusable plastic bottles that can end up in landfills and oceans — and take thousands of years to biodegrade.

Sherpa founded Towson’s “Take Back the Tap” campaign last fall and has spent the year tabling, advocating and aligning with organizations like the Student Government Association to help stop the norm of using single use plastic water bottles on campus. Phawapoothanon joined forces with Sherpa to create a more effective network.

“I kind of just jumped in,” Phawapoothanon said. “When I talked to [Sherpa] and how passionate he was, I got inspired.”

“Take Back the Tap” aims to create a new culture where students on campus rely on reusable water bottles like canteens instead of buying single use plastic bottles from vending machines.

The campaign has had success on campuses across the nation, instituting full and partial bans on plastic water bottles at the University of California, Berkeley, Harvard University, Duke University, Syracuse University, and more.

Sherpa and Phawapoothanon spoke at the SGA’s General Assembly meeting on April 18 where they advocated for the phasing out of plastic water bottles. With a 13-10 vote, the SGA passed a resolution in favor of advocating to University administrators for an injunction on single use plastic bottles.

“We’re proud to set the bar high for other universities,” SGA President Taylor James said. “We are excited to provide opportunities for campaigns like this to thrive.”

However, according to Director of Corporate Relations and Major Gifts Ron Brown, Towson is in the middle of a 10-year contract with Pepsi, which provides both the water and soda bottles sold in vending machines throughout campus, making it difficult for the university to ban plastic water bottles altogether, at least for the next few years.

But Sherpa and Phawapoothanon are focused on advocacy for tap water and educating the campus on using reusable water bottles, which can save students money and can help decrease their carbon footprint.

“We want to [instill] the norm of using reusable water bottles on campus,” Sherpa said.

While a total ban on single use plastic bottles might take some time, Sherpa and Phawapoothanon are committed to raising awareness in the meantime.