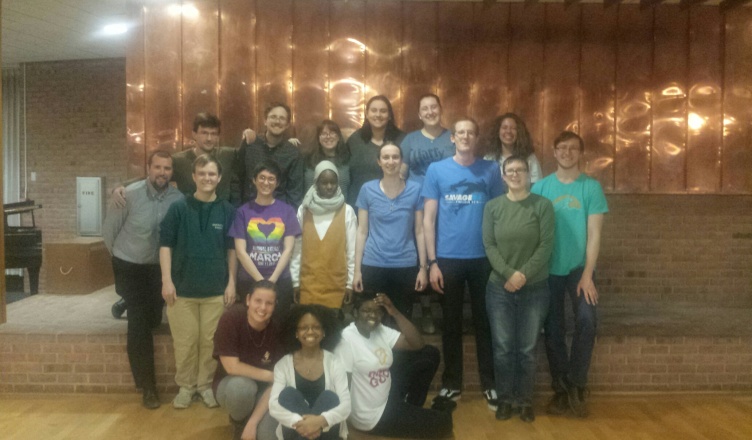 I’ve been dancing since I was four. I’ve done ballet, jazz, contemporary, tap and have now been teaching Zumba, which is a mix of Latin and hip hop, at Towson for two years. With so much experience under my belt, I walked into Towson University’s Ballroom Dance Club rehearsals thinking ballroom dance was going to be a piece of cake.

Safe to say, that form of dance was the entire cake, and then some.

I stepped onto the dance floor in Potomac Lounge with about 20 other students, thinking I was going to blow everyone away. A professional instructor stood at the front of the room to teach us the basics of Bachata, a dance style from the Dominican Republic that’s all about hip movements. The moves came to me really easily; it reminded me a lot of Zumba, and so I found myself naturally moving and hardly having to think about it. That’s about as far as my confidence got me.

After learning the basics, it was time to partner up. I got with a guy, named Brandon, who I’d never met before, which is where the first source of difficulty came in. I’d never danced with a partner before, aside from a couple of steps in a contemporary routine in other dance classes, and believe me, it’s not as easy as it looks.

I was constantly apologizing for stepping on his feet, and following his lead was more difficult than I imagined. I discovered that I’m actually not very good at letting another person lead me. I found myself directing him a few times and had to stop myself. As the instructor began to add on more moves, I had to focus on not only trying not to injure my partner, but also remembering choreography that I wasn’t familiar with.

Throughout the class, we rotated partners, so I danced with most of the class at least once. My partners had varying dance levels. For some, it was their first time too, so the experience was less intimidating knowing I had others to connect to. However, most of them had been coming for weeks. Luckily, they were understanding when I tripped over them, and laughed with me when we completely butchered the choreography.

I learned from Laura Pomeroy, president of the Ballroom Dance Club, that the group does a lot of different kinds of ballroom dances, from waltz to swing, to cha-cha, and even salsa. Each week, TU students meet up in the Potomac for free to do a different level for the dance they’re on. Pomeroy then told me that this week was level three of Bachata.

That explained a lot.

Not only do they dance every Tuesday; TU’s Ballroom dance club does performances throughout the school year, as well as host a few events. Although the group does not formally compete, Pomeroy told me that the group is set to perform at Allure Dance Team’s showcase in a few weeks, and that they had events like their End of Semester Ball, to celebrate months worth of dancing. The group also meets on Thursdays throughout the semester in Freedom Square, for social dancing. I was definitely impressed, to say the least.

By the time the class started to wind down, we had learned all of the choreography for the bachata dance and all that was left was to practice. The more we did it, the more I started to catch on. Before long, I knew exactly where to put my hands and feet and was twirling around the floor with my partners like it was second nature.

When class was over, I was actually disappointed. I couldn’t believe how much fun I’d had ballroom dancing. One thing is for sure, I’ll never underestimate ballroom dancers again. It takes some really awesome skills to dance like that.

And as for the entertainment aspect of it all: I had a ball.