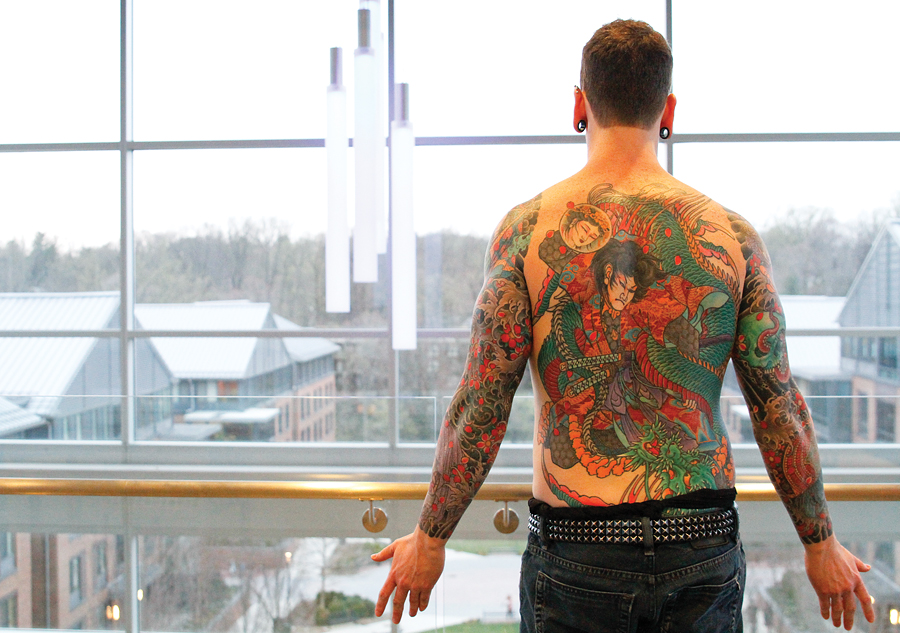 The Asian Arts and Culture Center brought tattoo culture to Towson’s campus with Tattoo Fest! April 15 to raise awareness for their exhibit “Perserverance: Japanese Tattoo Tradition in a Modern World” and explore tattoo art across the globe.

“We really want to engage the students more,” Nerissa Paglinauan, program manager at the Asian Arts and Culture Center said. “We want them to know that we are here and we are here to serve the students. That’s something that I don’t think happened in this way as much, so we really wanted their involvement in creating this festival and having them have a hand in it.”

The festival featured presentations by guest speakers who talked about tattoo culture in the United States, Japan and other places abroad. Josh Flemembaum, a client of the “Perseverance” tattoo artist Jakoh Horitaka, displayed his full body tattoos to the audience and spoke about the extensive process of being tattooed.

Local tattoo artists like Imani Brown of Washington, DC, and artists from the Baltimore Tattoo Museum, were also in attendance to show off their artwork. Brown works primarily in the Kawaii art style and travels for work between Pinz-n-Needlez Tattoo in DC and TNS Tattoo in Osaka, Japan.

She also came to Towson in order to see the “Perseverance” exhibit and said that Japanese tattoos, specifically those featured in the exhibit, “inspire her in her own artwork.”

Tiaira Bates, a junior and exercise science major, attended the event because she heard that free henna lessons and application were available to her. She practiced her own henna skills and said that after seeing the other designs she understood “how hard it is to perfect a design.”

Bates also visited the “Perseverance” exhibit when it first opened in February for her ART 109 class, and said that she appreciates the artwork even more now that she attended Tattoo Fest.

“I think [the Tattoo Fest] is really good, it brings another perspective to the Asian tattoo culture,” she said.

In addition to the henna tattoos, students had the opportunity to receive airbrushed tattoos using a stencil.

The Student Government Association (SGA) participated in the event by running the My Tattoo Photo Booth where those who attended could have their tattoos photographed. After, they were asked to share the story of their tattoo for the live Twitter feed for the event. Paglinauan said that these Tweets would later be archived on the Asian Arts and Culture Center website.

Paglinauan said that through the festival, they hoped to get rid of some of the lasting stigmas surrounding tattoos and tattoo culture in both the United States and Japan.

“We were really lucky to get this exhibition and so we were trying to figure out what could we do with this to engage the students,” Paglinauan said. “The older generation may not be into it as much but here with this event we are trying to start the dialogue and have different viewpoints.”