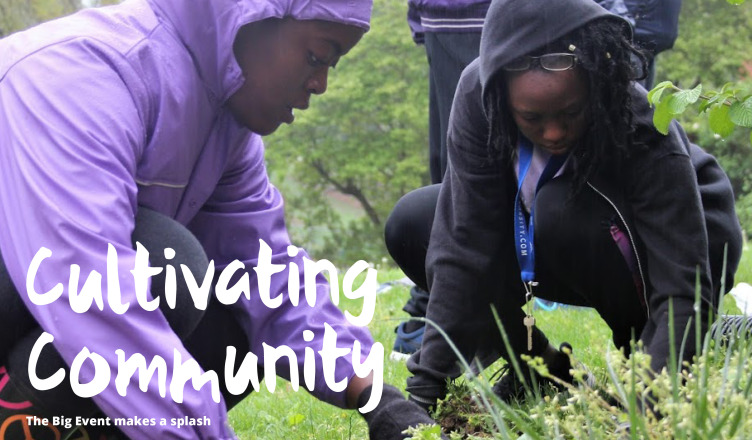 Raindrops trickle through the tree canopy as Towson University’s Black Student Union cleans up the woods behind Brown Memorial Weekday School. One by one, BSU Vice President Aaliyah Perez reaches out her hand to help her friends across the stream and soon, the club is doing their part in The Big Event.

“Once you leave college, it’s good to remember the community you came from and give back to other communities and understand those communities as well,” said BSU Vice President Aaliyah Perez. “I think it puts it in perspective, no matter where you come from, how important it is to give back and how everybody doesn’t live under the same circumstances. It’s a different experience.”

According to student coordinators for the eighth annual The Big Event, 1,800 students registered to volunteer to help clean up the greater Towson community. That’s around 700 fewer than last year’s registration count.

All photos by Marcus Dieterle/The Towerlight.

In 2016, over 2,500 students, faculty and alumni registered, but only about 1,900 actually participated, according to previous reporting by The Towerlight. Student organizer Madelynn Steinbiss attributed this year’s registration decline to the new $25 no-show fee instituted this year. She said that the lower number meant that event coordinators had to renege on some promised project sites and reconfigure groups to meet the community’s needs.

But these setbacks, and cloudy, gloomy weather, couldn’t stop a small army of Towson students from giving back to the surrounding community.

“It’s just a big deal for Towson to go back in the community and give back and it’s just something we enjoy doing,” Perez said. “It’s hard getting up in the morning, but it’s just good to give back and work with other people. The community is just so grateful every year that we do it.”

Perez, whose attendance marked her third year participating in The Big Event, worked with other members of her organization to haul mulch, remove rotting tree stumps and clean up trash in the woods behind Brown Memorial Weekday School, about a mile and a half from campus.

According to Steinbiss, volunteers served 160 project sites by picking up debris and assisting homeowners, businesses and nonprofits with tasks they needed completed. She said 20 staff and faculty, and 20 alumni, volunteered for the event.

Sophomore BSU member Russhell Ford emphasized that it is everyone’s duty to protect the environment.

“I just think it’s important to — because we’re doing environmental work — just to always remember that the environment is important to take care of just as a whole and that cleaning up is all of our responsibilities,” Ford said.

Alice Wetzel, a teacher at Brown Memorial Weekday School, worked alongside the BSU to create mulch pathways for the school’s students to walk along. Wetzel, who helps with the school’s nature coordinating, explained that the school has Forest Fridays, when teachers bring their students into the woods, where they can explore things they wouldn’t normally see in their own backyards.

“It’s amazing just having the manpower to get all these things that we’ve been wanting to get done accomplished,” Wetzel said. “This is a big community effort. It’s what gets our kids out into nature. Having these paths in where we can get into the woods safely is huge.”

“Being an RA on the SAGE floor with mostly freshmen, I wanted to show them that giving back to the community is important by getting a bunch of them to come and do The Big Event with me,” Colbert said.

Sophomore Christine Paje said that The Big Event provides a good opportunity to get involved in Towson’s surrounding communities. Her club, the Filipino Cultural Association at TU (FCAT) helped at homeowner Rose Fleming’s home by clearing her patio and pulling weeds.

“It’s a great event,” Paje said during the yardwork. “It’s a great way to connect with the community. It’s good for everyone. The students get to know the community a little bit better, especially if they don’t live around here.”

“I really respect nature and respect that we’re not the only ones here,” freshman Tiger Lillies fundraising chair Lauren Thompson said. “And so cleaning up, making sure the animals have their space, is just really encouraging to me and so I was happy to help.”

AGD sister and sophomore Olivia Chapman said that events like The Big Event can help to give Towson’s Greek Life a better reputation.

“I think we get a bad rep as college students, Greek Life especially,” Chapman said. “So I feel like by giving back to the community it gives us a better rep and we have fun and prove that we’re not just about what typical college students are about.”

Conrad Provan, a senior biology major and naturalist at the Lake Roland Nature and Environmental Education Center, said he hopes that The Big Event makes students more aware of the community beyond campus.

“A lot of people who come here actually don’t realize that the park is this close to campus, so it gives them the opportunity to see this is what we have,” Provan said. “And also it gives them the opportunity to say ‘We’re not just here to get a degree. We’re also here to make the place that we’re going to a better place to live in, to keep it clean and also to say thanks to the nature for giving us all the beautiful things that it provides.’”

Director of Civic Engagement and Leadership Chris Jensen said he believes students participate in The Big Event because of their altruistic nature.

“They’re part of Towson, they see Towson as their home … and so I think they want to be a part of it,” Jensen said.

At the end of last fall semester and the beginning of this spring semester, students hung door hangers on community members’ doors to spread the word about The Big Event and invited them to request students to assist with any tasks they needed completed, The Big Event’s marketing co-chair Anna Gibney said.

“There are so many single families or elderly couples that live in the area that truly need the help,” Gibney said. “What our students are able to do in just a couple hours, it would have taken them months, potentially, to get finished.”