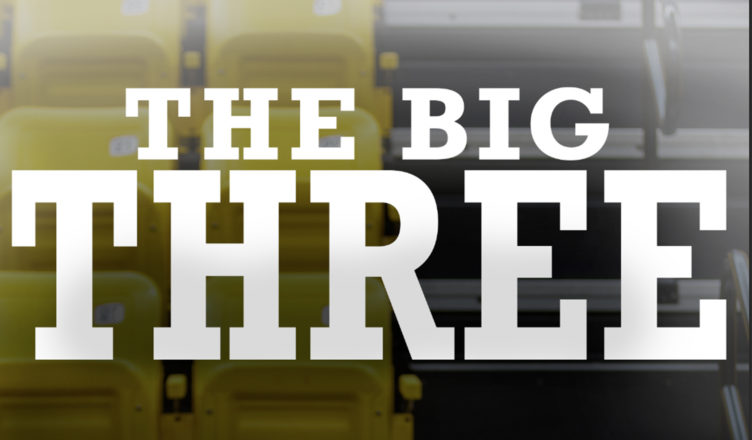 Towson University women’s basketball head coach Diane Richardson wanted to forge a culture of family and positivity from the minute she arrived on campus. She wasn’t afraid of adding players with different backgrounds either. It was that culture, that belief, that family vibe that led to the gathering and achievements of the Big Three.

“I knew that for them to be good, they need to be loved too,” Richardson said. “That’s just the kind of person I am. I wanna be their mentor. I wanna teach them how to get the best out of whatever their circumstances are, and this has been the way to do that with these young ladies.”

Senior forward Nukiya Mayo, redshirt junior guard Kionna Jeter, and redshirt senior guard Qierra Murray are the Big Three. The three veterans have accomplished plenty. Not only are they members of the 1,000-point club, but they also led the Tigers to their first Colonial Athletic Association (CAA) title and NCAA tournament appearance.

“The bond that all three of us (have), it’s like, you got your 1,000, I got my 1,000, you got your 1,000.” Jeter said. “It’s like that connection with all of us, being in tune with each other. Our teammates involving us in everything. Believing in us to do what we can do.”The Big Three call Richardson their grandmother, someone who dishes out as much wisdom as she does love. That’s the most reliable refrain the trio has for coach Richardson, that she’s loved and cared for them as if they were blood.

According to Richardson, each relationship is different. She said Murray is her most reliable member, willing to do whatever she has to for her family. Jeter is Richardson’s mini-me. Mayo is her hardest worker.

Richardson said when she first came to Towson, she told everyone at the time that they would all score. Most looked in bewilderment, especially Mayo. After all, the guards were the leading scorers at the time. But, as her skillset evolved and she started to see the gradual fruits of her labor, Mayo became one of the first players to fully buy into the regime and culture change.

“[Mayo’s] been like a sponge ever since and opening up,” Richardson said. “ You can see the difference in her game right now. She’s so diverse. And she’s the first one who bought [in] and said  I think we’re gonna be better. She went through a lot her first year and she’s turned that stuff around.”

Mayo’s ability to embrace this culture change has led to big results for herself and the team. When the Tigers clinched their first CAA Championship last season, Mayo was named the CAA Tournament’s Most Outstanding Player and finished on the conference’s All-Defensive team.

Jeter embodies it all. The prolific guard has had to fight through constant battles in her short life, including being shot in the back and nearly losing her chance to play Division I basketball. When Jeter got off the phone with Richardson the first time, Jeter said she prayed and thanked God that someone believed in her.

Despite a number of uncontrollable situations happening around her, Jeter said she was grateful someone saw beyond it and believed in her, the person, and the basketball player. As she reflected on her first summer at Towson, Jeter said when she was finally cleared to practice during the last semester, there was a sense of arrival. She said that after practice she felt as if the time off from rehab didn’t take anything away from her game.

“I know myself,” Jeter said. “I know that I’m not going to give up. I know that whatever I got to do to get back on that court, that’s what I’m going to do.”

Jeter’s first season in Towson came with numerous accomplishments. She was named to the All-CAA First Team and finished with the second-most points in season in Towson history with 572 and led the

Murray, a Baltimore native, arrived at Towson after bouncing around from George Mason and Appalachian State. The two stops just weren’t the right fit for her, Murray said. In fact, she summed up her time at Appalachian State as okay, the only thing is it ended unceremoniously when she was forced off the team.

That decision by her former coaches led to Murray not touching the ball for nine months, which Murray said resulted in depression and being unsure of her future in college basketball. So, when she heard about Richardson becoming the head coach at Towson, Murray had to reach out. The two have known each other since Murray was in eighth grade.

After Murray spoke to Richardson and saw the family-first culture, she said she was ready to come back home. As her time as a Tiger has moved along, she revealed that this program is the most close-knit she’s been on. Now, as an elder stateswoman, Murray is insistent on paying it forward. After all, as a record-setting point guard for assists in a single season, you have to make sure everyone is okay on and off the court.

“Right now I’m kinda like the team mom,” said Murray, who graduated with a psychology degree last spring. “Coach Rich always says, ‘Oh, you’re everyone’s blankey.’ Everyone comes to me with their issues, whether it’s on or off the court.”

With Mayo and Murray finishing their final season as Tigers, the Big Three may be coming to an end, but their legacy isn’t quite finished. According to Richardson, their ability to hold each other accountable has helped them overcome the adversity they have faced, showing off a resilience seldom seen in young adults.

“I think (our) legacy will be stamped for life,” Jeter said. “From the team last year and the team this year. Us three have that bond where it might bend, but don’t break. We all have accomplished so much together being by each other’s side and doing it (with) class. Putting each other in a position to be as successful as we are. Our legacy will remain stamped on Towson, forever.”

The Big Three’s swan song season has had its share of ups and downs. A difficult non-conference schedule prepared the Tigers to defend their conference championship as the team with a target on their backs.

Currently, Towson sits in fourth place in the CAA Standings, which is the same spot they were in heading into last year’s CAA Tournament.

As Mayo and Murray prepare to move onto the next phase of their lives, a new generation of Tigers look to pick up where these two left off.

Sophomore guards Myasia Jones and Shavonne Smith have already shown their ability to produce offensively. Jones has averaged 9.2 points per game and Smith has appeared in 25 of the team’s 27 games.

The accomplishments achieved by Towson’s Big Three are sure to be remembered for years to come as they have helped turn the program into a yearly success within the CAA.