As one of the Western Conference’s top teams, the Denver Nuggets led by All-Star center Nikola Jokic are starting to turn themselves into a perennial playoff team. However, now they have a player that may just lift them into true championship contention: forward Michael Porter Jr.

After missing most of his freshman season at Missouri and the entirety of his rookie season last year due to back injuries, Porter Jr. slowly was turning into the biggest “What if” coming into the 2019 – 2020 season. Porter Jr. was once ranked as the number two prospect in the ESPN 100 only behind forward Marvin Bagley III coming out of high school in an elite 2017 class with the likes of guard Trae Young, center DeAndre Ayton and others. As an athletic, high volume shooter in high school the potential to be an elite scorer at the pro level has always been there, but the injury risk continued to be Porter Jr.’s kryptonite.

His minutes have been up and down this season, with as few as three minutes and as many as 29 minutes of playing time. But as of late, Porter Jr. has caught fire as a bench scorer for the Nuggets and is making the narrative less about how much he plays and more about what he does when he gets in the game.

Listed at 6-foot-10, 215 pounds, this rookie forward has slowly started to show off his talent as a scorer that put him on the national map as a high schooler. In the eight games this season Porter Jr. played more than 15 minutes, he has scored double figures in all but one of those games. With big time scoring nights like 25 points against the Indiana Pacers, 19 points against the Charlotte Hornets and most recently recording his first NBA double-double with 18 points and 10 rebounds against the Golden State Warriors, Porter Jr. is gaining momentum and is already catching the eye of the national media.

Paul Pierce, former NBA all-star and member of ESPN’s NBA Countdown show, went as far as comparing Porter Jr. to a crossover between Kevin Durant and Tracy McGrady, two of the NBA’s greatest scorers to ever play the game. Amin Elhassan of ESPN’s The Jump continued the praise saying that Porter Jr.’s emergence has raised the level of Denver’s abilities, giving them another weapon on their already relatively deep roster. For good reason, these comparisons and high praise are starting to spread across the NBA landscape as Porter Jr. continues to rack up great scoring nights, but the most impressive part of his game is his efficiency.

As a power forward with ball handling ability, significant range as a shooter and the frame to drive into the paint for athletic finishes at the rim, Porter Jr. has the capabilities of a multifaceted offensive player. Currently shooting 53.9% from the field and 40.6% from three, Porter Jr. is an efficient shooter that can put the ball in the hoop at a high rate. It may not seem like he is an elite scorer when you look at his complete stat line. He is averaging 7.2 points per game, 3.7 rebounds, and 0.7 assists. However, when you factor in that he has been on a minute restriction practically all year the numbers are actually pretty skewed.

Am I saying that he is a guaranteed Lou Williams or Jamal Crawford-like bench scorer that can give you 20 points a night? Not necessarily. But I will say that his recent success and the significance of his performances when given more minutes does show that over time Porter Jr. could go from just being one of the Nuggets many weapons to being one of their lead scoring options.

Sitting in second place in the Western Conference with a record of 30 – 13, Denver is starting to really catch their stride as we approach the All-Star break and Porter Jr. has a lot to do with that. He may not be the best player on the team or anything like that, but Porter Jr.’s recent emergence is the lost gem the Nuggets have been searching for that might just put them over the hump as real championship contenders. 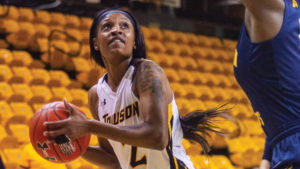