Coming into this postseason, we all had a few specific matchups that had our heart jumping for the playoffs to start. Questions like “Could Houston really take out the Warriors?” “How far can Giannis Antetokounmpo lead the Bucks through the playoffs?” and “What will forward Kawhi Leonard bring to this new version of the Toronto Raptors?” all plagued every NBA conversation the postseason was quickly approaching. With so many questions about all the teams led by top-tier NBA talent, we somehow forgot how good the Nuggets and Trail Blazers are.

The Denver Nuggets have spent the entire season being doubted after coming off two straight years of missing the playoffs. With no true superstar, or at least none we knew of to start, the Nuggets shocked the world by obtaining the second seed in the Western Conference. Players like forward Nikola Jokic, guard Jamal Murray, and forward Gary Harris have all stepped up this season, knocking at the door of championship contention all season. But, coming into the playoffs, questions of youth and inexperience plagued them as they faced off against one of the most playoff tested rosters in the San Antonio Spurs. After a hard fought seven games, led by the heroics of Murray and Jokic both averaging over 20 points per game, they now are in the heat of the conference semifinals.

On the other hand, the Portland Trail Blazers have a similar yet unique path in comparison to the Nuggets. Unlike the Nuggets, the Trail Blazers had two notable stars is guards Damian “Dame Dolla” Lillard and CJ McCollum, who are ranked amongst the best backcourts in the league. The problem with this team was less about their ability to reach the playoffs and more about their lack of success once they got there. After a disappointing end to the season last year, being swept by the New Orleans Pelicans, the Blazers had serious questions about the future of the franchise. Entering these playoffs, they were counted out against the star power of the guard Russell Westbrook, forward Paul George and the Oklahoma City Thunder, but that did not stop them from taking OKC out in only five games. It did take the “shot heard round the world pt. 2” by Damian Lillard to finish them off, but it put the Blazers on the map as a legitimate threat this postseason.

Fast forward to Game 3 of Portland vs. Denver where history was made. Noted as the longest playoff game in 66 years, lasting 65 minutes, Game 3 lasted four overtimes and ended with 277 total points scored between the teams. Led by McCollum’s 41 points, the Blazers ended the game with a win after a clutch three pointer by guard Rodney Hood in the final moments of the game.

This series has grit, emerging star power and pits two teams who are evenly matched against one another for a chance at the conference finals. This series has thriller written all over it and with the possibility of reaching a game seven, and sets a new bar for how quality NBA playoffs games are supposed to feel. 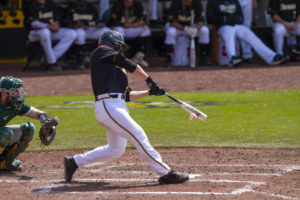