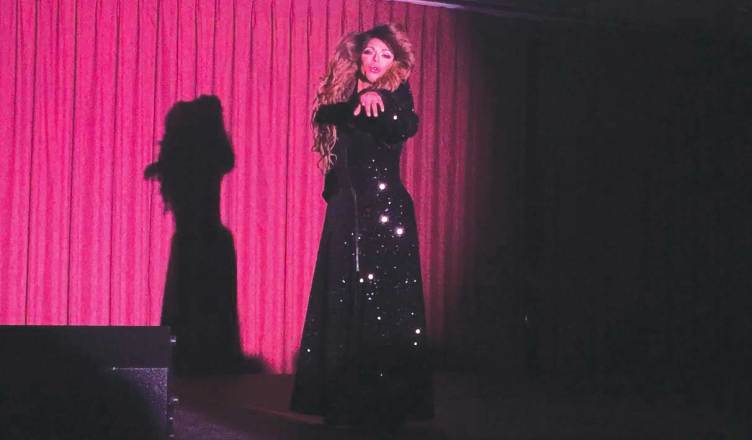 The past two years of college have taught me a few great things: professors work even harder than we give them credit for, (almost) everyone you meet at Towson will make your college experience better and drag shows are best attended with no preconceived notions in mind.

That last one seems a little out of place and, believe me, I didn’t think it would make that list either, but Nov. 30 definitely changed any expectations.

I had never been to a drag show, or even seen a queen in real life — the closest I’d gotten is my grandmother, a New York Jew with big makeup, bigger hair, even bigger heels, and the biggest attitude by far. Honestly, I found myself sitting in the University Union’s Chesapeake Room at 7 p.m. on a Thursday evening wondering what the hell I was doing.

The girl in front of me had a bunch of one-dollar bills sticking out of her UGG boot, as did the kid behind me with a medical boot and crutches. Each were contributing to the buzz of murmurs I could barely hear over the dramatic covers of “Hallelujah” and “Blank Space,” and any time there was a lull in the music, the talking swelled.

I was in a seat next to an aisle, in case I needed to get up and take photos from a different angle, but I definitely considered switching seats when one of the event coordinators walked past and, in conversation with another coordinator, said, “We need to make sure the aisles are clear because they’ll be walking up and down them.”

Wait, who will be? There was a clearly defined stage front and center in the room, and the first two rows of seating were labeled “VIP.” Were the aisles and front rows like the splash zone at SeaWorld?

I didn’t find out because as I was wondering what I was in for, the lights dimmed and the most outrageous voiceover/song began to play, which advised people to ensure their flash photography was enabled, among other things.

“Some of the most beautiful women in the world have gigantic penises,” coached the intro, and then the emcee for the night, Miss Brooklyn Heights, came walking down the center aisle from the back of the room.

Any confusion about pronouns aside, Miss Brooklyn Heights was the most confident person I’d ever seen. She appealed to the audience with lots of affectionate “bitch!” exclamations and lively comments — when she asked who had traveled into the area for the show and someone replied they’d come all the way from Oklahoma, for instance, she snorted and questioned why the audience member was there.

The music started, Miss Brooklyn Heights started lip syncing, people started holding out ones for her, phone cameras started flashing, the audience started cheering, and I thought to myself “We’re definitely not in Kansas anymore.”

It was unlike anything I’d ever experienced. Miss Brooklyn Heights wove between rows of people, taking selfies on people’s phones, collecting ones, and giving sexuality-bending lap dances, all while lip syncing to a song I’d never heard before.

And that was that.

Miss Pariah Sinclair was next onstage; she was a Towson alum whose first performance was a lip sync to the song “Smell Yo Dick” by Riskay. By the time it got to the 2017 Baltimore Drag Awards’ “Best Newcomer in Baltimore” winner Miss Tara Evans, who death-dropped, twerked and did the splits, I (and any other drag show “virgins”) had definitely gotten the hang of things — if a queen was approaching you and you had a dollar, you’d better be waving it for her.

Early in the night, Miss Brooklyn Heights took a survey of the room, asking how many gay guys, straight women, and gay women were in the room before saying, “And now the one I know we’ve all been wondering: are there any straight men in here?”

One hand in the front row went up, and the entire room laughed, but we all soon found out who he was. Eighteen-year old queen Miss Jasmine Hoe was performing in front of a crowd like that for the first time, and her mother and father were sitting front-and-center to support her.

This was the first time I really got a sense of the true appeal of a drag show. It wasn’t just vulgar jokes and Miss Brooklyn Heights describing the process of “tucking” to the audience. A drag show was about a community of people whom society saw sideways, craning its neck to try and understand. This community looked crazy to some, with their hair and makeup and unitards and heels, all the glitz and the glam and the false eyelashes, but in the end it was about making each other feel like royalty even if no one else would. If you wanted to be a queen, they would give you your throne.

Watching Miss Jasmine Hoe strut around — her lips syncing, hair bouncing and hands reaching for ones — gave me such a profound sense of joy because even though I didn’t know what she was experiencing right now — the nerves, the excitement, the feeling that maybe this was exactly what she had always wanted but had never known for sure until now — I understood. I got it. This night wasn’t about dressing up and disguising your societal identity; it was about baring yourself — your true self — to strangers without any judgment. And I felt as proud as Miss Jasmine Hoe’s dad Vince, sitting front-and-center, getting a video of the whole thing.

After Miss Jasmine Hoe was done, out came Miss Anastasia Belladonna, whose performance of “Love on the Brain” marked her ten-year anniversary of participating in the Towson University Drag Show. Then came Miss Iyana Deschanel, who had two sons with and was happily married to Miss Brooklyn Heights.

After Miss Iyana Deschanel was Towson organization In The Life’s own Miss Washington Heights, whom Miss Brooklyn Heights identified as her “drag child” and who was responsible for putting the whole show together. Then came Miss Shawnna Alexander, Baltimore’s No. 1 Queen of Comedy.

Next onstage was the headliner, RuPaul’s Drag Race’s own All-Star, Miss Shangela Laquifa Wadley, who performed and then had a few words for the Towson audience.

“Don’t be afraid to do the work to get where you’re going,” Miss Shangela said. “It’s not about that one particular race, it’s about the marathon.”

“Just like Shangela, you can always bounce back,” she called over the crowd’s cheers. “I’m going for the crown in All Stars season three, and I’m not holding back, baby.”

When Miss Shangela learned that it was Towson’s 10th year hosting the Drag Show, she joked, “Thats a lot of drag,” but had a serious message about it.

“Because you supported this show for twelve years, this show continues to grow, we’re able to come here and have a good time,” she said. “This is a safe space. This is the time when you figure out who you are, but also you need to learn a lot about other people…. There are people from all different walks of life here, and when you can open your mind, and be so open to other people, it makes you a better person.”

The night went on, the queens each performed again, the one-dollar bills dwindled, and the cheers grew hoarse, but by the end of the show everyone was still excited. While Miss Shangela had a meet-and-greet, the other queens hung out and spoke with audience members.

When she was a student at Towson, Miss Pariah Sinclair majored in marketing and PR, and had picked up a minor in theatre.

She said being a part of Towson’s drag show was what got her into drag.

“I started helping out with it three years ago, just volunteering, and then I helped host it in drag a year and a half or two years ago, and then I started performing three shows ago,” she said.

Miss Pariah Sinclair gave her own words of advice for budding drag queens.

“Invest your money,” she said. “It takes time. It takes time. Don’t be afraid to be ugly, I think that’s the big thing because a lot of queens want to come out and be like ‘Oh, I’m gorgeous!’ and no, that’s not going to happen. Take advice. Go on YouTube, but know your face. Find out what works for you. Find who you are as a character, as a queen, and it’ll build from there.”

All in all, the night was a huge success, according to junior theatre studies major and In The Life member John Patterson.

“Drag is a very important and integral part of queer community,” Patterson said. “It stems from a lot of oppression and people not being able to express their gender identity, so it’s really become an art form, and a form of self-expression.”

After that night I can honestly say Miss Shangela was right; in a room full of people so encouraging and accepting and supportive, I was glad I’d opened myself up to the experience because I felt changed.

If none of this makes any sense to you, that’s okay. All I know is that, between Miss Shangela turning her passion into her profession, Miss Anastasia Belladonna’s ten-year anniversary performance, Miss Iyana Dechanel’s and Miss Brooklyn Height’s family, and Miss Jasmine Hoe’s debut performance with her parents looking so proud, drag is something to nurture and let flourish, because I’ve never seen something so simple make so many people so happy.