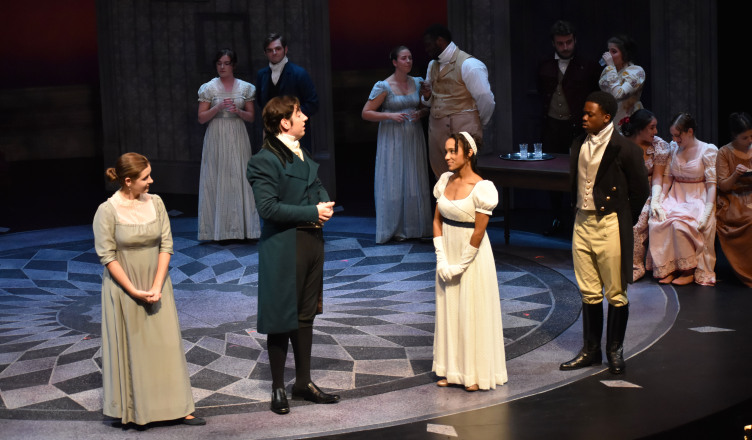 The department of theatre arts  is presenting the play “Pride and Prejudice,” adapted by Christina Calvit and based on the novel by Jane Austen, from Oct. 12-21 in the Center for the Arts Mainstage Theatre.

“Our production is very lighthearted in many ways,” Satta said. “We have little anachronistic touches throughout to sort of give a wink and a nod to say, ‘This is actually a very modern woman and a very modern human story despite the bonnets and the boots.’”

There have been many different adaptations of Jane Austen’s novel “Pride and Prejudice” including fanfiction, sequels, prequels, films and other plays. Satta spoke with Jane Austen scholars in order to find the perfect dramatic adaption of the novel. Satta said that the adaption he chose is tight, fluid and has the most sense of fun in it.

“It was one of the few adaptations that really highlights the moment when Lizzy realizes that she’s been at fault and has had her prejudices,” Satta said. “Lots of adaptations feel like a rom-com – clever woman tames arrogant man – and they leave out the idea that both of them need to grow as people, each to be worthy of the other’s love.”

Harvey said there are some moments in the show that he is looking forward to because he cannot wait to see how the audience reacts.

“There is more of a comedic element than I think people probably expect, and there are some really funny things that Steve Satta has done,” said senior acting major Maddie Dominiski, who plays the housekeeper.

Rich said that she believes Elizabeth values honesty, respect and intelligence more than anything.

“One of my favorite moments in the show is the Darcy proposal,” Rich said. “Even though Lizzy is, at this moment, still oblivious to some of her flaws and ignorance, she stands up for herself and her worth in response to Darcy’s, though well-meant, insensitive proposal. Lizzy is a woman who refuses to compromise herself, and that is something I both admire and can relate to.”

The relationship between Elizabeth and Mr. Darcy was clear, and each character had a sense of pride and some difficulty expressing themselves.

“I could not have asked for a better Darcy to play alongside,” Rich said. “The moment I discovered Isaiah was to be Mr. Darcy, I felt confident in the fact that he would put forth his best, and that he would do the work. And it is a joy taking this journey with him every show.”

“It’s fun to be playing period music for a production based on a book I really like,” Casciero said.

Bellassai said he likes the incidental music throughout the show and the dances because the dance department was really good at showcasing historical dances.

“Incidental music is the most fun because it’s like a silent movie accompanied by piano. The music is like sound effects,” Bellassai said.

“The dancing was so much fun, so it was so lovely to learn three or four dances,” said sophomore acting major Jennifer Yarmis, who plays Lydia. “That was just a wonderful opportunity.”

The show incorporated audience participation in the dances throughout, which involved clapping while watching the actors dancing around in the ballroom scenes.

Domininski said that until the cast was introduced to the dances, they didn’t totally understand what it was like to exist in Austen’s time period.

“There are such specific formalities that you have to be aware of,” Dominiski said.