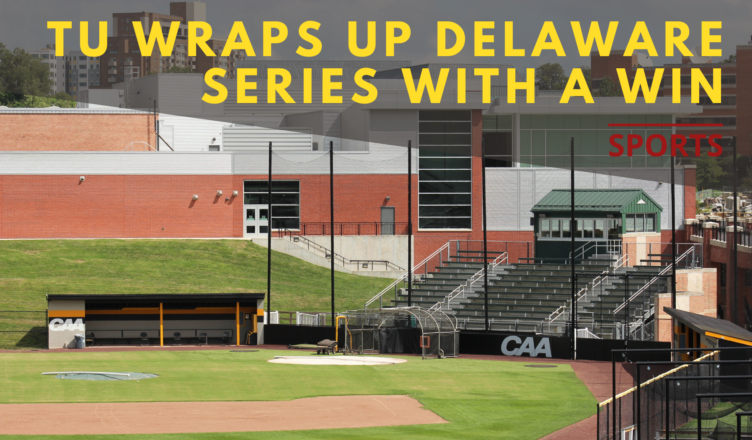 Towson University’s Baseball team concluded a four-game series against The University of Delaware with an 8-3 win on Sunday, April 4.

“It was a big win because it gave us the series and I think we just came out ready to play,” Head Coach Matt Tyner said. “It was just a continuation of the last two games and I can’t say enough good things about our guys.”

In the first inning, graduate outfielder Billy Godrick stole his seventh base of the season, making him 7-8 in stolen bases. Senior infielder Noah Cabrera found the gap in left-center for a base hit RBI, and sophomore outfielder Javon Fields picked up an RBI off a sacrifice bunt.

“Our game is to make any opposing pitcher throw pitches and I think our hitters did a phenomenal job there of staying with our plan,” Tyner said. “…Our job is to put pressure on the pitcher, put pressure on the defense, and win ugly. We just call it a pressure offense and it seemed like it served us well today.”

In the second, Ramanjulu gave up three consecutive base hits and Delaware scored their first run on a fielder’s choice. Ramanjulu got out of the inning with a swing and miss. The Blue Hens tied it in the third with a home run to right field near Delaware’s dugout. A double on the next at-bat also scored a run.

Ramanjulu’s day was done after three innings. He allowed six hits and three earned runs. Graduate right-hander Kody Reeser took the mound in the fourth and struck out two batters.

“Ramanjulu is a pitch-to-contact type guy and these guys are pretty good hitters, the minute you get the ball up a little bit, they’re very free in regard to their swinging,” Tyner said. “They swing more than we do, those guys are up there to hack. Sometimes if you put a ball up they put a good barrel on it. …But he can mix it up, today he did what we needed him to do.”

A throwing error by the third baseman in the fourth put freshman catcher Burke Camper on third. After a sacrifice bunt, Camper tried to score but was ruled out. After loading the bases, Mervis was pulled after 3.1 innings and allowed two hits and two earned runs. The Tigers tied the game on a fielder’s choice and took the lead on a rundown between first and second as the runner scored from third.

Godrick and redshirt freshman infielder Danny Becerra each made defensive plays in the fifth, including a diving catch from Godrick. He made another tough catch in the ninth for the second out.

“I love making plays for our pitchers, I know those guys battle their butts off, work hard all week and it’s great to award them with a nice play,” Godrick said. “…Anytime you can steal a hit, steal a double it gets the momentum back to our dugout.”

Reeser completed three innings and struck out four without allowing a hit or run, and only two runners reached base from errors. Freshman right-hander Andalo Santangelo took over in the seventh, allowing one walk.

“All three pitches were working, so I felt pretty comfortable going into all three pitches in any count, which when you’re a pitcher and you can do that it makes the game a little easier,” Reeser said. “I felt the defense played fabulous behind me, had some good plays in right field, good plays in short, and the catcher was catching the ball well.”

In the seventh, Godrick hit an RBI double that extended Towson’s lead to 5-3. Young’s hit down the right-field line allowed Godrick to score from second. Another base hit brought home two runs after another error. Both teams combined for eight errors through seven innings.

“We were getting our walks early, and then we just couldn’t come through with that big hit,” Godrick said. “…In the seventh inning, we got a couple big hits, broke the game open. Early it wasn’t working for us but we stayed with it.”

Santangelo was pulled after the seventh. He pitched 1.1 innings and did not allow a hit or run. Senior southpaw Austin Weber started the eighth, he allowed two hits but ended the inning with a strikeout. Junior right-hander Jake Pecilunas finished the game on the mound.

“It’s good to have a team win, I think everybody contributed today,” Reeser said. “It’s a confidence booster for our whole team, not just the pitchers. When a team can win three out of four it’s always nice.”

Towson returns home to face Navy on Wednesday, April 7. The first pitch is scheduled for 3 p.m.