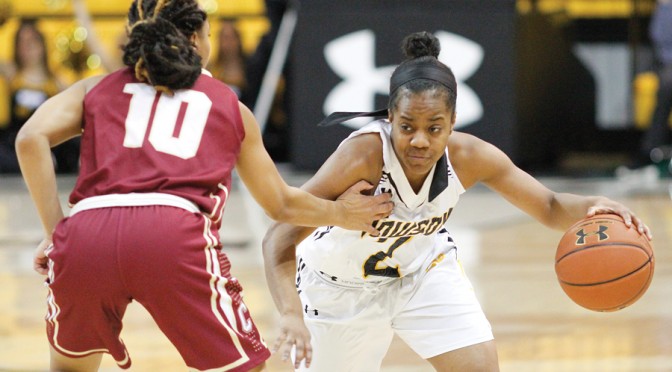 Towson’s nine three-pointers helped the team cruise to a 71-49 win against College of Charleston on Sunday at SECU Arena.

“I think our young ladies were able to come out and be really aggressive at the beginning of the game,” Head Coach Niki Reid Geckeler said. “That’s going to be our identity from here on out. We’ve got to play with a sense of urgency.”

Senior forward Camille Alberson started the game with a three-pointer in the first 30 seconds. Senior forward LaTorri Hines-Allen extended the lead to 5-0 after a layup on the next offensive possession. Hines-Allen scored another four points and the Tigers (9-13, 5-5 Colonial Athletic Association) jumped out to a 9-2 lead in the first three minutes of the game.

Hines-Allen opened up the second half with a layup in the first 15 seconds and Alberson hit her third shot from beyond the arc in the game on the next possession, which gave the Tigers a 42-23 lead. The Tigers extended their lead to 47-27 a few minutes later off freshman guard Shanea Butler’s jump shot, which was assisted by freshman guard Breonn Hughey.

Johnson hit her fourth three of the game with less than 11 minutes left in the game and extended the Tigers lead to 55-35. Towson had a 25-point lead a few minutes later after another three from Johnson.

The Tigers had their biggest lead in the game off a layup from senior guard Markell Smith, in which she converted into a three-point play after being fouled on the shot. Smith’s layup came off a steal from senior guard Ciara Webb, who found Smith in the paint on the transition. The play gave the Tigers a 28-point lead with less than five minutes left in the game.

Johnson led the team with 19 points, which including five threes. Hines-Allen finished with 12 points and 15 rebounds, which was her 11th double-double of the season.

“Coach [Geckeler] set goals for us this game and if we didn’t meet them, we’d have to run, so we’re going to run Monday’s practice lighter,” Hines-Allen said.

Hines-Allen said the team benefitted from everyone getting involved on the offense.

“It just opens up the floor even more because if it’s just one or two people scoring, then they can collapse on us, but if everyone is on and scoring, then it’s pick your poison,” she said.

“We’ve have to grind it out. It’s just going to be a grind from here on out,” Geckeler said.