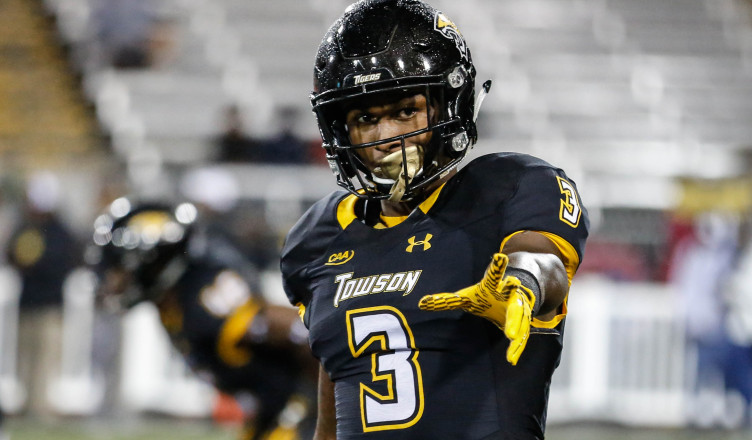 “I was really impressed by how these young guys just decided that the distractions weren’t going to get in the way,” Head Coach Rob Ambrose said. “Good teams find a way, especially far away from home.”

Despite an attempt from Saint Francis (PA) to ice O’Neil, the New Paltz, New York, native hit a 43-yard attempt in the final seconds of play to secure Towson its second win of the season.

The Tigers (2-1) handed the Red Flash (2-1) their first home loss since 2014 thanks to an impressive final drive led by redshirt freshman quarterback Ryan Stover. Stover led the team from its own 16-yard line into field goal range in the final 2:24 of play.

Stover looked confident on the last drive, completing four straight passes to get Towson to its own 41-yard line. Saint Francis committed a costly targeting penalty, then Stover connected with junior wide receiver Jabari Greenwood to set Towson up at the 21-yard line.

Towson kneeled the ball to milk the clock, then O’Neill drilled the game-winning field goal with room to spare.

“I thought he played well, he was very poised,” Ambrose said. “Anybody that has ever followed Towson football, exciting finishes is kind of like what we do.”

The Tigers overcame a turnover-filled first half. The offense struggled to convert on scoring opportunities, fumbling the ball on its first three consecutive drives in the red zone.

The Red Flash capitalized on the first fumble, scoring on a short touchdown pass to cap off a 95-yard drive.

Towson’s offense gained momentum in the second half, hitting a 33-yard field goal midway through the third quarter to get on the scoreboard.

Stover put together another scoring drive early in the final quarter. His biggest play came when he scrambled for 31 yards and took a late hit penalty on the play to put the Tigers in the red zone.

Three plays later, freshman running back Adrian Platt plunged into the end zone for his first career touchdown to give Towson a 10-7 lead.

Later in the fourth, O’Neill hit his second field goal of the night to give Towson a 13-7 lead with 3:42 left in the game.

Saint Francis responded quickly, scoring another short touchdown to take a 14-13 lead over Towson. The touchdown gave Saint Francis its last lead of the game before Stover led the game-winning drive.

“A really young group of kids found a way to win a ball game with a whole bunch of injuries and a bunch of stuff going against us, far away from home, against a playoff team,” Ambrose said.

Towson will look to carry its momentum into the final matchup of its three-game road trip as the team begins Colonial Athletic Association (CAA) play at Stony Brook on Saturday. The teams will match up in Stony Brook, New York. Kickoff is scheduled for 6 p.m.