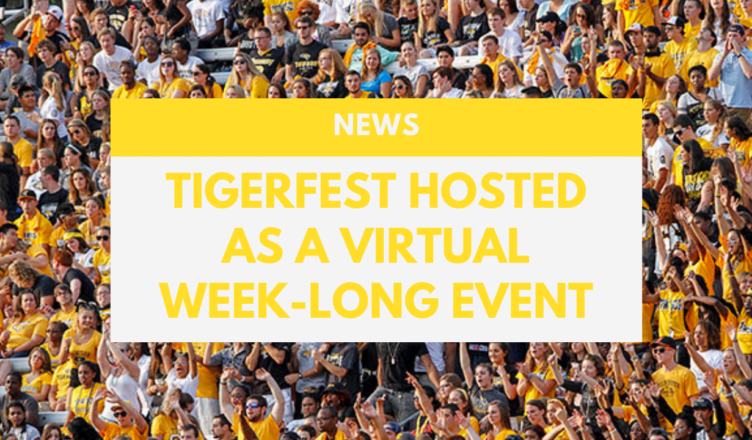 This year’s TigerFest theme, CABchella: The Revival, was inspired by the cancellation of last year’s event and having a fresh start.

“We brainstormed, had everyone kind of drop in their ideas, and one of the names, CABchella, stuck out to me because [TigerFest] is multiple days, Coachella is multiple days,” CAB Director Julia Nduka said. “We wanted to go on that sort of theme. Then we decided to add ‘The Revival’ because obviously last year we didn’t have TigerFest so it’s a revival of TigerFest.”

According to Nduka, CAB decided to spread out TigerFest as a week-long event, separating it into three main days, Monday, Wednesday and Friday, while having smaller events on Tuesday and Thursday.

On April 12, CAB kicked off TigerFest with an in-person Met Gala, featuring a virtual concert with Lucky Dave. Throughout the week, there was a “Battle of the DJ’s” virtual event, “CAB Carnival,”“CAB’s Got Talent” talent show and “All Around the World,” featuring virtual performers from different ethnicities.

Nduka said that during the planning process of TigerFest, members of CAB were able to pick what theme they gravitated toward and from there were allowed creative freedom to develop events that would fit into their theme.

“We kind of had them think about what kind of advice would fit within your theme,” Nduka said. “For our Cab Carnival, for example, we had our programmers and marketers for that event kind of find different artists or performers within that.”

Nduka expressed how there have been so many positive reactions from students this year.

“It’s been amazing, like everyone has been so receptive and so excited about TigerFest this year so it’s been rubbing off on me,” Nduka said.

According to CAB Advisor, Tom Judd, this year’s TigerFest has not only been accepted by students, but also allowed this year’s CAB Board to create something new.

Judd explained that the process of planning TigerFest was one that was ever changing because of the COVID-19 pandemic and restrictions that come with it.

“The true thought process of what this year’s Tigerfest looks like really came in January because that was the point where we started having a feel for what spring looked like and what we were going to be allowed to do,” Judd explained.

According to Nduka, while the typical planning of CAB proved to have it’s challenges, the virtual setting didn’t hold many difficulties.

“I wouldn’t say anything was really difficult, to be honest with you, because I feel like the best part about planning was just everybody’s energy towards it,” Nduka said. “Everyone was really excited for each day and just putting their own spin on each day and their own creativity.”

Nduka said that this year’s TigerFest has allowed CAB to evolve as an organization and create new things together.

Junior Jennifer Holland said that TigerFest offers students the opportunity to get involved with events at TU.

“TigerFest is a great way for the school to give back to the students and allow them to take a break during a long semester and have fun, especially after midterms,” Holland said. “It also gives students a way to show their tiger pride.”

According to Nduka, the best part of TigerFest this year was just to see how much fun everyone was having with the events.

“I feel like that’s my favorite part, just seeing people enjoy it, because that’s really what we want to do, is bring enjoyment to students even amidst this pandemic,” Nduka said. “I feel like giving that to students has been just so rewarding as director.”